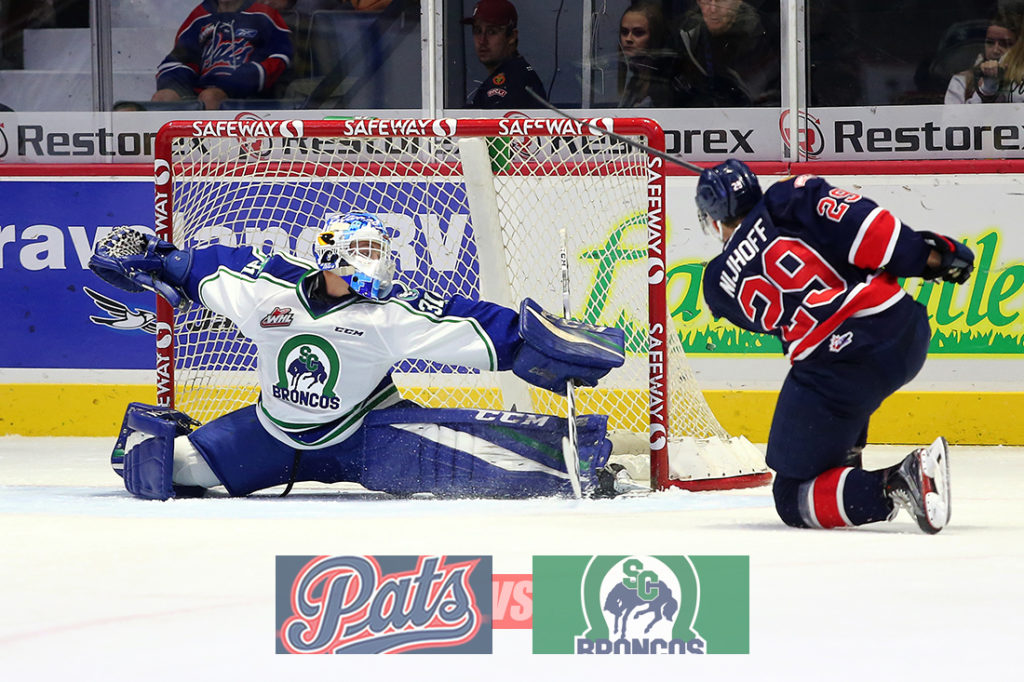 The Regina Pats (25-20-5-0) hit the road for a Saturday afternoon contest against the Swift Current Broncos (33-12-3-1). Puck drop is at 2:30 p.m. at the Innovation Credit Union Iplex. The Pats were last in action on Wednesday night, picking up a 7-3 win over the Saskatoon Blades. The Broncos were in Spokane on Tuesday and lost a third straight game, 4-2 to the Chiefs. Today is the third of six meetings between the two clubs in 2017-18, The Pats hold a 0-2-0-0 record in the season series. The game can be heard starting at 2:05 with Bennett Dunlop Ford Pats Hockey on 620 CKRM, the game will also be broadcast on Sportsnet.

The Lead Up: Steel leads Pats to big in over Saskatoon
Sam Steel put up five assists on Wednesday night as the Pats picked up a big 7-3 win over the Saskatoon Blades at the Brandt Centre. Regina got goals from Josh Mahura (17) and Libor Hajek (9) to lead 2-1 after the first period. In the second, the Pats scored three straight off the stick of Nick Henry, who picked up his eighth, then Jesse Gabrielle potted his sixth and Jared Legien his 18th to make it a 5-1 lead. Saskatoon got one back late in the second and another early in the third to draw within a pair, but on the very next shift Cameron Hebig put home his 33rd and Regina led 6-3. Hebig would add another shorthanded for his 34th to make it 7-3 and that was the final score.

Head to Head
Today is the third meeting of the season between the Pats and Broncos, Regina is 0-2-0-0 in the season series. Matt Bradley and Cale Fleury each have two goals and an assist against Swift Current, while Josh Mahura has two points. The Broncos are led by Glenn Gawdin, Aleksi Heponiemi and Tyler Steenbergen who have put up four points against Regina.

Hebig hits 200
Pats forward Cameron Hebig eclipsed the 200 point mark for his WHL career on Wednesday. The 20-year-old scored twice and had an assist to reach 202 points in 244 games. The Saskatoon product has put up four goals and nine points in six games since being acquired from the Blades ahead of the 2018 WHL trade deadline.