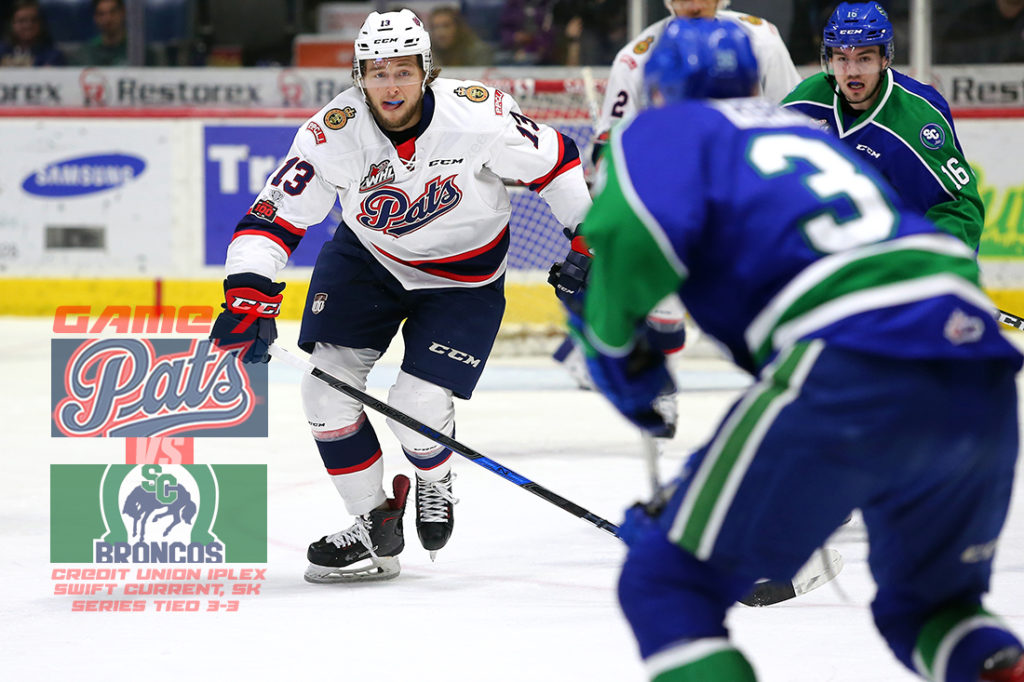 The Regina Pats (3-3) are on the road Monday for a seventh and deciding game in their first round series against the Swift Current Broncos (3-3). Puck drop is at 7 p.m. at Innovation Credit Union Iplex. The Pats tied this series at three with a 7-2 victory in game six on Saturday night at the Brandt Centre. The game can be heard starting at 6:35 with Bennett Dunlop Ford Pats Hockey on 620 CKRM. The game will also be broadcast on Access 7.

The Lead Up: Pats force game seven with 7-2 win in game six
The Pats forced a game seven against Swift Current with a 7-2 win in game six on Saturday night at the Brandt Centre. Regina got the game’s first two goals, 1:06 apart in the opening period. Robbie Holmes tipped a point shot for his first and then Cameron Hebig scored on a wrap-around for his fourth and it was 2-0 after one. In the second, Hebig added to the lead with his fifth and then Jake Leschyshyn put home his third to make it 4-0 Regina. The Swift Current powerplay got one back, but Nick Henry responded for the Pats with a slap shot from the left circle for his third and it was 5-1 after 40 minutes. In the third, Sam Steel scored his first of the playoffs to make it 6-1 and then Matt Bradley got his first and it was a 7-1 game. The Broncos got one on the powerplay late, but the Pats took game six 7-2 and tied the series at three games.

Head to Head
The Pats split the first four games of the series, winning once at home and once on the road before losing game five in Swift Friday and then bouncing back in game six at home to force this game seven. Both teams have scored 18 goals through the first six games, the Regina powerplay has gone five for 28 and the penalty kill 27 for 38. Sam Steel leads the Pats with nine points in the series, Cameron Hebig has seven points and Jake Leschyshyn five. Ryan Kubic is 3-3 with a 3.08 GAA and a .895 save percentage. The Broncos are led by Tyler Steenbergen who has 10 points in the series. Glenn Gawdin has nine and Aleksi Heponiemi eight points. Stuart Skinner is 3-3 with a 2.90 GAA and a .922 save percentage.

Steel Climbing Playoff Ranks
Captain Sam Steel reached 20th on the Pats all-time playoff scoring list thanks to his three point night in game six. He sits with 55 points in his post-season career. His two assists Saturday brought him into a tie for ninth in franchise history with 37 career playoff assists. The 19-year-old has a goal and six assist in the last three games of this series.