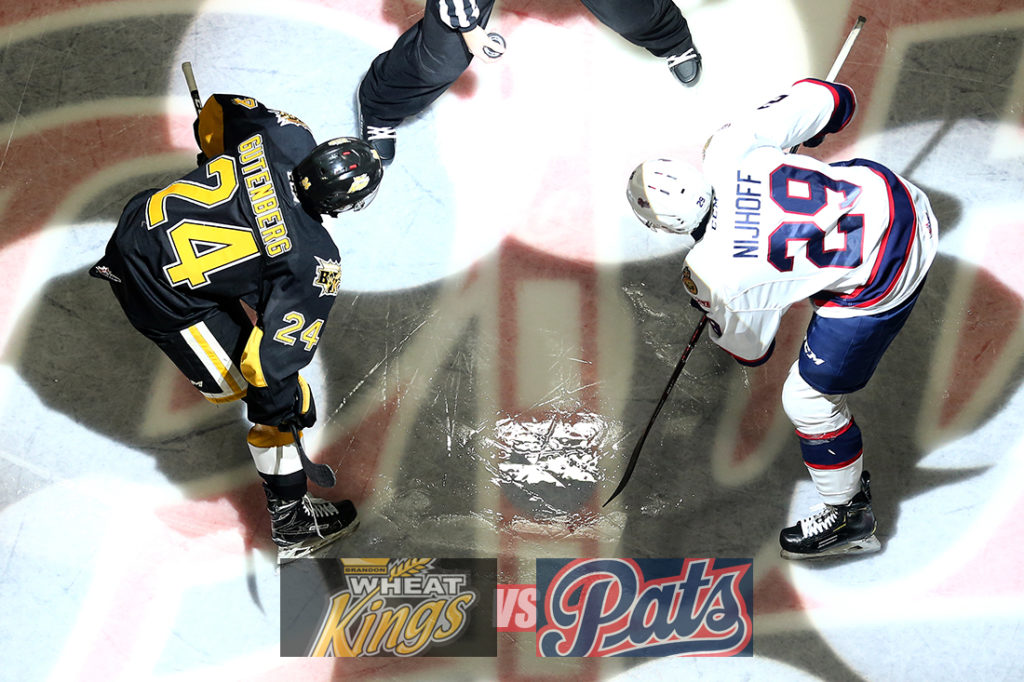 The Regina Pats (13-33-1-1) hit the road on Saturday for the back half of a home and home set with the Brandon Wheat Kings (19-19-3-3). Puck drop is at 7:30 p.m. at Westoba Place. The Pats snapped a 10-game losing streak on Friday night at home when they beat the Wheat Kings 4-0. Tonight is the sixth of eight meetings between Regina and Brandon, the Pats are 3-2-0-0 so far in the season series. Tonight’s game can be heard with Bennett Dunlop Ford Pats Hockey starting at 7:05 p.m. on 620 CKRM.

The Lead Up: Dean McNabb’s 1st WHL shutout leads Pats past Wheat Kings Friday
Dean McNabb made 30 saves for his first shutout in the WHL and the Regina Pats snapped a 10-game losing streak with a 4-0 triumph over the Brandon Wheat Kings on Friday night at the Brandt Centre. McNabb was sensational in the opening frame when the Pats were outshot 14-4, but the 18-year-old stopped them all. Late in the frame, Cole Dubinsky scored an absolute beauty after a toe drag to get in front, his third of the year and Regina led 1-0 after one. In the second, Riley Krane extended the lead with his 11th, extending his point streak to six games and the Pats led 2-0 after two. In the final period, the Pats got a powerplay goal from Austin Pratt, his team leading 18th and then Sebastian Streu picked up his sixth and it was 4-0. Dean McNabb made five saves in the third to record the shutout and the Pats picked up the 4-0 victory. The Pats outshot the Wheat Kings 36-30, the powerplay was one for six and the penalty kill went four for four. Nikita Sedov led the offence with three assists, while Austin Pratt and Sebastian Streu each recorded a goal and an assist.

McNabb Stones Wheat Kings
Pats goaltender Dean McNabb recorded his first career WHL shutout on Friday, making 30 saves against Brandon. The 18-year-old made 14 saves in the first, 11 in the second and five in the third to post the milestone. McNabb is up to five wins on the season and is 1-1-0-0 against the Wheat Kings this season.

Sedov’s Career Night
Pats rookie defenceman Nikita Sedov set a new career high for points in a game with three on Friday night against Brandon. The 17-year-old assisted on the Pats first goal in the first and both third period markers. Sedov has recorded five assists in his last four games and leads all Regina defencemen with 12 points on the season, all of them assists. Sedov was taken in the second round of the 2018 CHL Import Draft.

Pierce and Krane Keep Rolling
Pats 18-year-old forwards Riley Krane and Duncan Pierce extended their respective point streaks to six games on Friday night. Krane scored his 11th of the season in the second period, assisted by Pierce to keep the streaks alive. Pierce has three goals and four assists in that span, while Krane has scored three times and added three helpers. Krane sits tied for 17th in WHL rookie scoring with 20 points, and his 11 goals are tied for fifth.