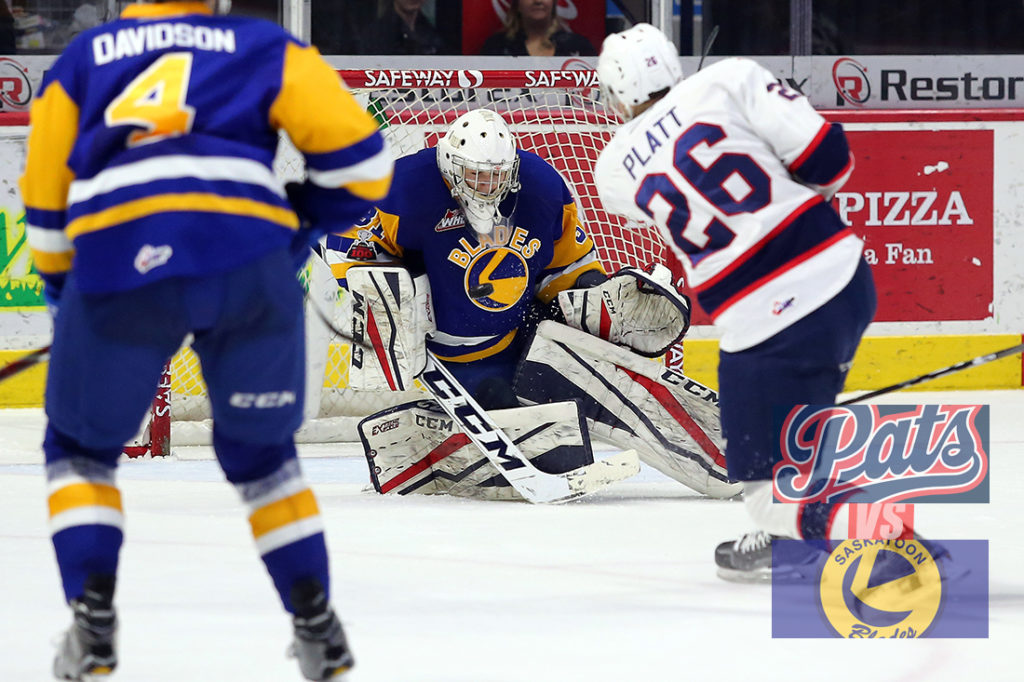 The Regina Pats (3-1-0-0) continue the 2018 WHL preseason on Thursday night on the road against the Saskatoon Blades (5-0-0-0). Puck drop is at 7 p.m. at SaskTel Centre. The Pats are coming off a weekend sweep of the Brandon Wheat Kings, winning 3-2 in overtime Friday and then 4-3 in a shootout on Saturday. The Blades were last in action on Saturday, beating the Prince Albert Raiders 4-3 in a shootout. Tonight, is the fifth of six preseason games for Regina in 2018. The game can be heard starting at 6:35 with Bennett Dunlop Ford Pats Hockey on 620 CKRM.

The Lead Up: Pats outlast Wheat Kings in a shootout Saturday
The Regina Pats came away with a 4-3 shootout win on Saturday night at the Brandt Centre over the Brandon Wheat Kings. The Pats opened the scoring when Scott Mahovlich put home a rebound for his second of the preseason eight minutes in. A minute later, Sergei Alkhimov scored from the low slot for his second and it was a 2-0 Pats lead through 20 minutes. In the second, Garrett Wright cleaned up a loose puck in the crease for his first to extend the Regina lead to three. The Wheat Kings got one back late in the frame and then added two more in the third to tie the game and force overtime. The extra frame solved nothing, but in the shootout, Sergei Alkhimov scored the lone goal and the Pats won 4-3. Regina was oh for one on the powerplay and the penalty kill went six for six. Kyle Dumba started in goal for the Pats and stopped all 10 shots he faced in 30 minutes of work. Matthew Pesenti did the rest, stopping 27 of 30.

Holmes is Back
Pats 19-year-old forward Robbie Holmes is headed back to the Queen City after taking part in rookie camp with the NHL’s Colorado Avalanche. The product of Sherwood Park, Alberta was a free agent camp invite by the Avs. Holmes picked up an assist in the third and final game of Colorado’s preseason tournament in Las Vegas. Holmes was originally an 11th round WHL Bantam pick and is coming off a career year where he scored 16 goals and had 13 assists for 29 points in 53 games. With Holmes return, there are four Pats who remain at NHL camps, Jake Leschyshyn (Vegas), Cale Fleury (Montreal), Nick Henry (Colorado) and Max Paddock (San Jose).

Sedov enjoying strong preseason
Pats Russian Defenceman Nikita Sedov is off to a great start in his first WHL preseason. The 17-year-old has points in three straight games, scoring twice and adding four assists for six points. Those six points are first among all WHL defencemen in the preseason, third most among rookies and tied for 11th in overall scoring.

Dumba Rolling
Pats overage goaltender Kyle Dumba is doing all he can to earn a roster spot for the 2018-19 season. The Calgary product worked in both of the Pats wins over Brandon on the weekend, stopping all 31 shots he faced. On Friday, Dumba made 21 saves on 21 shots to earn a 3-2 overtime win in Brandon, then followed it up with a 10 save performance on Saturday in a 4-3 shootout win. Dumba is one of six 20-year-olds still on the Pats roster.