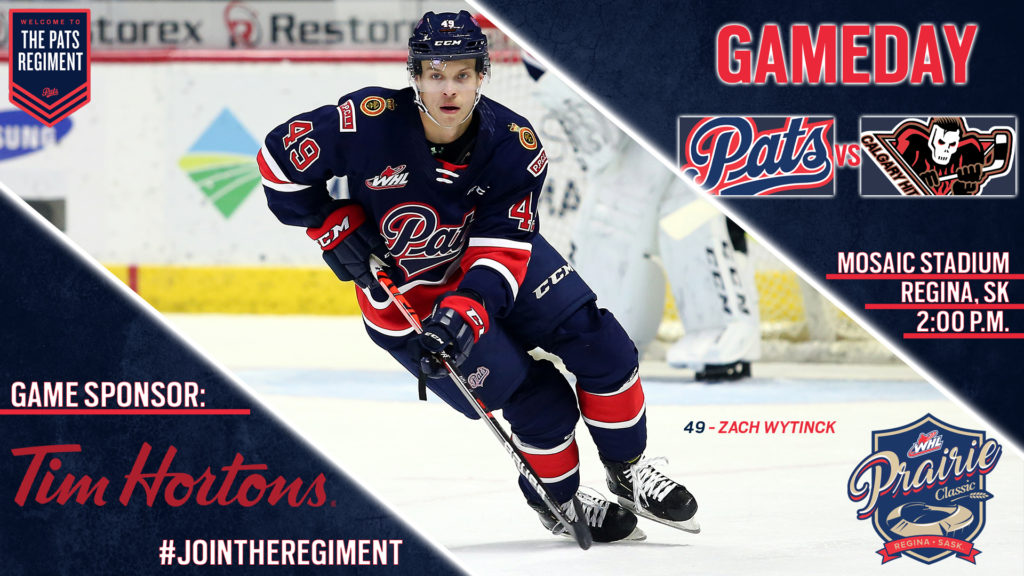 The Regina Pats (2-10-0-0) will host the 2019 Prairie Classic, outdoors on Sunday afternoon against the Calgary Hitmen (7-2-1-0). Puck drop is at 2:00 p.m. at the home of the Saskatchewan Roughriders, Mosaic Stadium. The Pats were last in action on Saturday in Red Deer where they snapped their 10-game losing streak with a 6-5 shootout win over the Rebels. The Hitmen were in Moose Jaw Friday picked up a 4-2 victory. Today is the first of four meetings between Regina and Calgary in 2019-20. The game can be heard with Bennett Dunlop Ford Pats Hockey starting at 1:35 p.m. on 620 CKRM.

Quick Facts
-The Pats will host their first ever outdoor game in Regina. The Pats played outdoors in Calgary in 2011, beating the Hitmen 3-2.
-Regina was 2-2-0-0 against the Hitmen in the 2018-19 season.
-The Pats snapped their 10-game losing streak with a 6-5 shootout win in Red Deer Saturday.
-Zach Wytinck put up a career high four points Saturday and scored the shootout winner. He was named to the Vaughn CHL team of the Week for his one goal and four assist weekend in Alberta.
-Danton Belluk made 24 saves in Red Deer and picked up his first career WHL win.
-Logan Nijhoff played in his 100th WHL game on Saturday and picked up an assist.
-Austin Pratt recorded his fourth multi-point game of the season against the Rebels Saturday.
-Regina has five powerplay goals in their last three games.
– Jake Johnson picked up the first two points of his WHL career on Saturday with two assists.

Wytinck Rolling
Pats overage defenceman Zach Wytinck put up a career high four points on Saturday in Red Deer and added a shootout winner. Wytinck has enjoyed a good offensive stretch in four games since being traded to Regina by the Brandon Wheat Kings. He has put up a goal and six assists in four games with the club, all of those points coming in the last three contests.

Roster Moves
The Pats have added two new faces to their lineup ahead of the Prairie Classic. On Monday, the club acquired 19-year-old goaltender Donovan Buskey from the Prince Albert Raiders in exchange for 18-year-old goalie Matthew Pesenti. On Wednesday, the Pats signed 18-year-old forward Zack Smith, he was with the Melfort Mustangs to start the year where he had 14 points in 15 games. Finally, the Pats traded forward Blake Allan to Calgary on Tuesday for an 8th round pick.

Last Pats Game
The Regina Pats put an end to their 10-game losing streak with a 6-5 shootout victory in Red Deer over the Rebels on Saturday night. In the first, the Rebels took a 1-0 lead just 36 seconds in. They added another at 12:32 of the opening period and led 2-0 at the break. In the second, the Pats cut the lead in half on the powerplay, Ty Kolle picked up his fifth to make it a 2-1 game. Red Deer responded with two quick goals to lead 4-1. The Pats didn’t go away however, first Austin Pratt tipped in his fifth and then Robbie Holmes ripped home his fourth from the slot and the Pats trailed 4-3 after forty minutes. In the third, the Pats tied it up 1:16 into the period. Ryker Evans finished off a feed from Carter Massier for his second and it was 4-4. It stayed that way until late when the Rebels got a go-ahead goal on the powerplay with 2:47 left in regulation. The Pats pulled Danton Belluk late and found a tying goal with 15 seconds left. Austin Pratt scored his second of the night and sixth of the season to force overtime. The extra frame solved nothing, and in the shootout, Ty Kolle, Austin Pratt and Zach Wytinck all scored and the Pats snapped their 10-game losing streak, 6-5 the final score.

Last Pats Game Vs Calgary
February 22, 2019 – Austin Pratt and Carter Massier each had a goal and an assist and Logan Nijhoff scored the winner in a 5-4 overtime victory for the Pats at the Brandt Centre. Mark Kastelic led the Hitmen with a goal and two assists, while James Malm and Kaden Elder each had two points. Dean McNabb stopped 37 of 41 shots for Regina, Jack McNaughton made 25 saves for Calgary.