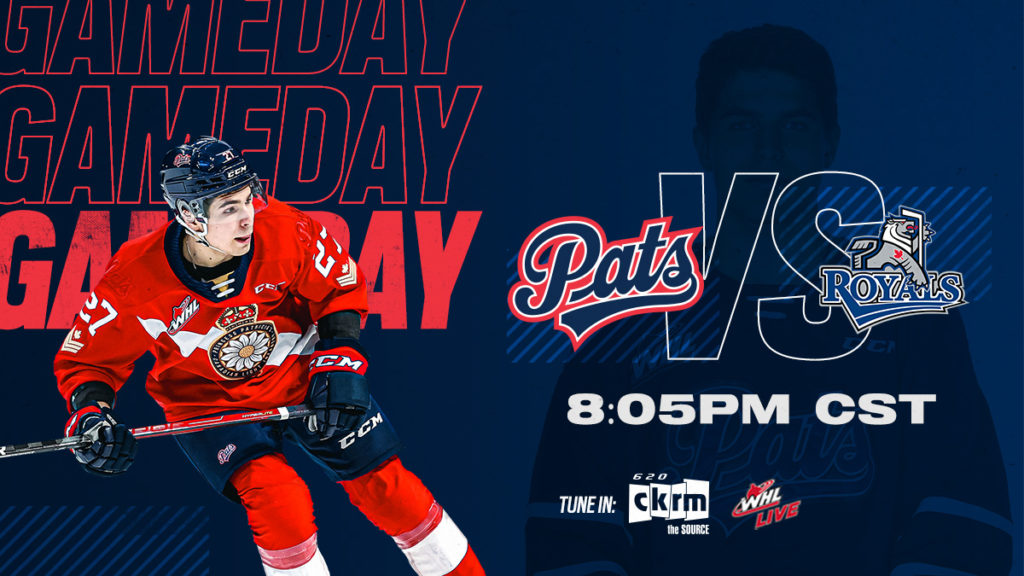 The Pats are coming off a 3-0 win over the Vancouver Giants on Friday in Langley, snapping the teams three game skid. Borya Valis (1G-1A), Tanner Howe and Sam Oremba scored in the victory, while Drew Sim made 47 saves for his third shutout of his WHL career. The final shots were 47-35 for the Giants. Regina went 1-2 on the power play and 5-5 on the penalty kill.

Meanwhile, the Victoria Royals are coming off a a 5-2 loss to the Prince George Cougars on Saturday for their seventh straight loss. The Royals last win came on October 29 when they defeated the Medicine Hat Tigers 4-3 in overtime. The Royals are currently 3-16-3-0 with just nine points, sitting in last in the WHL standings coming in.

It’s the Pats first matchup against the Royals since January 31, 2020 when Regina defeated Victoria 5-4 in a shootout at the Brandt Centre. The last time the Pats were in Victoria to play the Royals was November 17, with Victoria winning 2-1 in regulation. The Royals joined the Western Hockey League in 2011, and the Pats are 5-4-0-0 all-time against Victoria, going 4-1 at home and 1-3 on the road. The Pats only franchise victory in Victoria was November 17, 2012 with the Pats winning 3-2 in regulation.

49: Number of points (19G-30A) in 23 games for Pats captain Connor Bedard leads the WHL, while his 19 goals are first, and his 30 assists are also first…the North Vancouver, BC product also leads the WHL in power play assists (15) and power play points (20).

30.8: Shooting percentage for Alexander Suzdalev this season is first in the WHL (12-for-39)…the Washington Capitals 2021 third-round pick has points in nine straight (6G-11A-17PTS)…his eight power play goals are tied for second in the WHL.

8: Points over Tanner Howe’s last five games (4G-4A), as he has points in four of his last five games coming into action today…the Prince Albert, Sask. product has 27 points (11G-16A) in 22 games this season which is tied for 17th in WHL scoring.

16: Power play goals for the Regina Pats over their last 11 contests, having scored at least one power play marker in 11 straight…during that time, the Pats man-advantage has gone 16-for-50, running at 32.0%…overall, the Pats power play is 10th in the WHL at 23.7%.

7: Goals for Borya Valis over his last eight contests, as he has scored in five of his last eight games with seven goals and four assists for 11 points during that time…on November 9 vs. Edmonton, the Denver, Colorado product recorded a career-high four points, as well as his first career hat-trick.