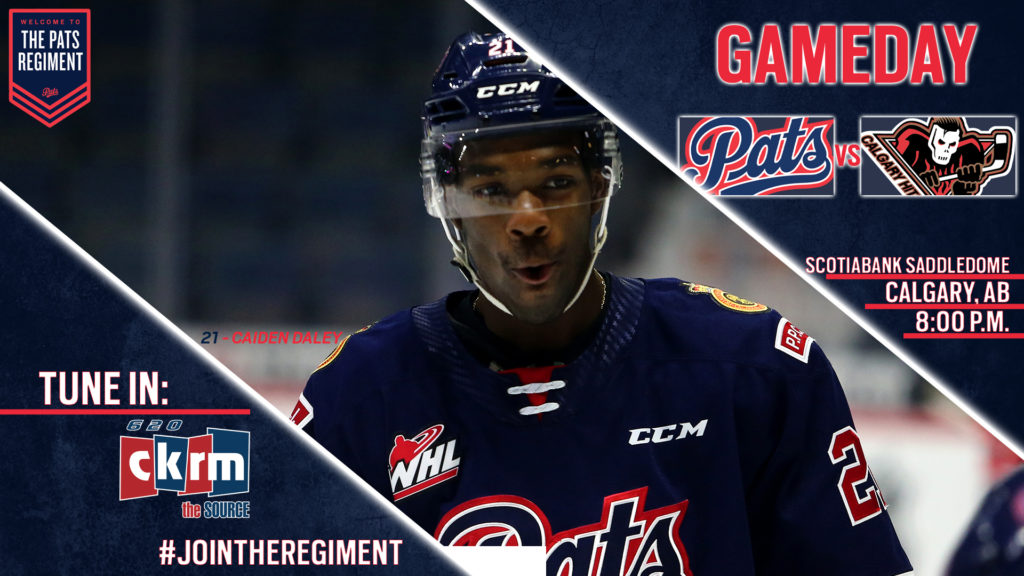 The Regina Pats (5-15-2-0) start a three games in three days weekend tonight when they visit the Calgary Hitmen (13-6-2-1). Puck drop is at 8:00 p.m. Regina time at the Scotiabank Saddledome. The Pats saw their two-game win streak come to an end on Wednesday in Lethbridge, falling 4-1 to the Hurricanes. The Hitmen were last in action on Saturday in Moose Jaw, picking up a 4-1 victory. Tonight is the third of four meetings between Regina and Calgary, the Pats are 0-1-1-0 in the season series. The game can be heard with Bennett Dunlop Ford Pats Hockey starting at 7:35 p.m. on 620 CKRM

Quick Facts
– The Pats will meet the Hitmen for the third time this season, Calgary won the first two games in Regina, once in overtime and once in regulation.
– The Pats are 4-5-2-0 in their last 11 games.
– Max Paddock played in his 100th WHL game on Wednesday, making 38 saves in Lethbridge.
– Zack Smith scored his fourth goal of the year in his 10th career game on Wednesday.
– Carter Chorney has two goals and six points in six games with the Pats since being acquired from Swift Current.
– Ryker Evans has assists in back to back games to reach six points for the season.
– Austin Pratt is third in the Western Hockey League with 110 shots on goal.
– The Regina powerplay is six for 15 in their last three games.

Century Mark
Pats goaltender Max Paddock played in his 100th regular season game on Wednesday night in Lethbridge. The 19-year-old made 21 saves in the first, nine in the second and eight more in the third period, giving up three goals. Paddock has gone 37-45-4-3 in his 100 games, posting a 3.30 goals against average, a .898 save percentage and three shutouts. He has played in 5478 minutes and made 2662 saves in his career.

Chorney Keeps Rolling
Pats 18-year-old forward Carter Chorney continues to impress early in his career with Regina. The Sherwood Park, Alberta product picked up an assist on Wednesday and has put up two goals and four assists for six points in six games since being acquired from the Swift Current Broncos. Conversely, Chorney had one goal and five points in 17 games in Swift Current. He has 14 shots on goal and is a plus two in his Pats career, scoring once on the powerplay and has a powerplay assist.

Last Pats Game
The Regina Pats got 38 saves from Max Paddock but fell 4-1 in Lethbridge to the Hurricanes on Wednesday night. In the first, the Hurricanes outshot the Pats 21-4, but Max Paddock stopped them all and it was scoreless going to the second. Halfway through the middle frame, the Hurricanes opened the scoring off the stick of Dino Kambeitz and it was 1-0. The Pats outshot Lethbridge 13-11 in the period, but trailed 1-0 after 40 minutes. In the third, Kambeitz picked up his second of the night to make it 2-0. The Pats got one back on a five on three powerplay, Zack Smith tipped in his fourth, and it was 2-1. The Canes responded with a goal from Dylan Cozens and then added an empty netter from Oliver Okuliar to take the two points in a 4-1 final. The Pats were outshot 42-26, the powerplay was one for five, the penalty kill went four for four, while Max Paddock made 38 saves in his 100th career game.

Last Pats Game Vs Calgary
November 20, 2019 – The Pats led 1-0 and 2-1 on home ice but Mark Kastelic put up two goals and two assists as the Hitmen skated to a 4-2 victory at the Brandt Centre. Ty Kolle led the Pats with a goal and an assist and Max Paddock made 32 saves. Jack McNaughton stopped 31 of 33 for the Hitmen.