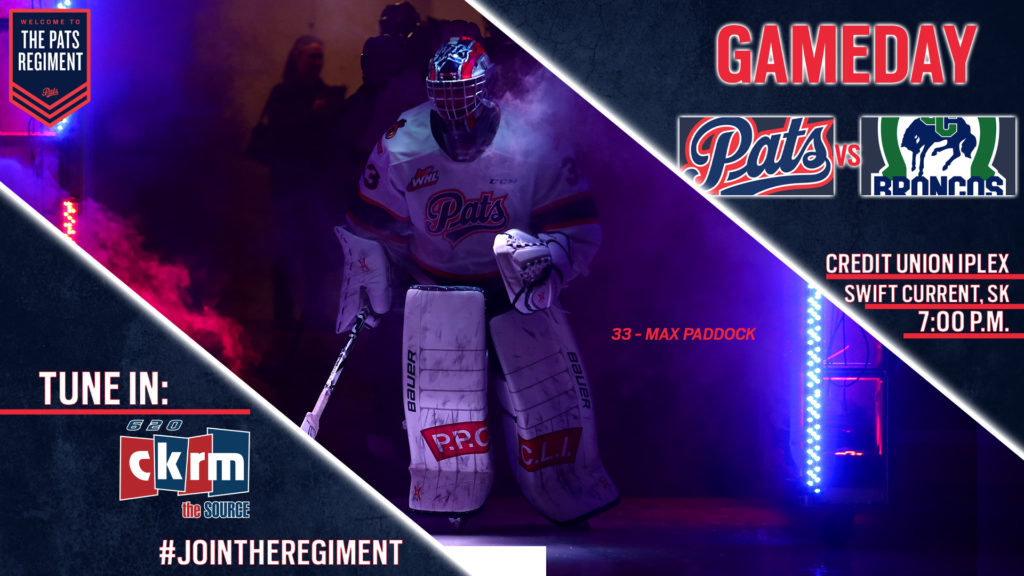 The Regina Pats (11-19-3-1) start a three in three weekend on Friday night when they visit the Swift Current Broncos (7-24-1-2). Puck drop is at 7:00 p.m. at Innovation Credit Union Iplex. The Pats were last in action on Wednesday when they beat the Prince Albert Raiders 2-1 in overtime at the Brandt Centre. The Broncos are coming off a 3-1 loss at home to the Lethbridge Hurricanes. Tonight is the third of six meetings between Regina and Swift Current this year, the Pats are 1-1-0-0 so far in the season series. The game can be heard with Bennett Dunlop Ford Pats Hockey starting at 6:35 p.m. on 620 CKRM the game will also be broadcast on Access 7.

Quick Facts
– The Pats will meet the Broncos for the third time on Friday, the road team has won the first two meetings.
– Robbie Holmes recorded his first career hat trick on November 22 in Swift Current.
– The Pats are 8-5-1-1 in their last 15 games and 4-1-0-1 in their last six.
– The Pats penalty kill has gone 22 for 22 in four games since the Christmas Break to reach 8th in the WHL at 81.9%.
– Max Paddock is 7-4-1-1 in his last 13 games, with a 2.45 GAA and a .934 save percentage and two shutouts.
– Austin Pratt is tied for fourth in the WHL with 151 shots on goal.
– Riley Krane played in his 100th WHL game on Wednesday night against Prince Albert, scoring a goal and an assist.
– Robbie Holmes took sole possession of the team lead in goals with his 15th on Wednesday.

Century Mark
Pats forward Riley Krane played in his 100th career WHL game on Wednesday night against the Raiders. The 18-year-old put up a goal and an assist in the game, to reach nine goals and 17 points in 32 games for the season. Krane, from Dawson Creek, B.C. has put up 22 goals and 42 points so far in his WHL career, three of those goals coming against the Broncos.

Holmes Keeps Rolling
Pats overage forward Robbie Holmes is enjoying the best offensive stretch of his WHL career. The product of Sherwood Park, Alberta has scored 10 times and added six assists for 16 points in his last 15 games, leading the Pats to an 8-5-1-1 record in that stretch. Holmes is up to 15 goals and 26 points, one off his career high in goals with 16 and three points from his career high of 29 points.

Last Pats Game
Robbie Holmes scored his 15th of the season, 13 seconds into overtime, as the Pats kicked off 2020 with a 2-1 win over the Prince Albert Raiders on Wednesday at the Brandt Centre. In the first, the two clubs had five combined powerplays, but it was a scoreless game after one. In the second, the Pats found the first goal of the contest at 16:38. Riley Krane finished his ninth on a pretty move in front. The Raiders tied it 1:52 later and it was 1-1 after 40 minutes. In the third, the Raiders outshot the Pats 13-2, but Max Paddock stopped them all, forcing overtime in a 1-1 game. In the extra frame, the Pats got the winner 13 seconds in, Robbie Holmes took a great feed from Riley Krane and potted his 15th on the backhand to give the Pats the two points in a 2-1 final.

Last Pats Game Vs Swift Current
November 22, 2019 – Robbie Holmes recorded his first career hattrick and Max Paddock made 25 saves for the shutout as the Pats won 6-0 in Swift Current. Regina outshot the Broncos 55-25 in the victory, Tyson Feist, Drew Englot and Carson Denomie each had two-point nights for the Pats.