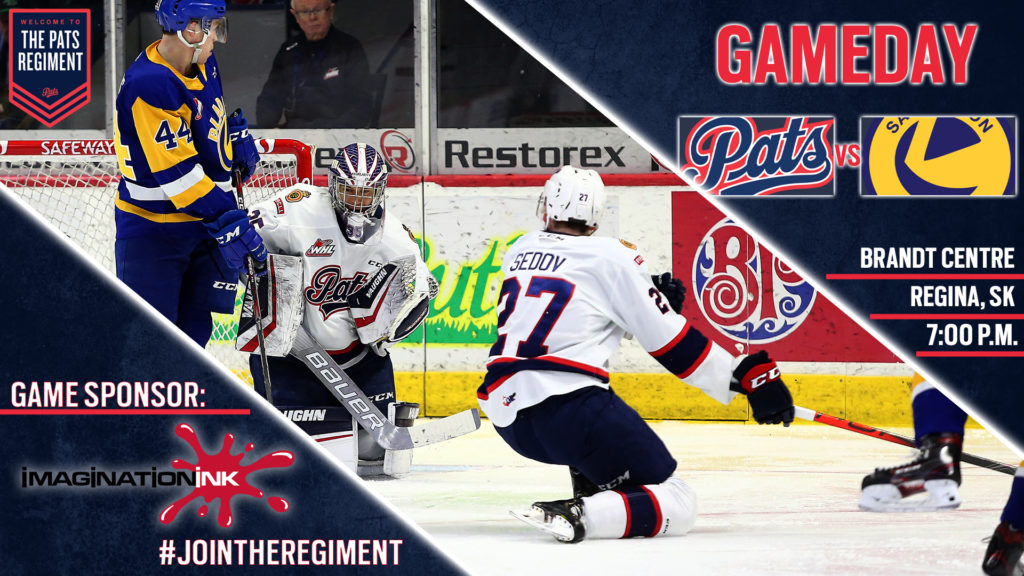 The Regina Pats (19-30-3-2) start a three games in three days weekend on Friday night when they host the Saskatoon Blades (28-22-2-3). Puck drop is at 7:00 p.m. at the Brandt Centre. The Pats were last in action on Tuesday night when they dropped a 5-2 decision in Prince Albert to the Raiders. The Blades last game was on Saturday when they picked up a 6-4 victory in Swift Current over the Broncos. Tonight is the third of six meetings meeting between Regina and Saskatoon, the Pats are 2-0-0-0 so far in the season series. The game can be heard with Bennett Dunlop Ford Pats Hockey starting at 6:35 p.m. on 620 CKRM and will be broadcast on Access 7.

Quick Facts
– The Pats have beat the Blades twice in a row and are 4-4-1-1 in their last 10 meetings with Saskatoon.
– Regina is 8-3-2 in their last 13 home games.
– Austin Pratt leads the Pats with eight career points in 19 games against Saskatoon.
– Donovan Buskey is 6-3-0-0 in his last nine starts, giving up three or less goals in seven of those games.
– Buskey is 5-0-0-0 in his career against Saskatoon, giving up just 12 goals.
– Riley Krane scored the second shorthanded goal of his WHL career on Tuesday in Prince Albert.
– Kyle Walker scored his fifth goal of the season on Tuesday, snapping a 12-game goalless streak.
– Steven Zonneveld recorded his first point of the season on Tuesday, his 18th game of the year.

Buskey’s Good Stretch
Pats goaltender Donovan Buskey is enjoying his best stretch of the season over his last nine starts. The 19-year-old has gone 6-3-0-0 since January 26, posting a .900 save percentage and a 3.02 goals against average. In seven of those nine games, the product of Vancouver B.C. has given up three goals or less. His 3.02 GAA is 10th best among all WHL starters since January 26. Since Buskey was named the starter after the 2020 WHL trade deadline, he has gone 7-7-0-0 in his 14 starts. He has gone 5-0-0-0 against Saskatoon in his career and is 2-0-0-0 against the Blades this season.

On the Board
Pats defenceman Steven Zonneveld picked up his first point of the season on Tuesday in Prince Albert. The 18-year-old joined the Pats full time on January 12 and has played in 18 games this season. The product of Calgary, Alberta played in 42 games with Regina last season, posting a goal and six assists. He has eight points in 60 career games

Last Pats Game
The Regina Pats fell 5-2 in Prince Albert on Tuesday night to conclude their season series with the Raiders at the Art Hauser Centre. In the first, the Raiders opened the scoring at 12:38 when Aliaksei Protas put home a rebound to make it 1-0. Protas added another on the powerplay late in the period and it was 2-0 Prince Albert after 20 minutes. In the second, Regina cut the lead in half when Riley Krane blocked a shot on the penalty kill and skated away on a breakaway, scoring his 16th of the season at 3:37 to make it 2-1. Prince Albert restored the two-goal lead at 15:17 on the powerplay and it was 3-1 after two. In the third, the Raiders got a goal from Ilya Usau to go up 4-1 six minutes in. The Pats got one back when Kyle Walker scored on his own rebound for his fifth at 8:22 and it was 4-2. Regina pulled Buskey for the extra attacker late, but the Raiders scored into the empty net and took the two points in a 5-2 final.

Last Pats Game Vs Saskatoon
February 5, 2020 – Riley Krane and Drew Englot scored in regulation, while Zack Smith scored the winner in the shootout as the Pats picked up a 3-2 win in Saskatoon over the Blades. Saskatoon got goals from Martin Fasko-Rudas and Jayden Wiens in the loss. Donovan Buskey stopped 23 of 25 for the Pats, Nolan Maier 23 of 25 for Saskatoon.