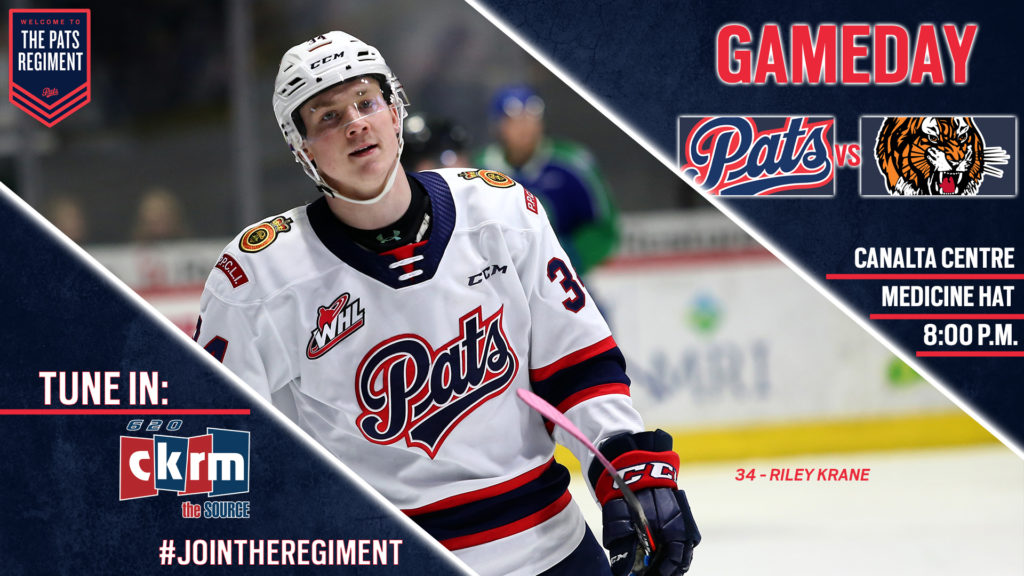 The Regina Pats (18-26-3-2) kick off a three-game road trip through the Central Division on Tuesday when they visit the Medicine Hat Tigers (33-16-2-1). Puck drop is at 8:00 p.m. Regina time at Canalta Centre. The Pats won a fifth consecutive game on Saturday when they beat the Swift Current Broncos 6-2 at the Brandt Centre. The Tigers last game was on Saturday when they lost 4-1 in Winnipeg to the ICE. Tonight is the second of four meetings between Regina and Medicine Hat, the Pats are 0-1-0-0 so far in the season series. The game can be heard with Bennett Dunlop Ford Pats Hockey starting at 7:35 p.m. on 620 CKRM.

Quick Facts
– The Pats are 3-7-0-0 in their last 10 meetings with the Tigers, Medicine Hat has won five in a row against Regina.
– The Pats are riding a season high five game win streak entering Tuesday night.
– Austin Pratt leads the Pats with 11 career points against the Tigers in 19 games.
– Robbie Holmes set a new career high for points in a game with four on Saturday against Swift Current.
– Carson Denomie became the first Pat to reach the 20-goal mark for the season on Saturday.
– Donovan Buskey is 5-0-0-0 in his last five starts with a 2.49 GAA and a .904 save percentage.
– The Pats are 10-8-0-1 in their 19 games since the Christmas break.

Career Night
Pats forward Robbie Holmes set a new career high for points in a single game on Saturday with a goal and three assists for a four-point effort. The 20-year-old factored in on the first four Regina goals, scoring the first shorthanded goal of his career in the second, which stood up as the game winner. Holmes is enjoying a career season with 19 goals and 23 assists for 42 points in 48 games. His previous high was 16 goals and 23 points for a season. Holmes is currently one point back of Austin Pratt for the team lead in scoring.

Last Pats Game
Robbie Holmes put up a career high four points to lead the Pats to a fifth straight win, 6-2 over the Swift Current Broncos on Saturday night at the Brandt Centre. In the first, the Pats opened the scoring at the 3:38 mark. Riley Krane jammed in his 14th to make it 1-0. The Broncos tied it with a powerplay goal at 11:37, but the Pats responded with a powerplay goal of their own. Drew Englot tipped in his 11th on a shot from Robbie Holmes and Regina led 2-1 after one. In the second, the Broncos tied it at two on a goal from Matthew Benson. Regina took the lead back with a shorthanded goal from Robbie Holmes, his 19th of the season, and it was 3-2. Ryker Evans extended the lead to 4-2 in the final minute of the second with his fifth and the Pats led by two at the break. In the third, Zack Smith potted his 10th on a back hand shot from the left circle to make it 5-2. Carson Denomie rounded out the scoring with his 20th at 13:09 to make it 6-2 and that was the final score.

Last Pats Game Vs Medicine Hat
October 4, 2020 – Carter Massier and Ty Kolle provided the goals in the Pats 6-2 loss at home to Medicine Hat. The game was tied at two in the second, but the Tigers would score four unanswered in the win. Cole Sillinger and Ryan Chyzowski led the way with three-point games for Medicine Hat.