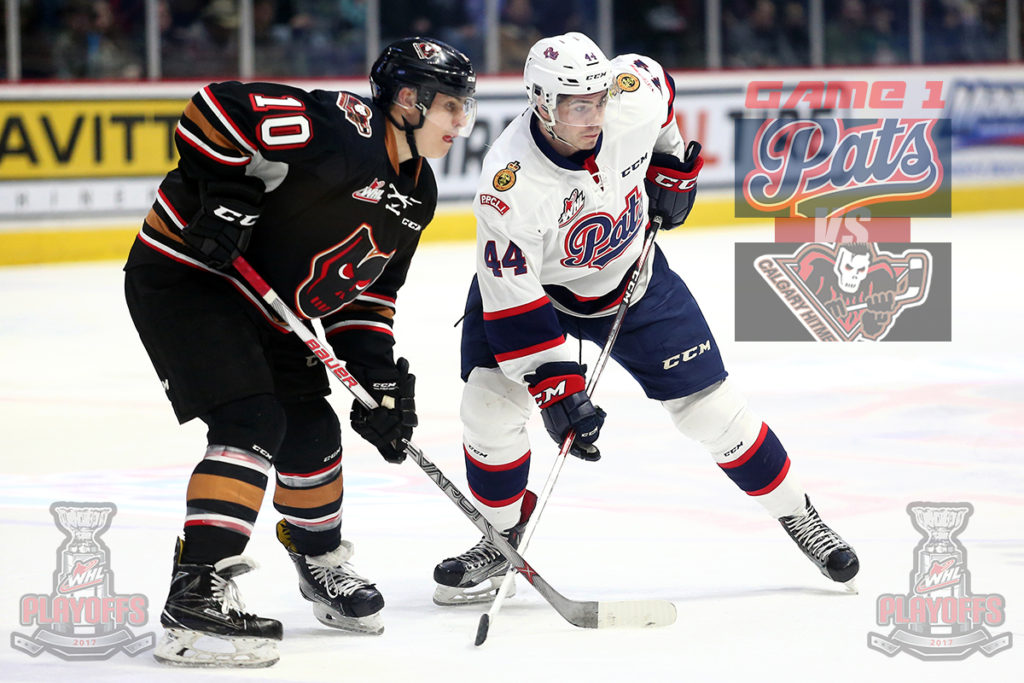 The Regina Pats (52-12-7-1) kick off the 2017 WHL Playoffs tonight, at home to the Calgary Hitmen (30-32-8-2). Puck drop is 7 p.m. at the Brandt Centre. The Pats wrapped up the regular season on Saturday in Brandon with an eighth straight win, 6-0 over the Wheat Kings. The Hitmen won their last two games of the regular season against the Kootenay ICE. The Pats went 3-1-0-0 against Calgary during their regular season series. The game can be heard on 620 CKRM with Bennett Dunlop Ford Pats Hockey beginning at 6:35 p.m. The game will also be broadcast on Access 7.

Lead Up: Pats Win 8th in a Row Saturday
The Regina Pats closed the 2016-17 season with a 6-0 win in Brandon over the Wheat Kings on Saturday night. The Pats got a 34 save shutout from Jordan Hollett while Adam Brooks led the offence with a goal and two assists. The Pats led 1-0 after 1, 4-0 after two and 6-0 at the end of the contest. Regina finishes the year on an eight game winning streak and a 52-12-7-1 record. Regina outshot the Wheat Kings 44-34 in the win, the powerplay was oh for one and the penalty kill seven for seven.

Head to Head
The Pats went 3-1-0-0 against Calgary in their four game regular season series. The Pats scored 19 goals in the four games to the Hitmen’s 13. Regina was six for 17 on the powerplay and the penalty kill 17 for 20. The Pats outshot the Hitmen 138-125 in the four games. Sam Steel scored seven goals and added five assists against Calgary. Connor Hobbs recorded eight points, Adam Brooks seven and Nick Henry and Dawson Leedhal each had six. Goaltender Tyler Brown was 2-0-0-0 with a 0.99 G.A.A., a .965 save percentage and one shutout. The Hitmen were led by Jake Bean, Matteo Gennaro and Luke Coleman who put up five points against the Pats. Three others had three points in the four meetings.

Franchise Record
Pats defenceman and Washington Capitals prospect Connor Hobbs set a franchise record for goals in a season by a defenceman in the final game of the regular season. Hobbs recorded his 31st goal of the campaign in the club’s 6-0 win over Brandon on Saturday. The previous record of 30 goals was held by John Miner from the 1984-85 season. Hobbs led all WHL defenceman in goals (31) and points (85).