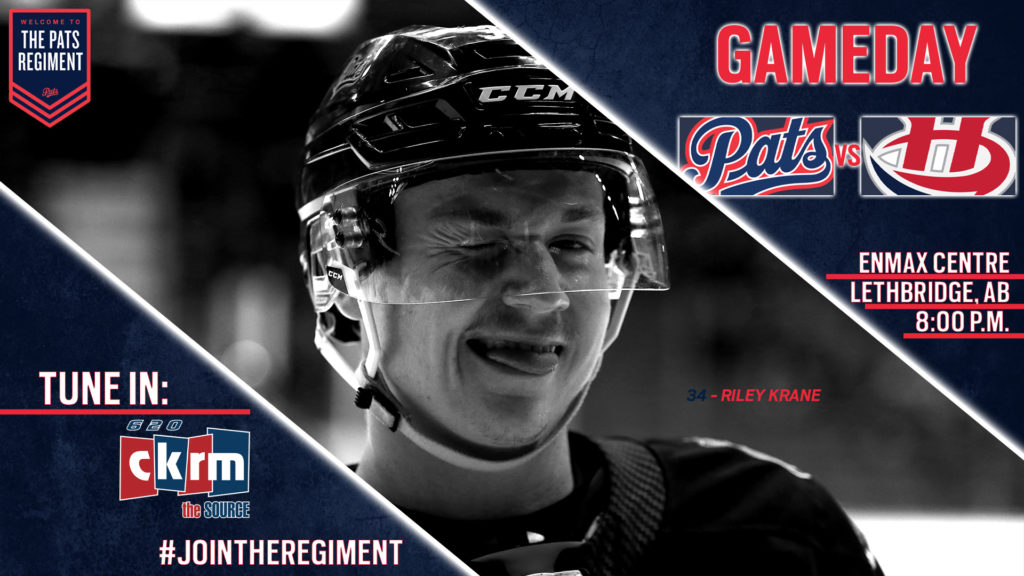 The Regina Pats (5-14-2-0) kick off a four-game road trip through the Central Division on Wednesday night when they visit the Lethbridge Hurricanes (16-7-0-3). Puck drop is at 8:00 p.m. Regina time at the Enmax Centre. The Pats won back to back games for the first time on the weekend, beating Swift Current and Brandon on the road. The Hurricanes were in Red Deer on Saturday and beat the Rebels 11-2.  Tonight is the third of four meetings between Regina and Lethbridge, the Pats are 0-2-0-0 in the season series. The game can be heard with Bennett Dunlop Ford Pats Hockey starting at 7:35 p.m. on 620 CKRM.

Quick Facts
– The Pats will meet the Hurricanes for the third time this season, Regina has dropped two, one-goal games so far in the season series.
– The Pats are 4-4-2-0 in their last 10 games and have won back to back contests for the first time this season.
– Robbie Holmes has four goals and an assist in his last two games.
– Carson Denomie scored his first goal with the Pats on Saturday in Brandon.
– Drew Englot has three assists in his last two contests.
– Nikita Sedov had no goals in his first 75 games in the WHL but has scored twice in the last nine contests.
– Max Paddock is one game away from 100 in his career with the Pats.
– The Regina powerplay is five for 10 in their last two games.

Denomie On the Board
Pats forward Carson Denomie scored his first goal in a Regina uniform on Saturday in Brandon. The 19-year-old also put up two assist in Swift Current on Friday and has three points in his first four games with the Pats. Denomie’s goal on Saturday came on the powerplay early in the third to reach six on the season, five of which have come on the man advantage. He is currently second on the Pats in scoring with 16 points in 23 games.

Last Pats Game
The Regina Pats picked up a second consecutive win, 5-4 in Brandon over the Wheat Kings on Saturday night. The Wheat Kings opened the scoring just over a minute in, Ben McCartney snapped one from the slot to make it 1-0. Brandon was awarded a penalty shot a short time later and Donovan Buskey made a sensational glove save to keep it a one goal game. The Pats responded when Riley Krane banged in his own rebound at the nine-minute mark to tie the game at one and that was the score after the first. In the second, Brandon went ahead 2-1 on a goal from Lynden McCallum at 8:59. The Pats powerplay tied the game thanks to Carter Chorney, his third and it was 2-2 after two period. In the third, Carson Denomie scored his sixth, 30 seconds in on the powerplay to give Regina the lead. Then Robbie Holmes potted his ninth and the Pats led by two. The Wheat Kings got one back, but Kyle Walker restored the two-goal advantage with his second, making it 5-3. Brandon battled to get one back in the last minute, but Regina held on for the 5-4 win.

Last Pats Game Vs Lethbridge
October 18, 2019 – The Pats outshot the Hurricanes 33-21 but only got one goal from Zach Wytinck in a 2-1 loss in Lethbridge. Carl Tetachuk led the way for the Canes with a 32 save performance, while Jett Jones and Calen Addison provided the goals. Danton Belluk made 19 saves for Regina in the defeat.