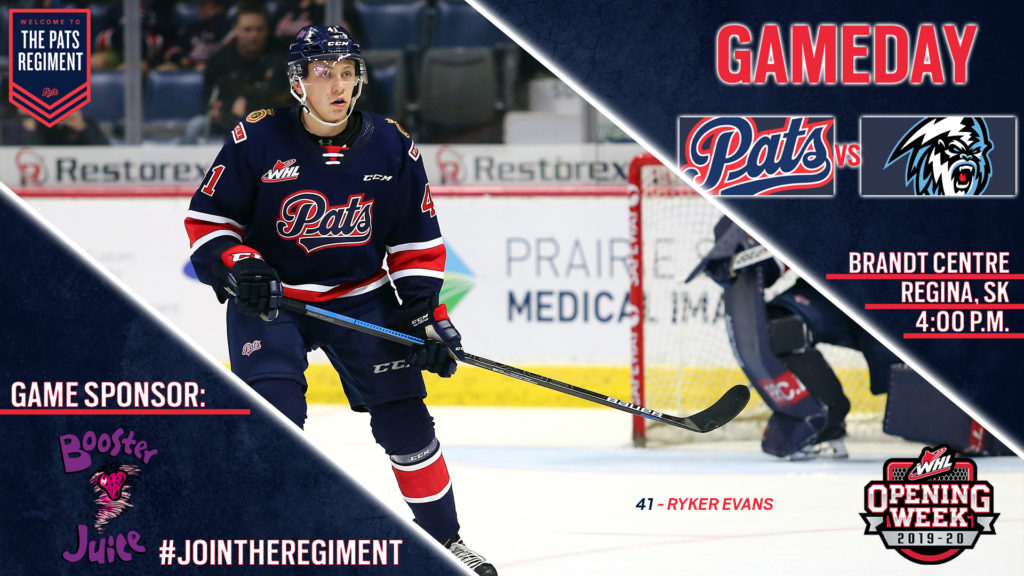 The Regina Pats (1-2-0-0) play the second of three straight on home ice on Sunday when they host the Winnipeg ICE (2-1-1-0). Puck drop is at 4:00 p.m. at the Brandt Centre. The Pats are coming off a 5-2 loss at home to the Prince Albert Raiders on Friday. The ICE are wrapping up a three games in three days stretch, they beat the Saskatoon Blades on Friday and lost 3-2 in overtime in Prince Albert on Saturday. Sunday will mark the first of six meetings between the Pats and ICE in 2019-20, Tonight’s game can be heard with Bennett Dunlop Ford Pats Hockey starting at 3:35 p.m. on 620 CKRM and will also be broadcast on Access 7.

Quick Facts
-Sunday is the first time the ICE will visit the Brandt Centre since their relocation to Winnipeg.
-The Pats are 1-1-0-0 on home ice this season.
-Regina went 2-2-0-0 against the ICE in 2018-19.
-Pats forward Blake Allan will play against his former team on Sunday, the ICE have three former Pats on their roster, goaltender Dean McNabb, forward Cole Muir and defenceman Marco Creta.
-Pats captain Austin Pratt has points in all three games to start the season. Scoring a goal and adding three assists.

Belluk’s Debut
With Max Paddock unavailable on Friday, newly acquired goaltender Danton Belluk made his Pats debut against Prince Albert. The 18-year-old made 24 saves on 28 shots against the defending champs and gave his team a chance. Paddock underwent a minor procedure early in the week and as a result 15-year-old Matthew Kieper was called up and backed up Belluk on Friday night. Belluk was acquired in a trade with the Everett Silvertips on September 16, 2019.

Pratt’s Hot Start
Pats overage captain Austin Pratt is off to a great start to his final junior season. The product of Lakeville, MN has points in all three games to start the year, scoring once and adding three assists. Pratt had two points on opening night and has an assist in each of the two games since. His four total points are tied for 26th in the early Western Hockey League Season, while his three assists are tied for 15th best. Pratt is coming off a career best season in 2018-19 where he had 26 goals and 51 points in 68 games.

Last Pats Game
The Prince Albert Raiders scored three times in the third to break a 2-2 tie and beat the Regina Pats 5-2 at the Brandt Centre on Friday. In the first, the Pats got a good bounce to open the scoring at 5:49. Riley Krane snapped a shot from the left-wing boards, and it went off a Raider and in for his second of the year. The Pats got the lead to 2-0 with three minutes left in the period when Austin Pratt centered, and Riley Krane made no mistake for his second of the night from the slot. In the second, the Raiders scored two, 26 seconds apart in the latter stages of the frame to tie it at two after forty minutes. In the third, Aliaksei Protas, Ozzy Weisblatt and Brayden Watts combined to score three times for Prince Albert, once into an empty net, and the Raiders took the two points in a 5-2 final score. The Pats were outshot 29-25, they did not have a powerplay and the penalty kill went two for three. Riley Krane led the offence with two goals, while Danton Belluk made 24 saves in his Pats debut.

Last Pats Game Vs Kootenay/Winnipeg
February 20, 2019 – The Regina Pats erased a 4-0 deficit with a late second period goal and three more in the third en-route to a 5-4 shootout victory over the Kootenay ICE at the Brandt Centre. Brady Pouteau and Liam Schioler each had two points in the comeback, while Logan Nijhoff scored the tying goal with three minutes left in regulation. Garrett Wright scored the shootout winner for Regina who got 31 combined saves from Max Paddock and Dean McNabb. Jesse Makaj made 21 saves for the ICE in the defeat.