PREVIEW: Pats right back at it Wednesday in Kelowna 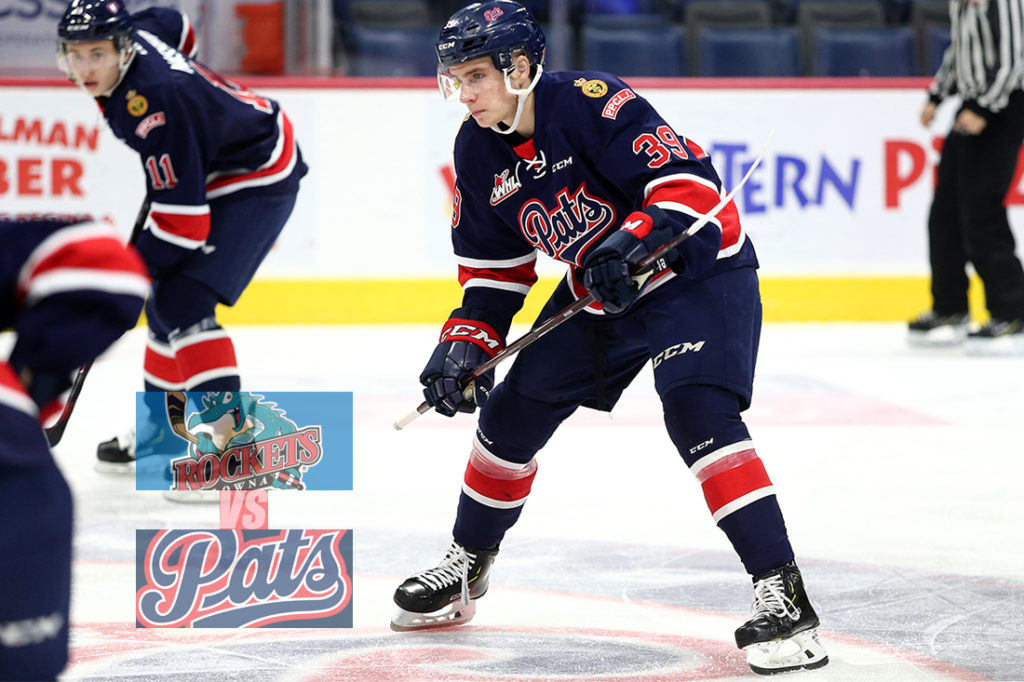 The Regina Pats (8-15-0-0) play their second game in as many nights on Wednesday on the road against the Kelowna Rockets (9-13-1-0). Puck drop is at 9:00 p.m. Regina time at Prospera Place. The Pats got 33 saves from Max Paddock on Tuesday night in a 3-2 win over the Kamloops Blazers. The Rockets were last in action on Saturday when they picked up a 3-1 win in Edmonton over the Oil Kings Tonight is the first and only meeting of the 2018-19 season between the Pats and Rockets, Regina is looking to snap a three-game losing streak against Kelowna, their last win coming on the road in the 2015-16 season. Tonight’s game can be heard with Bennett Dunlop Ford Pats Hockey starting at 8:35 p.m. on 620 CKRM.

The Lead Up: Paddock stops 33 in 3-2 win in Kamloops Tuesday
Max Paddock made 33 saves and the Regina Pats picked up their first win of their West coast road trip Tuesday, 3-2 in Kamloops over the Blazers. The Blazers opened the scoring at 3:46 of the first, Zane Franklin finished off a pretty pass from Orrin Centazzo and it was 1-0 after one. In the second, Marco Creta tied the game for the Pats with his second of the year at the 5:07 mark. It stayed 1-1 until late in the frame, when Jake Leschyshyn forced a turnover in the offensive zone and set up Nick Henry back door for his 12th and the Pats led 2-1 after two. In the third, Riley Krane jammed home a rebound for his third and the Pats led 3-1. Kamloops got one back with just over six minutes left, but Max Paddock shut the door from there and the Pats won 3-2. The Pats were outshot 35-31 in the win, the powerplay was oh for the three and the penalty kill went three for three. Nick Henry led the offence with a goal and an assist, while Max Paddock made 33 saves.

Streu Contributing
Forward Sebastian Streu is off to a good start in his Pats career. The 19-year-old has a goal and two assists in his first four games since joining the club. Streu scored in his first game, was kept off the scoresheet against Vancouver on Friday, but has picked up assists in both of the last two games. Streu played the 2017-18 season with the Kootenay ICE and was released and started 2018-19 in the BCHL with the Vernon Vipers. The Pats added him early last week and he has been kept off the score sheet just once in his first four games.

Krane A Win
Pats forward Riley Krane scored his third goal of the season on Tuesday night in Kamloops. The 18-year-old rookie has four goals in his career, in 23 games. Three of his four goals have come on the road, two of those being game winners, including last night’s tally against the Blazers. The Pats are 3-1-0-0 when Krane scores in a contest. The product of Dawson Creek, B.C. was drafted in the eighth round of the 2015 WHL Bantam Draft and has six points in 18 games so far this year.

Strong 10 for Creta
Pats defenceman Marco Creta has been putting up some good offensive numbers over his last 10 games. The 18-year-old has two goals and four assists for six points over that stretch, including the Pats first goal on Tuesday in Kamloops. A product of Oak Bluff, Manitoba, Creta had an assist in the Pats opening game but was kept pointless in the next seven games. His six points in 10 games since is the second most in that stretch by a Pats defenceman, behind Aaron Hyman who has 11 points in his last 10 games.