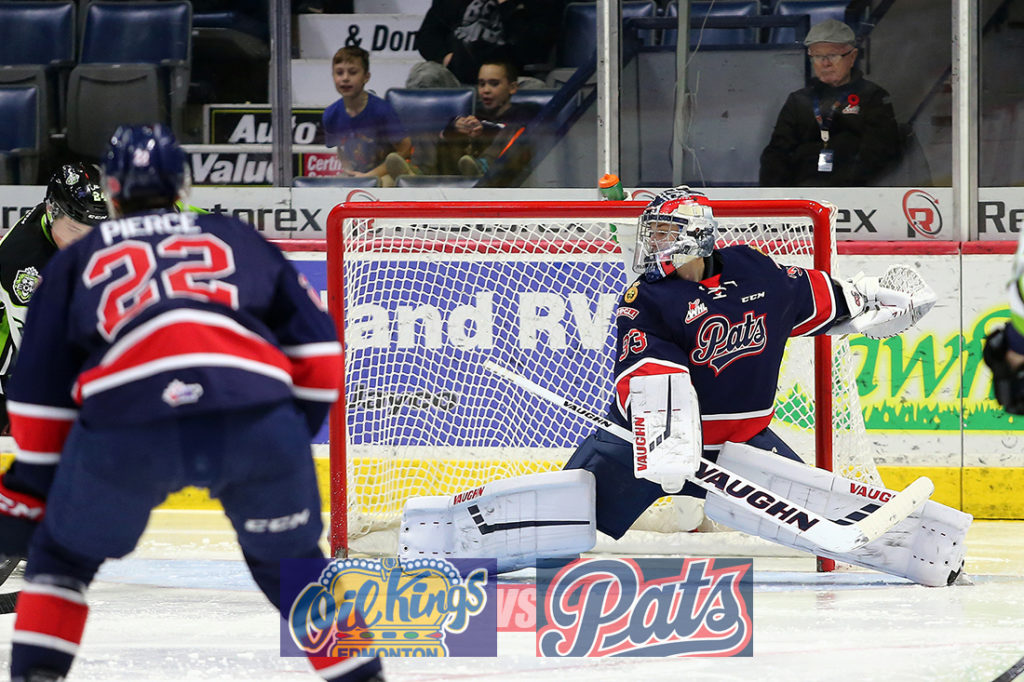 The Regina Pats (15-37-1-2) return home for the first time since February 1 on Friday when they host the Edmonton Oil Kings (31-17-4-4). Puck drop is at 7:00 p.m. at the Brandt Centre. The Pats were last in action on Sunday to wrap up their four-game road trip with 5-2 defeat at the hands of the Oil Kings in Edmonton. The Oil Kings were in Moose Jaw on Thursday night and picked up a 3-2 victory. Tonight is the fourth and final meeting between Regina and Edmonton in 2018-19, the Pats are 0-3-0-0 in the season series. Tonight’s game can be heard with Bennett Dunlop Ford Pats Hockey starting at 6:35 p.m. on 620 CKRM.

The Lead Up: Pats finish road trip with 5-2 loss in Edmonton Sunday
The Regina Pats finished their four-game road trip in the Central Division with a 5-2 loss to the Edmonton Oil Kings on Sunday. In the first, the Pats outshot the Oil Kings 17-11 and got the period’s lone goal. Austin Pratt dragged the puck in front and finished off his 20th of the year to make it 1-0, that was the score after 20 minutes. In the second, the Oil Kings scored three times in the first 6:25 of the frame to take a 3-1 lead, that was the score after two periods. In the third, Edmonton made it 4-1, four minutes into the frame on a goal from Andrew Fyten. Regina got it back to within two on the powerplay five minutes later. Logan Nijhoff got one to go from the left circle for his fifth and it was a 4-2 game. It stayed that way until late when the Oil Kings scored into an empty net to make it 5-2 and that was the final. The Pats were outshot 45-36, the powerplay was one for five, the penalty kill three for three and Max Paddock made 40 saves.

20 Goal Mark
Pats forward Austin Pratt reached the 20-goal plateau on Sunday in Edmonton. The 19-year-old gave the Pats a 1-0 lead late in the first period. Pratt is enjoying a career season with 20 goals and 21 assists for 41 points in 55 games. His previous career high was 16 goals and 34 points in 70 games in 2016-17 with the Red Deer Rebels. He has seven goals and 12 points since the Christmas break. Pratt leads Regina with 199 shots on goal and six powerplay assists.

Penalty Kill Success
The Pats are coming off the best five game stretch on the penalty kill this season. The club has killed 17 of their last 18 shorthanded situations in that stretch for a 94.4 per cent success rate. In 21 games in the second half of the season, the Pats have gone 77 for 95 on the penalty kill, for 78.6 per cent to go along with three shorthanded goals. Since the Christmas Break, the Pats penalty kill percentage has jumped from 71.1 percent up to 74.5 percent. Half of the clubs six shorthanded goals this year have come in the second half.

Evans Strong Road Trip
Pats rookie defenceman Ryker Evans put up some good numbers in the team’s four game road trip through the Central Division. The 17-year-old picked up an assist in Lethbridge last Tuesday, scored the overtime winner in Red Deer last Friday and added an assist on Sunday in Edmonton for three points in his last four games. A product of Calgary, Evans has played in five games since returning from a lower-body injury that kept him out of 23 games. He has a goal, two assists and is plus three in those five contests. For the season, he has put up a goal and six assists for seven points to go along with 24 penalty minutes and 23 shots on goal.