PREVIEW: Pats return to action Sunday at home to Lethbridge 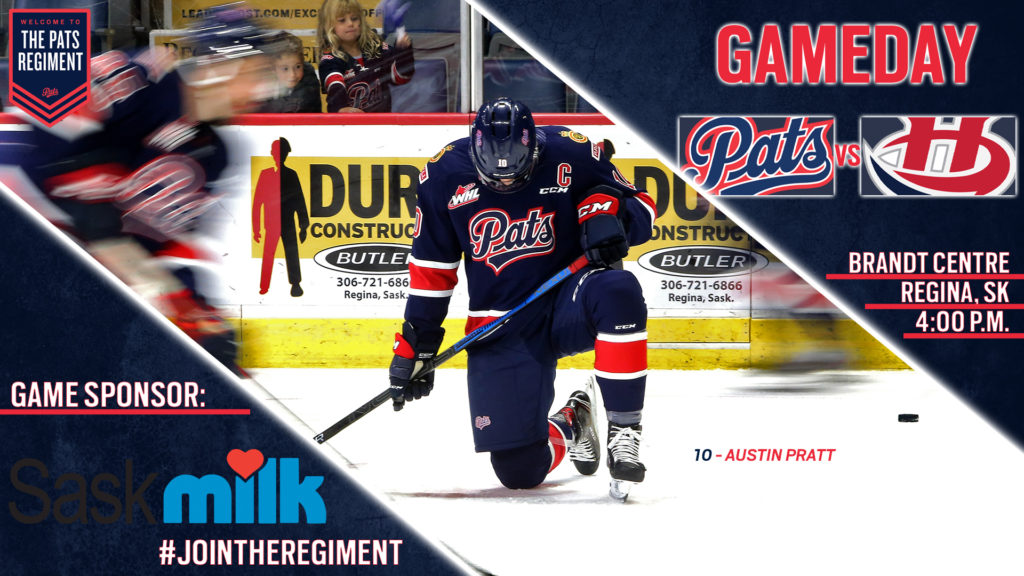 The Regina Pats (1-8-0-0) return to action on Sunday afternoon on home ice against the Lethbridge Hurricanes (3-4-0-1). Puck drop is at 4:00 p.m. at the Brandt Centre. The Pats were last in action on Saturday night when they dropped a hard fought 4-2 decision to the visiting Vancouver Giants. The Hurricanes were in Saskatoon on Saturday and fell 2-1 to the Blades. Sunday is the first of four meetings between Regina and Lethbridge in the 2019-20 season. Tonight’s game can be heard with Bennett Dunlop Ford Pats Hockey starting at 3:35 p.m. on 620 CKRM.

Quick Facts
-The Pats will host the first of two straight against Lethbridge Sunday, will visit the Hurricanes on Friday night in Lethbridge.
-Regina was 1-3-0-0 against the Hurricanes in 2019-20.
-Robbie Holmes has four goals and six points in seven career games against Lethbridge.
-The Pats are 1-5-0-0 on home ice this season.
-Cole Dubinsky and Ryker Evans both scored their first goals of the season on Saturday against Vancouver.
-Nikita Sedov returned from an upper-body injury on Saturday, had missed the previous five games.
-Garrett Wright picked up his fifth assist of the year on Saturday, tying Austin Pratt for the team lead in helpers this year.
-Kyle Walker has a goal and two assists in his last two games played.

Sedov Returns
The Pats got defenceman Nikita Sedov back from injury on Saturday. The 18-year-old reigning Charles Johnston Memorial Trophy winner as the Pats top defenceman in 2018-19 had missed the previous five games with an upper-body injury he suffered in the third game of the year. Sedov had two shots on goal in his return. In his rookie season last year, the product of Tyumen, Russia had 19 points to lead all Regina defencemen in scoring.

Evans Finding His Touch
Pats defenceman Ryker Evans scored his first goal of the season on Saturday night against Vancouver. The 18-year-old tied the game for Regina early in the second period. Evans has points in consecutive games entering Sunday after picking up an assist against Edmonton on Tuesday and a goal on Saturday. The product of Calgary, Alberta has 13 points, two of them goals, in 54 career games in the Western Hockey League. He is third on the team in defence scoring, behind Kyle Walker who has four points and Zach Wytinck who has three points on the year.

Last Pats Game
The Regina Pats battled hard in a 4-2 home loss to the Vancouver Giants on Saturday night at the Brandt Centre. In the first, the Pats put the game’s first shots on goal, but it was the Giants who opened the scoring at 3:27. Zach Ostapchuk picked up his first from the left circle and it was 1-0 after one, despite the Pats leading on the shot clock 15-5. In the second, the Pats found the tying goal five minutes in. Ryker Evans scored his first of the season from the left circle, assists to Logan Nijhoff and Riley Krane and it was 1-1. The Giants took the lead back at 18:34 thanks to Milos Roman and the Pats trailed 2-1 after two. In the third, the Giants went up 3-1 in the opening minute on a goal from Jackson Shepard. The Pats got back to within one when Garrett Wright set up Cole Dubinsky all alone in front and he scored his first to make it 3-2. Vancouver would seal the victory with just over two minutes left on a breakaway goal for Milos Roman to make it 4-2 and that was the final score. The Pats outshot the Giants 36-29, the powerplay was oh for six and the club did not take a penalty in the game. Cole Dubinsky and Ryker Evans provided the offence for Regina, while Danton Belluk made 25 saves.

Last Pats Game Vs Lethbridge
March 2, 2019 – Austin Pratt scored his 24th goal of the season in a 4-1 loss for the Regina Pats on home ice to the Hurricanes. Nick Henry and Jake Elmer had a goal and an assist for Lethbridge while Taylor Ross chipped in with two assists. Max Paddock made 34 saves on 38 shots for the Pats, while Carl Tetachuk stopped 38 of 39 for the Hurricanes.