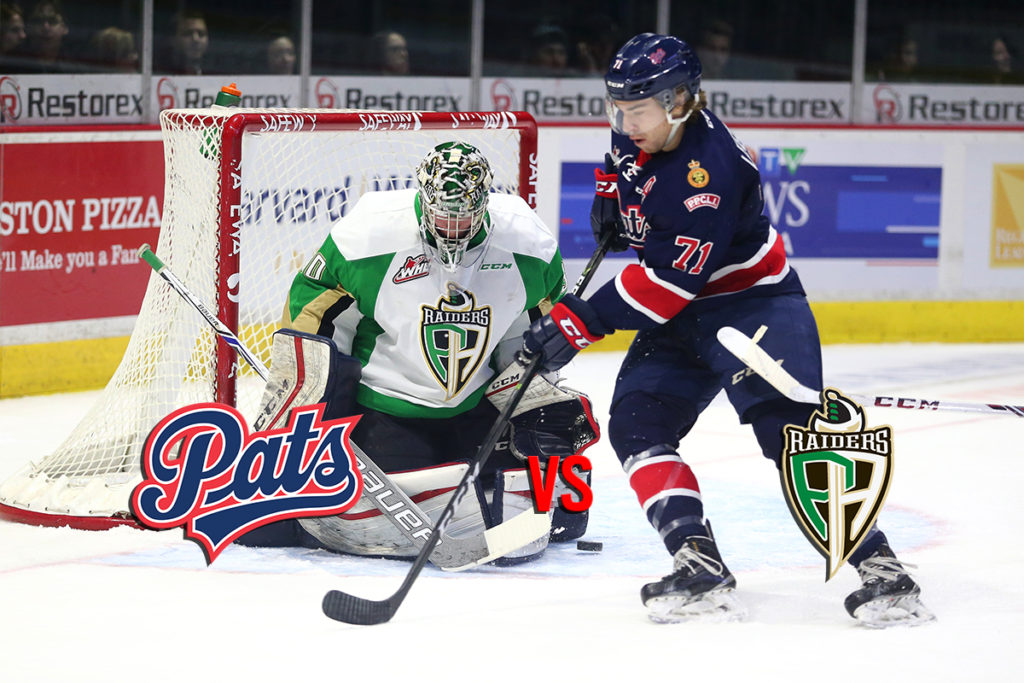 The Regina Pats (24-3-6-1) return to the Brandt Centre Sunday for the back half of a home and home with the Prince Albert Raiders (8-27-1-1). Puck drop is at 4 p.m. at the Brandt Centre. The Pats won big in Prince Albert on Friday night, 8-0 over the Raiders. Tonight is the fifth of eight meetings between the two clubs. The Pats are 3-0-1-0 in the season series so far. Tonight’s game can be heard on 620 CKRM with Bennett Dunlop Ford Pats Hockey beginning at 6:35 p.m.

Lead Up: Pats Rout Raiders Friday
The Regina Pats dominated their way to an 8-0 win in Prince Albert over the Raiders on Friday night. Liam Schioler got the scoring started with his first career goal in the opening period. The Pats went on to add another in the first, four more in the second and two in the third. Tyler Brown did the rest making 24 saves for his second shutout of the season. Sam Steel led the offense with a goal and two assists while Chase Harrison, Jonathan Smart, Nick Henry, Jake Leschyshyn, Austin Wager and Lane Zablocki each had two point outings. The win improved the Pats to 3-0-1-0 against the Raiders and brought their overall record to 24-3-6-1.

Head to Head
The Pats hold a 3-0-1-0 record against the Raiders so far this season. The Raiders won the first meeting of the year on opening night in overtime. The Pats have gone on to win three in a row in the season series. The Pats have outscored P.A. 25-7 in the four games and outshot them 169-100. The Pats have gone 6 for 15 on the powerplay and the penalty kill is 15 for 18 with two shorthanded goals. Sergey Zborovskiy and Jake Leschyshyn lead the Pats with seven points each against P.A. Four other Pats have five points. Goaltender Tyler Brown is 2-0-1-0 in the season series with a 1.97 GAA, a .914 save percentage and one shutout. The Raiders Simon Stransky has six points against the Pats this year.

Smart Rolling
Pats defenceman Jonathan Smart is on a tear since coming to Regina in a trade with the Kelowna Rockets. The 17-year-old has 10 assists and is plus 15 in 11 games in a Pats uniform. Smart had two assists and was a plus four against the Raiders on Friday night. In comparison, Smart had one goal, seven points and was plus nine in 24 games with the Rockets prior to the trade. He has more than doubled his point production since joining the Pats. Smart is a ‘C’ ranked skater as a potential fourth to sixth round selection in the 2017 NHL Entry Draft.