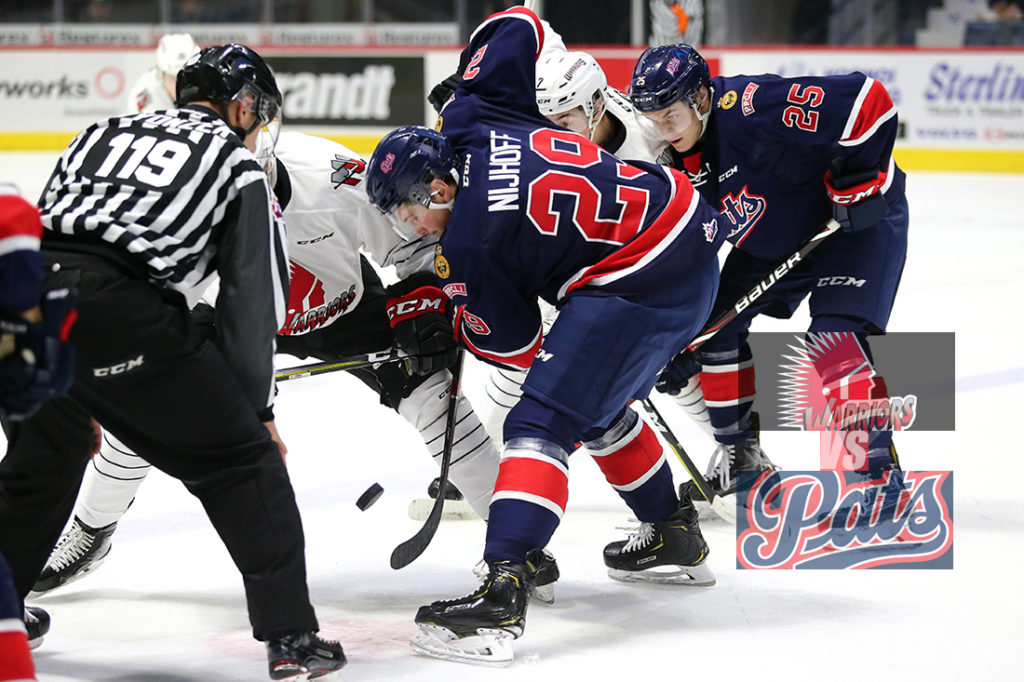 The Regina Pats (8-23-0-1) kick off the final weekend before the Christmas break on Friday at home to the Moose Jaw Warriors (16-7-4-1). Puck drop is at 7:00 p.m. at the Brandt Centre. The Pats are coming off a 4-3 road loss to the Broncos in Swift Current on Wednesday. The Warriors last game was Saturday when they lost at home to the Saskatoon Blades 5-3. Tonight is the third of eight meetings between Regina and Moose Jaw, Regina is 0-2-0-0 so far in the season series. Tonight’s game can be heard with Bennett Dunlop Ford Pats Hockey starting at 6:35 p.m. on 620 CKRM.

The Lead Up: Broncos come from behind to beat Regina Wednesday
The Swift Current Broncos came from behind to beat the Regina Pats 4-3 on Wednesday night in Swift Current. The Pats opened the scoring at 10:09 when Scott Mahovlich buried a rebound for his fifth of the year to make it 1-0. Brett Clayton added to the lead at 16:23 with his first in a Pats uniform and Regina led 2-0 after one. In the second, the Broncos cut the lead in half with a powerplay goal. The Pats got the two-goal lead back when Riley Krane put home his fifth. Sam McGinley picked up his first WHL point with an assist on the goal and Regina led 3-1. The Broncos drew back to within a goal with six minutes left in the period and it was 3-2 after two. In the third, the Broncos tied the game at 11:18 and then at 16:44 Tanner Nagel buried a shot from the left circle to make it 4-3 Swift Current. The Pats pulled Max Paddock for the extra attacker late and had a powerplay to go up six on four but could not find the tying marker and fell 4-3.

Holmes Returns
Pats forward Robbie Holmes returned to the lineup on Wednesday in Swift Current. The 19-year-old had missed the pervious 17 games with a lower body injury. Holmes made an immediate impact, picking up a first period assist. A product of Sherwood Park, Alberta, Holmes attended training camp with the Colorado Avalanche in the fall of 2018. He has played in 15 games this season, scoring four goals and adding three assists for seven points.

McGinley’s First Point
With some injuries on the back end, the Pats called up 16-year-old defenceman Sam McGinley on Tuesday and he made his WHL debut the following night in Swift Current. McGinley picked up his first career Western Hockey League point in his first game with an assist on the Pats third goal of the contest. McGinley was drafted in the fifth round of the 2017 WHL Bantam Draft. He is playing this season at the Edge Hockey School of the CSSHL, he has 15 points in 19 games.

Tight Series
The Pats and Warriors have played in two, one goal games so far in their season series. The Warriors coming out on top 2-1 and 3-2 in the two contests at the Brandt Centre. Austin Pratt and Koby Morrisseau each have goals against Moose Jaw, Tristan Langan has three goals and an assist for the Warriors in the season series. Regina has gone two for nine on the powerplay in the two games and the penalty kill has gone seven for nine.