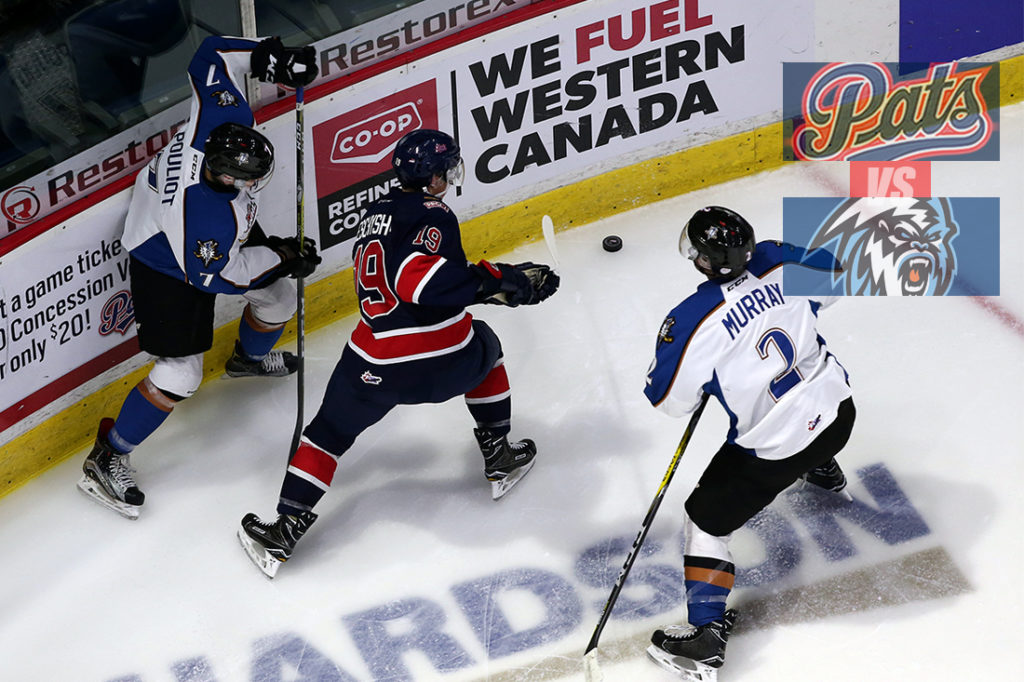 The Regina Pats (9-6-2-0) are back on home ice on Wednesday night, taking on the Kootenay ICE (7-7-1-0). Puck drop is at 7:00 p.m. at the Brandt Centre. The Pats are coming off a 5-3 win in Edmonton on Sunday to wrap up a four game road trip. The ICE meanwhile have won two in a row, including a 4-3 overtime win over the Red Deer Rebels on Sunday. Tonight is the second of four meetings between the Pats and ICE in 2017-18, Regina took the opener 6-3 in Cranbrook on October 24. The game can be heard starting at 6:35 with Bennett Dunlop Ford Pats Hockey on 620 CKRM.

The Lead Up: Pats finish road trip with victory in Edmonton
Jonathan Smart had four assists, Dawson Davidson a goal and three assists and the Pats finished their four game road trip with a 5-3 victory in Edmonton over the Oil Kings. Bryan Lockner and Matt Bradley scored first period goals for Regina and it was a 2-2 game heading to the second. In the middle frame, the Pats powerplay exploded for three goals and a 5-2 lead. Dawson Davidson, Braydon Buziak and Wyatt Sloboshan all found the back of the net with the man advantage. The Oil Kings got one back in the third off the stick of David Kope, but Regina came away with the 5-3 victory. The Pats were outshot 40-30 in the win, the powerplay was three for five and the penalty kill three for five. Max Paddock picked up his second win making 37 saves and the Pats finished their road trip with a 2-1-1-0 record.

Head to Head.
The Pats are 1-0-0-0 against Kootenay heading into tonight’s second of four meetings on the year. The Pats took the first matchup on October 24, 6-3 in Cranbrook B.C. Robbie Holmes, Josh Mahura, Bryce Platt, Sam Steel and Emil Oksanen each had two point nights in the victory. Brett Davis and Cale Fleury led the ICE with two points in the loss. The Regina powerplay was one for two and the penalty kill five for seven. The Pats enter Wednesday night, two points back of Moose Jaw for first in the East Division, the Warriors do hold two games in hand. The ICE meanwhile have 15 points in the standings and are just two back of the Central Division leading Red Deer Rebels.

Career Nights
Pats defencemen Dawson Davidson and Jonathan Smart had career nights on Sunday in Edmonton. Smart picked up four assists, while Davidson had a goal and three helpers. Smart’s previous career high for points in a single game was two, which he did four times in his WHL career. Once in 2015-16 and three times in 2016-17. Davidson’s career high prior to Sunday was three points in a game. He did it in the first game of the 2016-17 season with the Kamloops Blazers and again earlier this year with the Pats against the Red Deer Rebels. Davidson enters Wednesday, tied for sixth among WHL defencemen with 15 points and is on pace to put up 63 points this year. Davidson’s career high is 39 points from the 2015-16 season with the Kamloops Blazers. Smart is tied for 25th with nine points in his first 17 games and is on pace for a 38 point season, his previous high was 28 points in 2016-17.