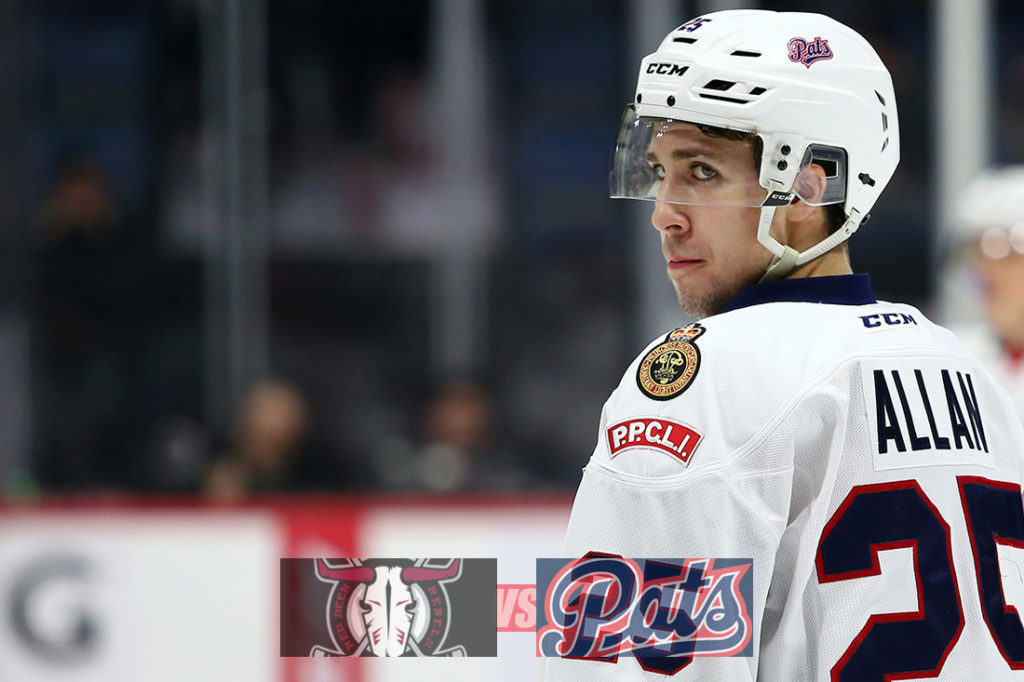 The Regina Pats (12-29-1-1) are right back at it on Saturday night on home ice against the Red Deer Rebels (24-13-2-1). Puck drop is at 7:00 p.m. at the Brandt Centre. The Pats were in Medicine Hat on Friday and dropped a 5-2 decision to the Tigers. The Rebels were in Brandon on Friday and picked up a 5-3 victory, their second consecutive win. Tonight is the second of four meetings between the Pats and Rebels, Red Deer took the first meeting on home ice in a shootout. Tonight’s game can be heard with Bennett Dunlop Ford Pats Hockey starting at 6:35 p.m. on 620 CKRM and will also be broadcast on Access 7.

The Lead Up: Pats finish season series with Medicine Hat with 5-2 loss Friday
The Regina Pats completed their season series with the Tigers in Medicine Hat on Friday night with a 5-2 defeat. The Tigers opened the scoring six minutes into the first, Elijah Brown tipped one home to make it 1-0. The Pats drew even late in the frame, Riley Krane picked up his ninth of the campaign and it was a 1-1 tie after 20 minutes. In the second, Brett Kemp scored twice for Medicine Hat, one even strength and one on the powerplay to make it 3-1. The Pats responded with a goal from Sebastian Streu, his third, and the Medicine Hat lead was cut to 3-2. However, the Tigers added another two goals in the final five minutes of the frame to lead 5-2 at the break. Matthew Pesenti started in the Pats goal to start the third, his WHL debut, and he made four saves to post a zero, but the Pats fell 5-2. Dean McNabb and Matthew Pesenti combined to make 23 saves.

WHL Debut
Goaltender Matthew Pesenti made his WHL debut in Medicine Hat on Friday, coming in to start the third period against the Tigers. The 17-year-old stopped all four shots he faced in a period of work. Pesenti was called up on Thursday with starter Max Paddock dealing with an illness. A product of Saskatoon, Pesenti played in three preseason games in 2018, posting a 2-0-0-0 record to go along with a 3.17 goals against average and a .912 save percentage. He is playing the 2018-19 season with the Saskatoon Blazers of the SMHL. He has posted a 12-6-0-0 record in 18 games with a 2.82 goals against average and a .900 save percentage. The Blazers are currently in first place in the Saskatchewan Midget AAA Hockey League.

Krane Scores Again
Pats forward Riley Krane recorded his ninth goal of his rookie season on Friday in Medicine Hat. The 18-year-old tied the game for the Pats late in the first period. Krane is on a good offensive stretch over the last month, he has put up six goals and three assists since December 5, a total of 15 games. For the season, Krane has nine goals and 15 points in 38 games played. His nine goals are tied for seventh among all Western Hockey League rookies. Pats rookie forward Sergei Alkhimov also has nine goals this year.

Streu on the Scoresheet
Pats forward Sebastian Streu scored his third goal of the season on Friday. The 19-year-old has put up two goals and an assist in his last three games and in the nine games since he returned from the Division 1 World Juniors, Streu has scored twice and added four assists for six points. He has put up nine points in 15 games so far this year with Regina.