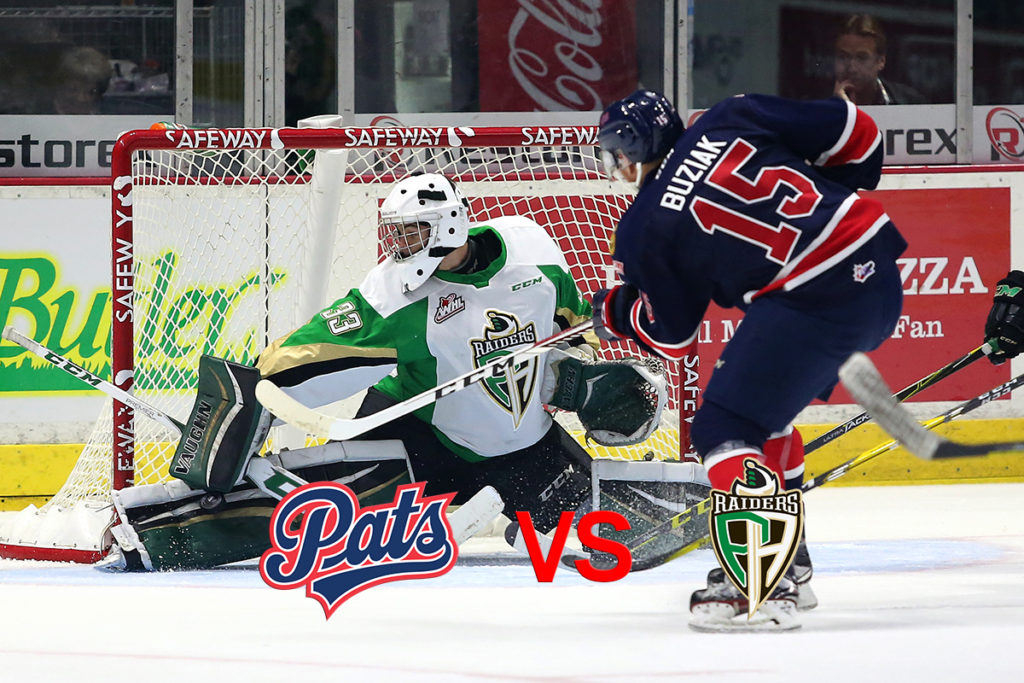 The Regina Pats (17-2-4-0) return home Saturday night to take on the Prince Albert Raiders (6-20-1-0). Puck drop is at 7 p.m. at the Brandt Centre. The Pats are coming off a 3-2 overtime loss to the Kelowna Rockets on Saturday to wrap up their six game road trip. The Raiders were home to the Moose Jaw Warriors Friday and snapped a nine game losing skid with a 5-3 victory. Tonight is the third of eight meetings between the Pats and Raiders. The Pats are 1-0-1-0 in the season series so far. Tonight’s game can be heard on 620 CKRM with Bennett Dunlop Ford Pats Hockey beginning at 6:35 p.m.

Lead Up: Pats Wrap Road Trip with OT Loss
The Regina Pats concluded their six game road trip with a 3-2 overtime loss in Kelowna to the Rockets on Saturday night. The two teams skated to a scoreless first period but the Pats scored the games first goal thanks to Nick Henry on the 5 on 3 powerplay. The Rockets responded with two in a row and led 2-1 in the third. The Pats tied the game halfway through the period when Lane Zablocki scored on a 2 on 1 break. The game needed overtime and Kole Lind scored at the 3:25 mark and Kelowna took the extra point, 3-2 the final. Tyler Brown was stellar for a second straight night, stopping 31 of 34 shots faced and Adam Brooks extended his point streak to 17 games with two assists.

World Juniors
Three members of the Regina Pats are headed to selection camps for the 2017 World Junior Hockey Championships later this month. Forwards Sam Steel and Austin Wagner were among the 32 players invited to Hockey Canada’s selection camp. Steel, in 19 games this year, has 17 goals and 41 points and leads the WHL in scoring. Wagner has played in 18 games and has 11 goals and 8 assists. He is second in the league with four shorthanded. Defenceman Sergey Zborovskiy is headed to selection camp with Team Russia later this month. He has three goals and 13 assists this season and is second in WHL plus/minus at +29. All three players took part in the 2016 CIBC Canada Russia Series.

Pats Acquire Smart
The Regina Pats Hockey Club has acquired 17-year-old defenceman Jonathan Smart from the Kelowna Rockets.  In exchange, the Pats send defenceman James Hilsendager and prospect forward Erik Gardiner to the Rockets. Smart, a first round pick of Kelowna in 2014, has played in 63 games in his WHL career. He’s scored three goals, adding 14 assists and is a plus 21 over parts of two seasons. The Kelowna B.C. product was ranked a ‘C’ skater by the NHL’s Central Scouting Service in the November Players to Watch List for the 2017 NHL Entry Draft.

Brooks Player of the Month
The Western Hockey League announced Thursday that Pats forward Adam Brooks has been named the WHL Player of the Month for November. Brooks, a 20-year-old product of Winnipeg, MB, registered 26 points (4G-22A) in 10 games. Since returning from Toronto where he participated in training camp with both the Maple Leafs and Marlies, Brooks has shredded the WHL, registering points in all 17 games he has suited up for. Brooks averaged 2.60 points per game during the month.