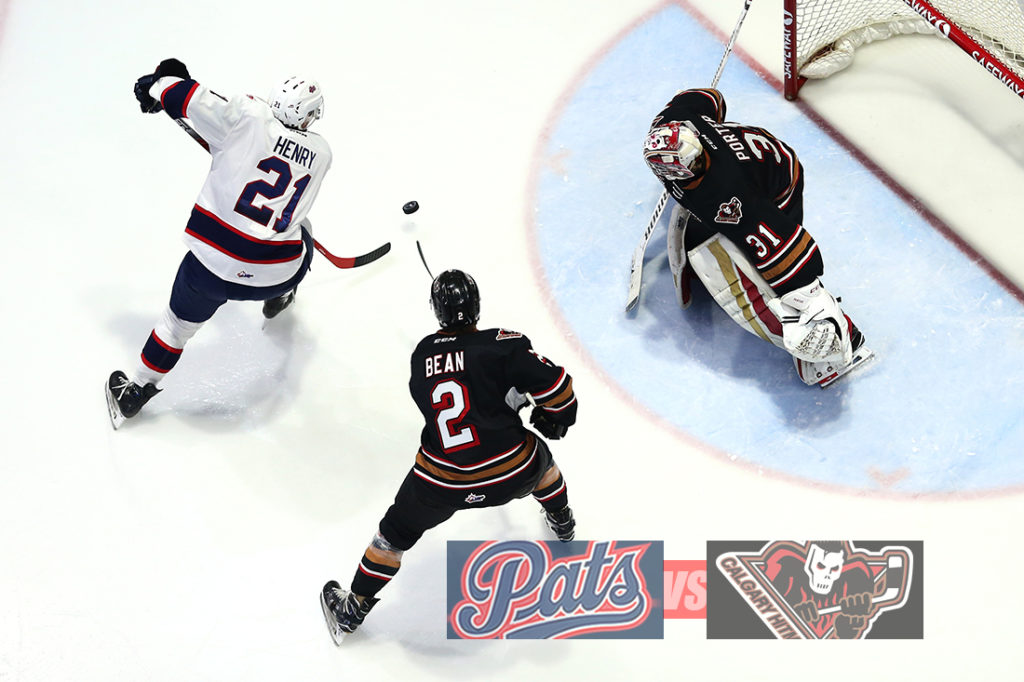 The Regina Pats (11-8-2-0) are back on home ice on Wednesday night against the Calgary Hitmen (6-11-3-0). Puck drop is at 7:00 p.m. at the Brandt Centre. The Pats are coming off a 3-1 loss in Moose Jaw to the Warriors on Sunday. The Hitmen were last in action on Tuesday night in Brandon and lost 6-5 in overtime to the Wheat Kings. Tonight is the first of four meetings between the two clubs in 2017-18, and the first time they will meet since their first round playoff series in 2017. The game can be heard starting at 6:35 with Bennett Dunlop Ford Pats Hockey on 620 CKRM, the game will also be broadcast on Access 7.

The Lead Up: Pats fall 3-1 in Moose Jaw Sunday
The Regina Pats fell 3-1 on the road Sunday in Moose Jaw to the Warriors. The Pats went down 1-0 early when Jayden Halbgewachs scored while the game was four on four. Regina drew even with six minutes left in the opening period when Bryan Lockner jammed home his third of the year and it was 1-1 after 20 minutes. In the second, the Warriors took the lead back when Noah Gregor got the puck across the goal line after it hit the post behind Tyler Brown and Moose Jaw took the one goal lead to the third. It stayed 2-1 until with less than two minutes left, Tanner Jeannot intercepted a pass inside the Pats blueline and ripped a shot into the top of the net to make it 3-1 and that was the final score. The Warriors outshot Regina 44-25, the Pats powerplay was oh for two and the penalty kill four for four. Tyler Brown made 41 saves on 44 shots in the defeat.

Head to Head
The Pats and Hitmen met a total of eight times in 2016-17 between the regular season and the playoffs. Regina was 3-1-0-0 during the regular year against Calgary and swept their first round playoff series. In the four regular season games, Sam Steel scored seven goals and had 12 points, Nick Henry had six points and Dawson Davidson three. The Hitmen were led by Jake Bean and Luke Coleman who each put up five points against Regina in the four game season series. The Pats enter Wednesday, eight points back of the first place Moose Jaw Warriors. The Hitmen sit fifth in the Central Division but are just four points out of second place.

Pats Acquire Cale Fleury from Kootenay
The Pats acquired Montreal Canadiens prospect defenceman Cale Fleury from the Kootenay ICE on Monday. In exchange, the Pats sent 18-year-old defenceman Jonathan Smart, 16-year-old forward Cole Muir, a 2nd round pick in 2018, a 6th round pick in 2018 and a conditional pick in 2019 or 2020 to the ICE. The 2018 2nd round pick was acquired from the Medicine Hat Tigers in the Jordan Hollett trade and the 6th round pick was originally from Kootenay for goaltender Kurtis Chapman. Fleury, drafted 87th overall in the third round of the 2017 NHL Entry Draft by the Montreal Canadiens, has scored six goals and has 10 points through 17 games this season.