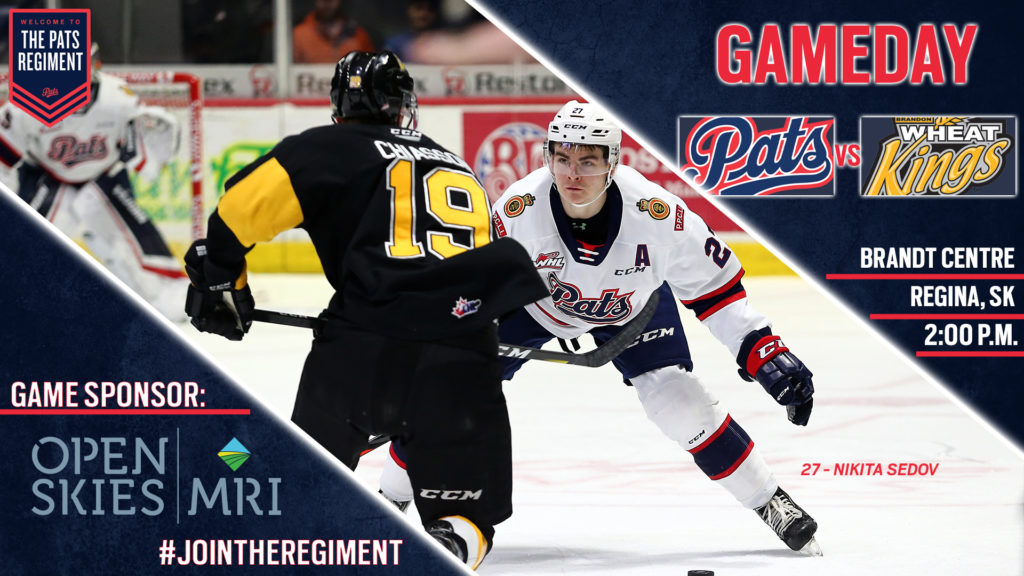 The Regina Pats (19-28-3-2) return to home ice on Monday afternoon when they take on the Brandon Wheat Kings (29-20-3-2). Puck drop is at 2:00 p.m. at the Brandt Centre. The Pats wrapped up a three-game road trip in the Central Division on Friday with a 5-3 win in Edmonton over the Oil Kings and are 6-2-0-0 in their last eight games. The Wheat Kings are coming off a 4-1 loss in Prince Albert on Saturday night. Tonight is the fourth of six meetings between Regina and Brandon, the Pats are 1-2-0-0 so far in the season series. The game can be heard with Bennett Dunlop Ford Pats Hockey starting at 1:35 p.m. on 620 CKRM.

New Leader
Pats forward Robbie Holmes has taken over the team lead in scoring thanks to his second career four-point night on Friday against the Oil Kings. Holmes had four assists in the victory and has 13 points in his last eight games to reach 47 on the year, three more than Carson Denomie and Austin Pratt who are tied for second on the team with 44 points. Holmes is enjoying a career year with 19 goals and 28 assists; his previous high was 16 goals and 29 points.

Career Night
Pats forward Riley Krane set a new career high on Friday in Edmonton with a four-point effort in the win. The 19-year-old scored a goal and had three assists in the contest. Krane’s previous high was two points in a game, which he did nine times in 2019-20. He has set career highs this season with 15 goals and 31 points in 50 games.

Last Pats Game
Robbie Holmes and Riley Krane each put up four points and Donovan Buskey made 36 saves as the Pats picked up a 5-3 win in Edmonton over the Oil Kings on Friday night at Rogers Place. In the first, the Oil Kings opened the scoring two minutes in on the powerplay to lead 1-0. The Pats responded less than two minutes later when Riley Krane finished off a back-door feed from Robbie Holmes for his 15th to tie the game. Regina took the lead with just over three minutes left in the frame when Cole Dubinsky chipped in his fifth and it was 2-1 after 20 minutes. In the second, the Pats scored 29 seconds in to lead 3-1. Robbie Holmes set up Logan Nijhoff for his 11th for the two-goal lead. Edmonton got one back at 10:37 from Scott Atkinson and Regina led 3-2 after two. In the third, Ryker Evans gave the Pats a 4-2 lead at the 10-minute mark, scoring his sixth on a shot from the left point. Edmonton got to within one with less than five minutes left, but the Pats scored into an empty net in the final minute, Logan Nijhoff with his second of the night and 12th of the season to make it 5-3 and that was the final score.

Last Pats Game Vs Brandon
January 5, 2020 – Jiri Patera stopped all 31 shots he faced in the Wheat Kings 5-0 win in Regina. Ridly Greig led Brandon with three assists in the win, while Luka Burzan, Connor Gutenberg and Braden Schneider had two points. The Pats got 34 saves on 39 shots from Donovan Buskey in the defeat.