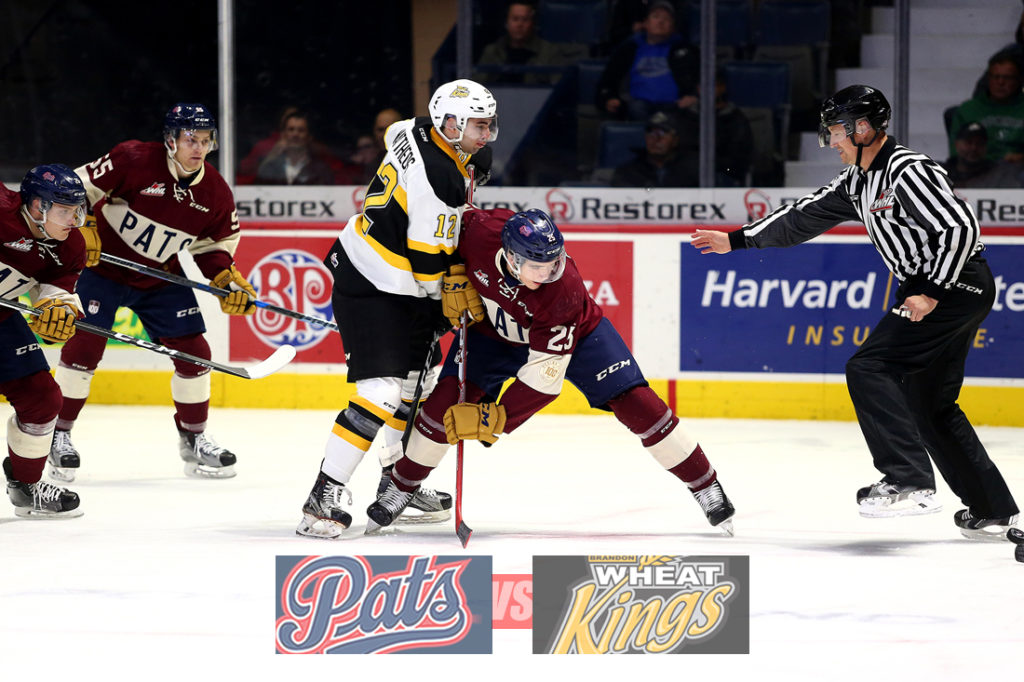 The Regina Pats (16-17-3-0) return from their Christmas break on Wednesday night to visit the Brandon Wheat Kings (24-8-0-1). Puck drop is at 7:00 p.m. at the Westman Place. The Pats were last in action on December 17, losing 3-2 in Saskatoon to the Blades. The Wheat Kings last game was on December 16 when they lost in Moose Jaw, 7-4 to the Warriors. Tonight is the fifth of eight meetings between the two clubs in 2017-18, The Pats hold a 1-1-1-0 record so far in the season series. The game can be heard starting at 6:35 with Bennett Dunlop Ford Pats Hockey on 620 CKRM.

The Lead Up: Pats finish first half with loss in Saskatoon
The Regina Pats finished the first half of the season with a 3-2 loss in Saskatoon to the Blades on Sunday, December 17. The Blades led 2-0 after the first thanks to goals from Braylon Shmyr and Chase Wouters. Regina got to within a goal when Matt Bradley scored his team leading 22nd but the Saskatoon man advantage got it back and it was 3-1 after 40 minutes. In the third, Jake Leschyshyn would put home a rebound for his 10th and Regina was within a goal. The Pats went to the powerplay late and pulled Brown for the extra attacker but could not find the tying goal and fell 3-2. The Pats outshot Saskatoon 30-27, the powerplay was one for six, the penalty kill two for four and Tyler Brown made 24 saves in the defeat.

Head to Head
Tonight is the fifth of eight meetings between the Pats and Wheat Kings with Regina holding a 2-2-0-0 record through the first four. The home team has won every matchup so far this season. Dawson Davidson leads the Pats with a goal and four assists in the season series, Matt Bradley and Emil Oksanen each have four points while Wyatt Sloboshan has three. The Wheat Kings Ty Lewis leads the club with nine points against Regina. Stelio Mattheos has put up eight points and Tanner Kaspick seven in the four games. Regina enters Wednesday with 35 points in the standings, good for the first wildcard spot in the Eastern Conference. Brandon has 49 points and sit in third place in the East Division.

World Juniors
Sam Steel and Team Canada started off the 2018 World Junior Hockey Championships with a 4-2 win over Finland on Tuesday night. Steel scored the second goal of the game in the first period in the victory. Earlier in the day Tuesday, Team Canada released Pats defenceman Josh Mahura. Mahura was with the club through the preliminary games as Canada waited to see if Dante Fabbro would be healthy to play in the tournament. Fabbro was cleared on Tuesday morning and as a result Mahura was sent back.