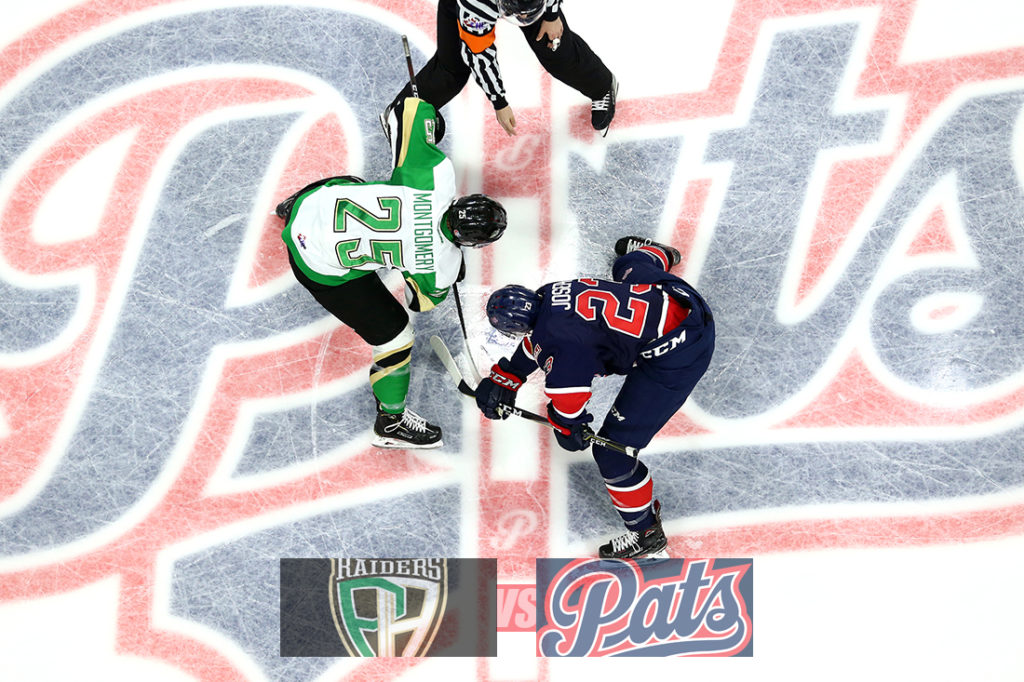 The Regina Pats (11-24-0-1) will look for a third straight win to start the second half on Sunday when they visit the number one team in the CHL in the Prince Albert Raiders (33-2-1-0). Puck drop is at 6:00 p.m. at the Art Hauser Centre. The Pats are coming off back to back 3-2 wins over the Brandon Wheat Kings. The Raiders also won twice after the Christmas break, beating the Saskatoon Blades at home and on the road. Tonight is the fifth of six meetings between Regina and Prince Albert, the Pats are 0-4-0-0 so far in the season series. Tonight’s game can be heard with Bennett Dunlop Ford Pats Hockey starting at 5:35 p.m. on 620 CKRM.

The Lead Up: Pats make it back to back wins over Brandon Friday
The Regina Pats won a second straight game, 3-2 over the Brandon Wheat Kings on Friday night at the Brandt Centre. The Pats opened the scoring 12 minutes into the first, Garrett Wright put home a rebound for his second of the year and it was 1-0 after one. In the second, Austin Pratt scored his team leading 14th from the right circle to double the Pats lead to 2-0. Brandon got one back later in the period and Regina led 2-1 after 40 minutes. The third period saw Regina go back ahead by two when Logan Nijhoff scored on a breakaway for his second and it was 3-1 with eight minutes left. Brandon’s Luka Burzan cut the lead in half with just under three minutes left but the Pats held on for the 3-2 victory. The Pats outshot Brandon 38-20, the powerplay was oh for four, the penalty kill two for two and Max Paddock made 18 saves.

Post Christmas
The Pats have won back to back games coming out of the Christmas break for the first time in eight years. The last time Regina won two out of the break was in 2010 which kick started a four-game win streak. The Pats beat Swift Current 4-3 in a shootout in the first game back from the break and then followed that up with a 3-1 win over the Prince Albert Raiders. Since the 2010-11 season, Regina has split the first two games since the break every year. In the eight seasons since, the Pats have won their home game seven times and lost on the road, once winning on the road and losing at home. The last time the Pats lost both games after the break was in 09-10 against Medicine Hat and Calgary on the road.

Clayton Finding Success
Pats overage forward Brett Clayton is enjoying a good offensive stretch. Clayton was acquired from the Tri-City Americans in late November, but he was kept off the scoresheet for his first six games with Regina. However, in the last five games, the product of Abbotsford, B.C. has scored a goal and has three assists for four points. He is plus four in that stretch with nine shots on goal.

Paddock Solid 2nd Half Start
Pats goaltender Max Paddock is off to a good start in the second half of the season. The 18-year-old is 2-0-0-0 with 2.00 goals against average and a .907 save percentage. Paddock made 21 saves in Brandon on Thursday in a 3-2 victory and followed that up with 18 saves Friday at home.