PREVIEW: Pats on the road Wednesday to take on Raiders 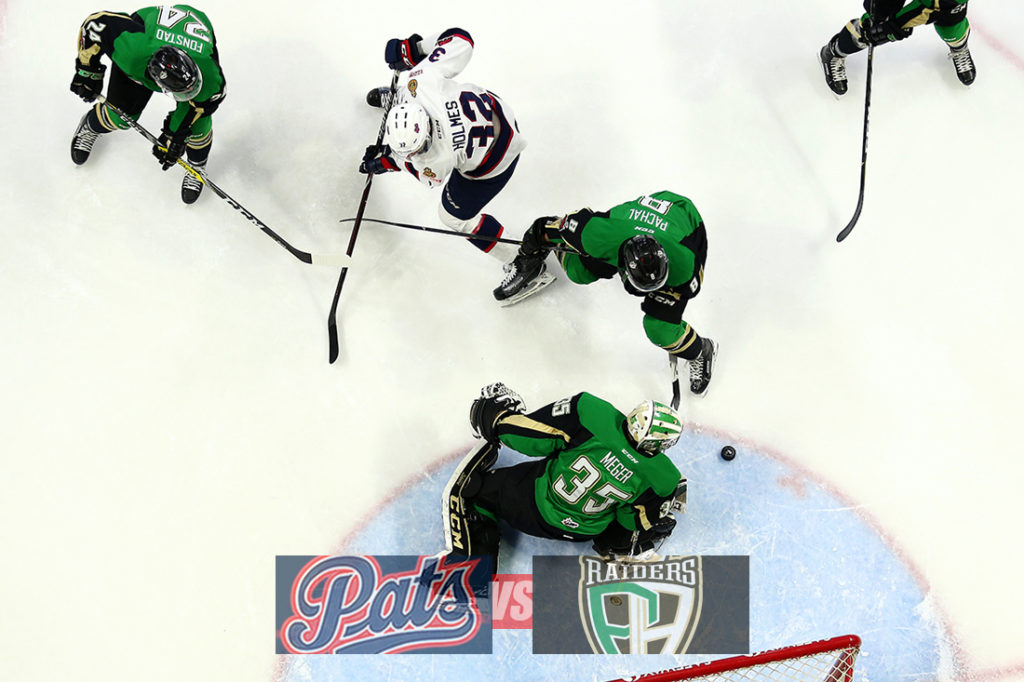 The Regina Pats (23-19-4-0) hit the road Wednesday night to take on the Prince Albert Raiders (16-19-6-2). Puck drop is at 7:00 p.m. at the Art Hauser Centre. The Pats were last in action on Saturday, beating the Calgary Hitmen 8-2 at the Brandt Centre. The Raiders won 4-3 at home to Moose Jaw on the same night. Tonight is the fifth of eight meetings between the two clubs in 2017-18, The Pats hold a 4-0-0-0 record so far in the season series. The game can be heard starting at 6:35 with Bennett Dunlop Ford Pats Hockey on 620 CKRM and will be broadcast on Access 7.

The Lead Up: Pats offence explodes in win over Calgary Saturday
The Regina Pats got a goal and four assists from Josh Mahura in a 8-2 win over the Calgary Hitmen on Saturday night at the Brandt Centre. Logan Nijhoff (3), Jesse Gabrielle (1) and Jared Legien (17) all scored in the first period to make it a 3-0 Pats lead. In the second, Josh Mahura picked up his 14th to extend the lead before Sam Steel scored on a shorthanded breakaway for his 16th and it was a 5-0 game. The Hitmen got one back before the end of the period to trail by four heading to the third. In the final frame, Jesse Gabrielle scored his second of the night, Robbie Holmes snapped home his 13th of the season and Matt Bradley rounded out the scoring with a highlight reel goal for his 27th in an 8-2 final score. Mahura led the way with five points while Cale Fleury, Jesse Gabrielle, Jared Legien and Sam Steel each had three points.

Head to Head
Tonight is the fifth of eight meetings between the Pats and Raiders, Regina has won the first four in the season series. The Pats have outscored Prince Albert 13-7 in the first four matchups. Matt Bradley leads the Pats with a goal and five assists against P.A. while Jake Leschyshyn has five points and Josh Mahura and Cale Fleury have each put up four points. Jordy Stallard leads the Raiders with four points against Regina, Spencer Moe and Brayden Pachal each had three points.

Kubic’s Strong Start
Goaltender Ryan Kubic is off to a great start in his Regina Pats career. The 19-year-old has started three straight games since being acquired from Saskatoon, going 2-0-1-0 with a 2.31 goals against average and a .940 save percentage. The product of St. Andrews, MB highlighted his impressive first week with a 47 save performance in a 3-1 win over the Tigers on Friday.

Mahura Hits 100
Pats defenceman Josh Mahura eclipsed the 100 point mark for his WHL career on Saturday with his five point effort against Calgary. The signed prospect of the Anaheim Ducks has 104 points in his career in 161 games between Regina and Red Deer. For the season, Mahura has 14 goals, which is tied for second among all defenceman, and 42 points which is seventh.