PREVIEW: Pats on the road for game five against the Broncos 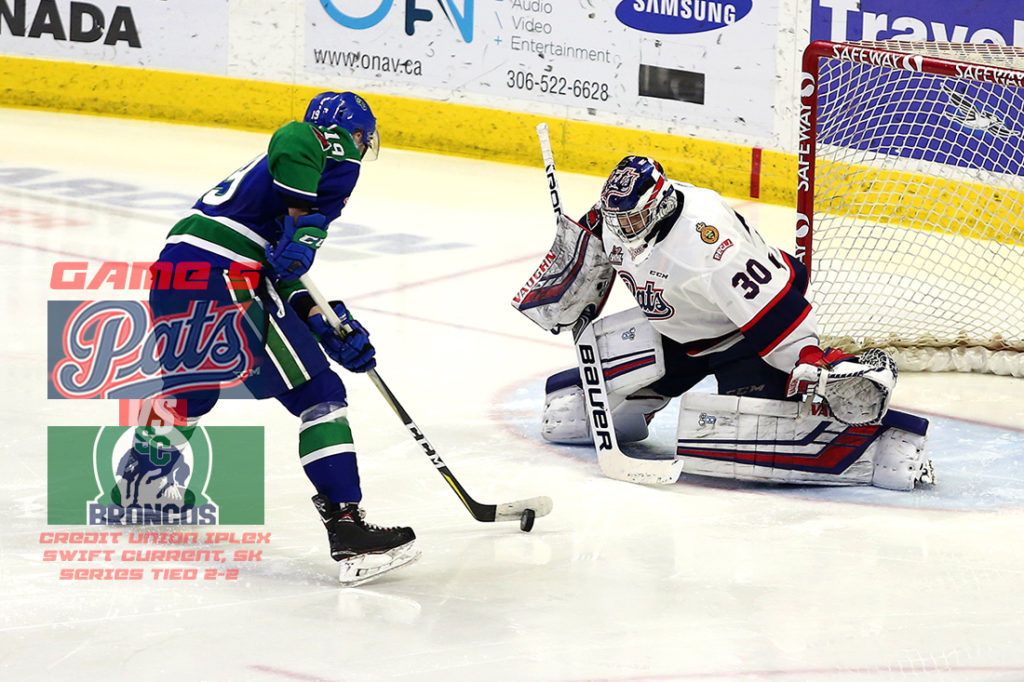 The Regina Pats (2-2) are back on the road on Friday night for game five against the Swift Current Broncos (2-2). Puck drop is at 7 p.m. at the Innovation Credit Union Iplex. The Pats hosted game four on Wednesday and skated to a 6-3 victory at the Brandt Centre to tie the series 2-2. The game can be heard starting at 6:35 with Bennett Dunlop Ford Pats Hockey on 620 CKRM. The game will also be broadcast on Access 7.

The Lead Up: Pats even series with 6-3 Wednesday
Regina evened their first round series with Swift Current at two games on Wednesday night thanks to a 6-3 win at the Brandt Centre. Regina got goals from Cameron Hebig, his third, and Emil Oksanen, his second, to lead 2-0 after one. The Broncos got it to within one early in the second, but the Pats would explode for three straight goals in response. First, Jared Legien ripped one top corner for his first, then Libor Hajek scored his first while on the powerplay and finally Jake Leschyshyn buried his first and the Pats chased goaltender Stuart Skinner, leading 5-1. Swift Current got one back and it was 5-2 heading to the third. The Broncos added another powerplay goal with 7:13 left, but Jake Leschyshyn would seal the victory for Regina with an empty net goal, his second and 6-3 was the final score. Emil Oksanen led the Pats with a goal and two assists, Sam Steel and Jake Leschyshyn both had two points while Ryan Kubic made 26 saves.

Playoff Milestone
Pats Captain Sam Steel put up two assists in game four on Wednesday to reach 50 career playoff points in the WHL. The 19-year-old signed Anaheim Ducks prospect has scored 17 goals and has 33 assists in 41 career playoff games. He has four assists in this series against the Broncos.