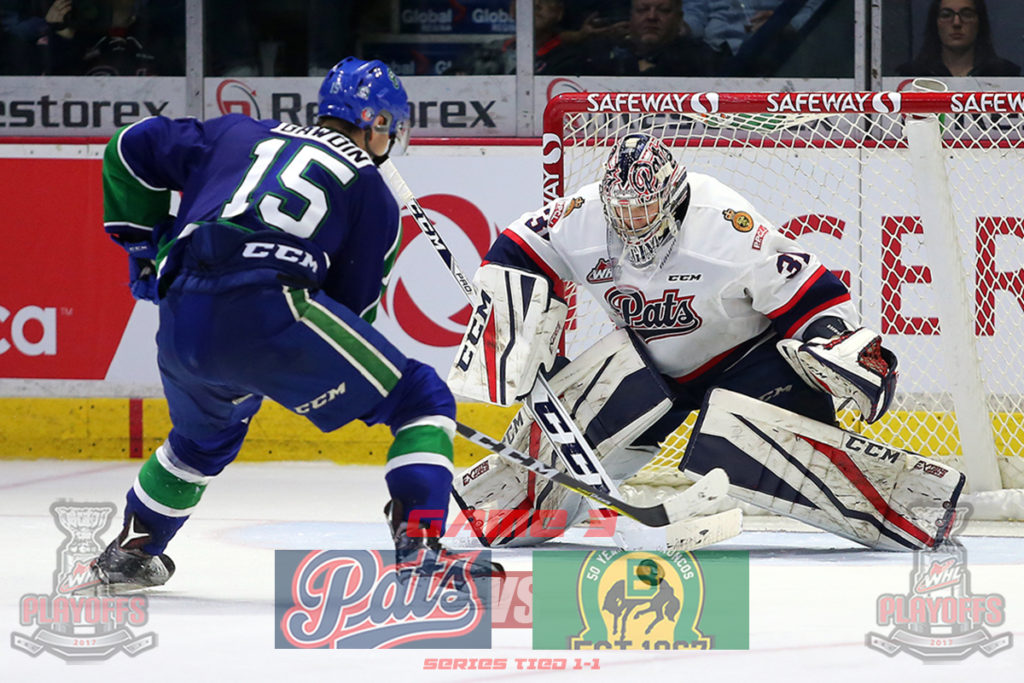 The Regina Pats (5-0-1) hit the road tonight for game three of their second round series with the Swift Current Broncos (5-4-0). Puck drop at the Credit Union Iplex is at 7 p.m. The Pats evened the series at a game a piece on Friday night with a 6-2 win at the Brandt Centre. The game can be heard on 620 CKRM with Bennett Dunlop Ford Pats Hockey beginning at 6:35 p.m. It will also be broadcast on Sportsnet.

Lead Up: Pats Win Game 2 Friday, Even Series
The Regina Pats evened their second round series with the Swift Current Broncos at a game apiece on Friday night with a 6-2 win at the Brandt Centre. Regina opened the scoring in the first, but the Broncos responded with two on the powerplay and led 2-1 after one. In the second, the Pats got goals from Connor Hobbs, Nick Henry and Austin Wagner and took the 4-2 lead to the third period. In the final frame, Robbie Holmes scored his first and Wagner, his second of the night to make it 6-2 and gave the Pats the win. Regina outshot Swift Current 40-17 in game two, Tyler Brown made 15 saves for the Pats, Jordan Papirny 34 for the Broncos. Regina’s powerplay was two for 10 and the penalty kill was two for four.

Series At A Glance
The Pats and Broncos split the first two games at the Brandt Centre, Swift Current taking game one in overtime and the Pats responding with a win in game two. Regina has scored seven goals through the first two games, the Broncos have managed three. The Pats have gone two for 11 on the powerplay and have killed nine of eleven shorthanded situations. The Pats have outshot Swift Current 94 to 53 in two home games to start the series. Austin Wagner leads Regina with three goals in the series, Nick Henry, Connor Hobbs, Sam Steel, Dawson Leedahl and Dawson Davidson each have two points. Goaltender Tyler Brown is 1-0-1 with a 1.78 goals against average and a .925 save percentage. Swift Current’s Aleksi Heponiemi leads his team with three assists while Ryley Lindgren, Tyler Steenbergen and Lane Pederson each have a goal and an assist. Jordan Papirny is 1-1-0 with a 2.69 goals against average and a .936 save percentage.

Wagner Rolling
Pats forward Austin Wagner is on a goal scoring tear to start the 2017 playoffs. The L.A. Kings signed prospect has managed six goals in six games, including three in the second round against the Broncos. In 29 career playoff games, Wagner has 10 goals and 18 points. The 19-year-old was one of six Pats in the regular season to reach the 30 goal plateau.