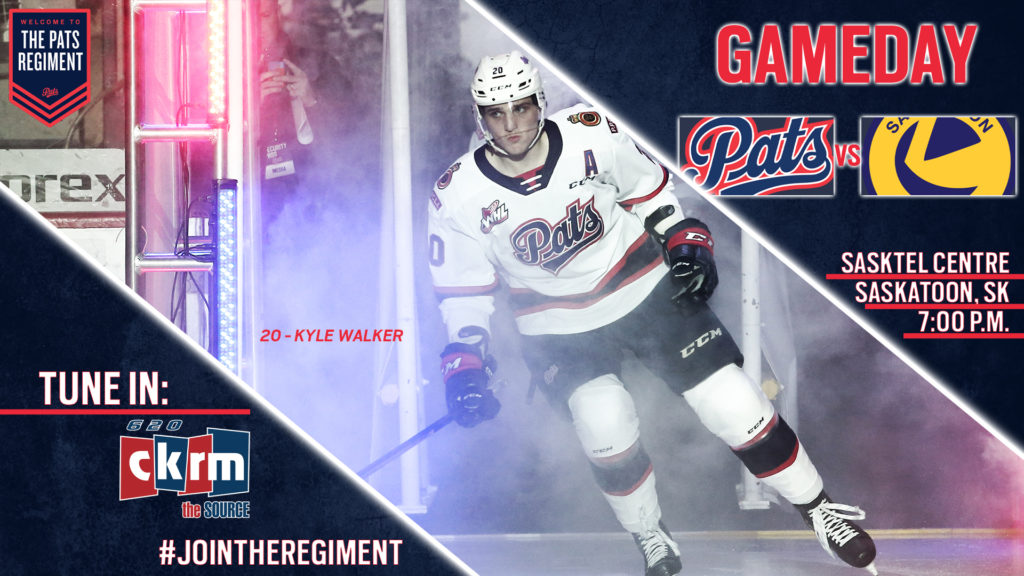 The Regina Pats (15-26-3-2) will make their first trip of the season to Saskatoon on Wednesday night when they take on the Blades (25-20-2-2). Puck drop is at 7:00 p.m. at the SaskTel Centre. The Pats were last in action on Friday when they beat the Victoria Royals 5-4 in a shootout. The Blades last game was on Saturday at home when they fell 4-1 to the Lethbridge Hurricanes. Tonight is the second of six meetings between Regina and Saskatoon, the Pats are 1-0-0-0 in the season series. The game can be heard with Bennett Dunlop Ford Pats Hockey starting at 6:35 p.m. on 620 CKRM and will be broadcast on Access 7.

Quick Facts
– The Pats are 4-4-1-1 in their last 10 meetings with Saskatoon.
– Regina is looking to end a three-game losing streak on the road against the Blades on Wednesday.
– Donovan Buskey is 4-0-0-0 in four career starts against Saskatoon, allowing 10 goals
– Austin Pratt leads the Pats with six goals and eight points in 18 career games against Saskatoon.
– Carson Denomie led Regina in the month of January with eight goals and 16 points in 13 games.
– The Pats won their last two games of January to finish the month with a 5-7-0-1 record.
– Austin Pratt played in his 300th career game on Friday, scoring a goal and adding an assist in the contest.

Second Half Success
Pats forward Logan Nijhoff is enjoying a consistent offensive stretch in the second half of the season. The 18-year-old has scored five goals and added nine assists for 14 points in 16 games in the second half. Only Carson Denomie (17 points), Austin Pratt (15 points), and Robbie Holmes (15 points) are ahead of him in team scoring since Christmas. Nijhoff has set career highs this season with 10 goals and 25 points in 45 games.

Carrier on the Board
Pats forward Cole Carrier scored the first goal of his WHL career on Friday against Victoria. The 17-year-old was acquired from the Kelowna Rockets ahead of the 2020 trade deadline and has put up a goal and an assist in his first three games in a Regina uniform. The product of Strathcona, Alberta picked up his first assist with the Pats last week against Saskatoon, has won 20 of 30 faceoffs in his three games and has put up seven shots on goal. He had put up six goals and 13 points in 30 games with the AJHL’s Whitecourt Wolverines before being traded to Regina.

Last Pats Game
The Regina Pats improved to 6-2-0-2 in their last 10 home games thanks to a 5-4 shootout victory over the Victoria Royals on Friday night at the Brandt Centre. In the first, Brandon Cutler and Gary Haden scored for Victoria in the first 14 minutes to give the Royals a 2-0 lead. Regina got one back with 1:19 left in the frame when Austin Pratt pulled the puck backhand and scored his 15th to make it 2-1. In the second, the Pats tied the game in the early going when Cole Carrier knocked in a rebound for his first career goal in the WHL. Regina outshot Victoria 16-8 in the frame and it was 2-2 going to the third. The Pats took the lead just over two minutes into the third when Austin Pratt put a perfect feed in front for Carson Denomie who scored his 17th. The Royals responded with two goals, 1:21 apart to take the lead 4-3. Regina got the tying goal with just over seven minutes left when Logan Nijhoff potted his 10th to make it 4-4 and that forced overtime and then a shootout. Cole Dubinsky scored the lone goal and the Pats took the extra point in a 5-4 final.

Last Pats Game Vs Saskatoon
January 26, 2020 – Logan Nijhoff, Riley Krane and Ryker Evans each had two points and Cole Dubinsky scored the winner in the Pats 4-3 overtime win over Saskatoon at the Brandt Centre. Donovan Buskey stopped 33 of 36 for Regina, Koen MacInnes 18 of 22 for Saskatoon.