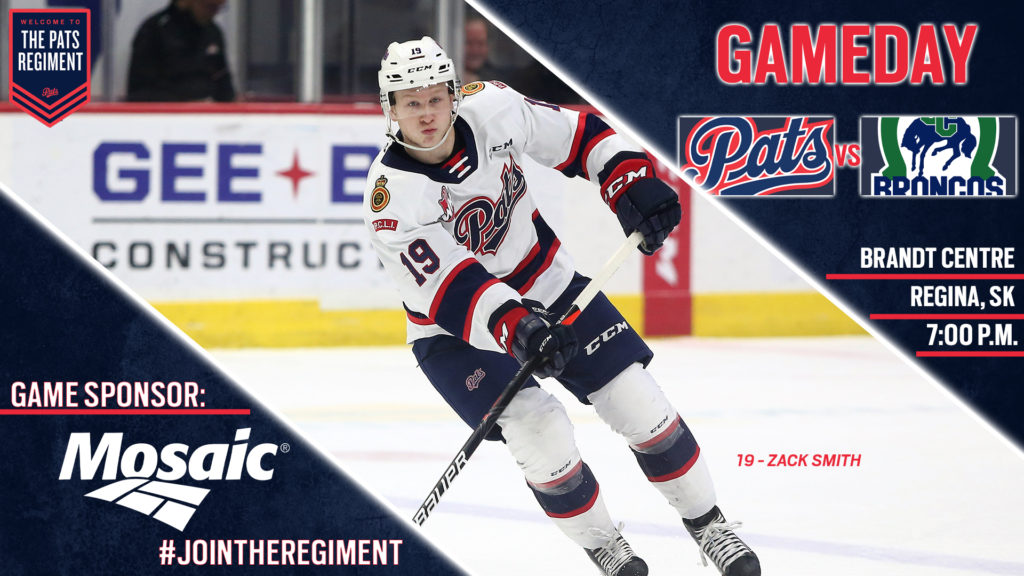 The Regina Pats (17-26-3-2) carry a four-game win streak into their home game on Saturday against the Swift Current Broncos (10-35-1-3). Puck drop is at 7:00 p.m. at the Brandt Centre. The Pats picked up their fourth straight win on Friday night in Swift Current, 4-2 over the Broncos. Tonight is the sixth and final meeting between Regina and Swift Current, the Pats are 2-2-0-1 in the season series. The game can be heard with Bennett Dunlop Ford Pats Hockey starting at 6:35 p.m. on 620 CKRM.

Quick Facts
– The Pats are 5-4-0-1 in their last 10 meetings with Swift Current
– The Pats have won four games in a row for the first time this season.
– Zach Wytinck has put up 20 points in 21 career games against Swift Current.
– Wytinck returned to the lineup on Friday after missing three games and had two assists in Swift Current. He has points in five straight games, scoring a goal and five assists in that stretch.
– Carson Denomie scored twice on Friday and has taken over the team lead in goals with 19.
– Donovan Buskey is 4-0-0-0 in his last four starts with a .905 save percentage.
– The Pats are 9-8-0-1 in their 18 games since the Christmas break.

New Leader
There is a new name atop the goal scoring race for the Regina Pats this season. Carson Denomie scored twice on Friday night in Swift Current to reach 19 goals on the campaign, passing Robbie Holmes who has 18 on the year. Denomie has four goals in his last four contests and leads all Pats scorers with 10 goals and 18 points in 15 games since the calendar turned to 2020. For the season, the Regina product has 19 goals and 42 points in 50 games. In 31 games since being acquired from Moose Jaw he has put up 14 goals and 29 points. His 42 points are second on the team to Austin Pratt who has 44 points on the year.

Win Streak
The Pats have won four straight games for the first time since March of 2018 when they won seven in a row at the end of the season. The Pats twice won three games in a row during the 2018-19 season. During this streak, Regina has won three one goal games, one in overtime and twice in a shootout, followed by Friday’s two goal win in Swift Current.

Last Pats Game
The Regina Pats extended their win streak to four games, thanks to a 4-2 victory in Swift Current over the Broncos on Friday night. In the first, the Pats outshot the Broncos 14-7, but didn’t capitalize on a couple powerplay opportunities and it was scoreless after 20 minutes. In the second, the Pats got the game’s first goal at 2:44 when Carson Denomie picked up his 18th on a shot through the five-hole of Isaac Poulter. The Broncos tied it on a goal from Sam McGinley, but Carson Denomie restored the lead for the Pats at 2-1 with his second of the night and 19th of the year at 17:04. The Broncos went to a five on three powerplay late in the frame and tied the game at two with six seconds left. In the third, the Pats powerplay struck at 7:03 on a great shot from Austin Pratt, his 16th and it was 3-2. Carter Chorney extended the lead to two, five minutes later on a pretty set up from Ryker Evans and Cole Dubinsky and it was 4-2. The Pats salted away the final seven minutes and took the two points on the road. The Pats outshot the Broncos 33-26, the powerplay went one for five and the penalty kill two for three. Carson Denomie, Zach Wytinck, Austin Pratt and Ryker Evans led the offence with two points apiece, while Donovan Buskey made 24 saves.