PREVIEW: Pats looking for bounce back effort Friday in Seattle 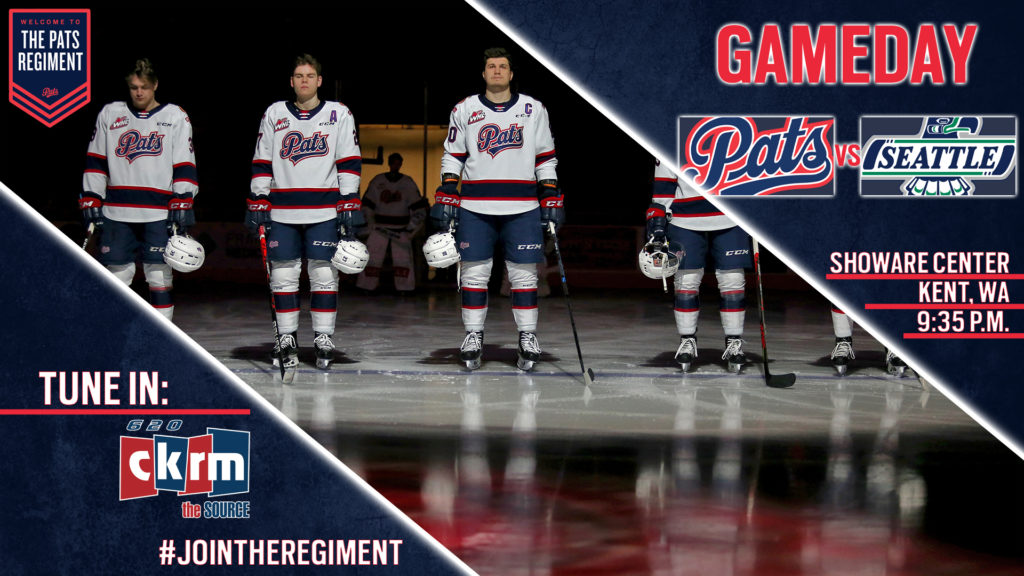 The Regina Pats (13-23-3-2) kick off the final weekend of their U.S. Division road trip on Friday night when they visit the Seattle Thunderbirds (17-20-2-1). Puck drop is at 9:35 p.m. Regina time at Accesso ShoWare Center. The Pats are coming off a 9-4 defeat in Portland on Tuesday and are 1-2-0-0 on their road trip so far. The Thunderbirds last game was on Saturday when they beat the Everett Silvertips 4-3. Tonight is the first and only meeting of the season between Regina and Seattle, the Pats lost the lone meeting last year at home, 6-3. The game can be heard with Bennett Dunlop Ford Pats Hockey starting at 9:10 p.m. on 620 CKRM.

Quick Facts
– The Pats are 4-6-0-0 in the last six regular season meetings with the Seattle Thunderbirds.
– The last three games between the two clubs have ended in 6-3 scores, the Pats winning once, the Thunderbirds twice.
– Robbie Holmes leads the Pats with two goals and three assists in nine career games against Seattle.
– Regina is 5-5-0-1 in 11 games since the Christmas break.
– 2019 first round pick, 15-year-old defenceman Layton Feist made his WHL debut on Tuesday in Portland.
– The Pats re-called 17-year-old forward Josh Paulhus from the Humboldt Broncos of the SJHL on Thursday.
– Austin Pratt, Logan Nijhoff, Robbie Holmes and Carson Denomie are each riding four game point streaks.

100 Points
Pats forward Robbie Holmes and defenceman Zach Wytinck both hit the 100 point mark for their WHL careers on Tuesday in Portland. Wytinck accomplished the feat with an assist in the second period, he has 14 goals and 86 assists in 202 career games in the league. Holmes reached the 100 point mark with a third period assist on Tuesday. He has scored 48 goals and 52 assists in 215 games in the WHL. Holmes and Wytinck are third and fourth on the team in scoring this season with 34 and 33 points respectively. Holmes leads the Pats with 16 goals and Wytinck has the most assists with 27.

Denomie Streaking
Pats forward Carson Denomie is enjoying a strong offensive stretch in the second half of the season. The 19-year-old is coming off a two goal, three point night in Portland on Tuesday and has points in four straight games. He has put up four goals and two assists in that stretch. The Regina product has scored seven goals and has 11 points in the Pats 11 games since the Christmas break. He leads Regina with nine goals on the powerplay for the season and has 17 powerplay points, which also leads the team. His nine powerplay markers are tied for fifth overall in the WHL. Denomie has put up career high numbers so far this year with 15 goals and 34 points in 43 games.

Last Pats Game
The Regina Pats fell 9-4 in Portland to the Winterhawks on Tuesday night. In the first, the Winterhawks scored five times over the first 16:45 of the period to lead 5-0. The Pats got one back from Carson Denomie, his 14th at the 17:44 mark and it was a 5-1 game after the opening period. In the second, Carson Denomie scored his second of the night, 15th of the season to cut the lead to 5-2. Portland restored the four-goal lead, but Jan Cikhart got it back with his third and it was a 6-3 contest. The Hawks responded with two goals after that and led 8-3 after the second. In the third, the Hawks scored at the midway point of the third to make it 9-3. Carter Chorney rounded out the scoring in the game for the Pats, a powerplay goal at 12:30 for his fourth to make it 9-4 and that was the final. The Pats were outshot 38-37, the powerplay was one for four and the penalty kill two for three. Carson Denomie led the offence with two goals and an assist, while Donovan Buskey made 29 saves.

Last Pats Game Vs Seattle
January 6, 2019 – Robbie Holmes, Riley Krane and Kyle Walker each had two point nights for the Pats in a 6-3 home loss to Seattle. The Thunderbirds were led by Noah Philp who scored twice and had two assists for a four point effort. Dean McNabb made 41 saves for Regina, Roddy Ross stopped 19 of 22 for Seattle.