PREVIEW: Pats look to rebound Sunday at home to Everett 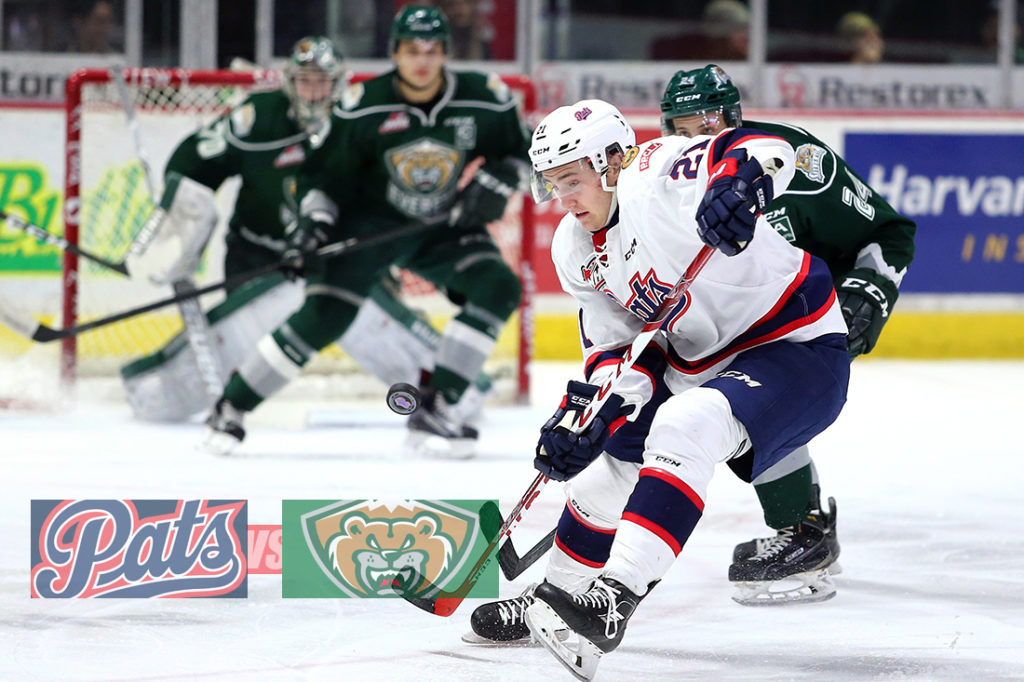 The Regina Pats (3-8-0-0) are back in action on Sunday afternoon at home to the Everett Silvertips (6-4-0-0). Puck drop is at 4 p.m. at the Brandt Centre. The Pats are coming off a tough 3-2 loss at home on Saturday night to the Moose Jaw Warriors. The Silvertips have been off since Friday when they lost 5-2 in Brandon to the Wheat Kings. Tonight is the first and only meeting between the Pats and Silvertips in 2018-19. Today’s game can be heard with Bennett Dunlop Ford Pats Hockey starting at 3:35 p.m. on 620 CKRM.

The Lead Up: Warriors come back to steal two points in Regina Saturday
The Regina Pats surrendered two third period goals in a 3-2 home defeat at the hands of the Moose Jaw Warriors on Saturday night at the Brandt Centre. The Pats opened the scoring on the powerplay when Austin Pratt banked a puck in off the back of the goaltender from below the goal line and it was 1-0 after one. In the second, the Warriors scored shorthanded to tie it up at 1-1. Later in the period, Regina got the lead back when Jake Leschyshyn buried a beautiful shot into the top of the net from the left circle, his fifth of the season, and it was 2-1 Pats after 40 minutes. In the third, Moose Jaw drew even again when Ryan Peckford cleaned up a loose puck in the crease on the powerplay four minutes in. At the 12:39 mark, a tough bounce came off the glass into the slot and Tristin Langan scored the go-ahead goal for the Warriors to make it 3-2 and that was the final score. The Pats went two for seven on the powerplay, the penalty kill was five for six and Regina led on the shot clock 33-26 in the defeat. Jake Leschyshyn and Nick Henry led the offence with two points each, while Max Paddock made 23 saves.

Leschyshyn Man Up
Pats captain Jake Leschyshyn scored his fifth goal of the season on Saturday night, all five of his goals so far this year have come on the man advantage. The signed second round pick of the Vegas Golden Knights has two goals and three assists in his last three games and his 11 points on the year are second most on the team. A product of Saskatoon, Leschyshyn has scored 50 per cent of the Pats 10 powerplay goals in 2018-19. Robbie Holmes is next with two powerplay goals while Austin Pratt, Logan Nijhoff and Aaron Hyman each have one. Leschyshyn leads the WHL in faceoff win percentage at 67.8 per cent (194 for 286), he won 32 of 37 Saturday against Moose Jaw. The next closest is Jake Gricius of the Portland Winterhawks who has won 63.6 per cent of his faceoffs.

Assist Machine
Pats winger and alternate captain Nick Henry picked up his team leading 11th and 12th assists of the season on Saturday night against the Warriors. The Colorado Avalanche prospect has at least one assist in seven of his 11 games this year. His 12 assists are nearing his totals from all of 2017-18 when he had 15 helpers in 53 games. In terms of the WHL rankings, Henry sits tied for 11th in assists and tied for 26th in overall scoring with 14 points. Henry has eight powerplay assists and four at even strength and leads the team with 44 shots on goal.

Pratt Again
Pats forward Austin Pratt found the back of the net again on Saturday night, his fifth of the season which is tied for the team lead with Jake Leschyshyn. Pratt is off to a great start to 2018-19 and has found a home on the club’s top line with Henry and Leschyshyn. Pratt’s five goals and three assists for eight points is fourth on the team and is well past his totals with Regina all of last year where he had four assists in 21 games after a midseason trade with Red Deer.