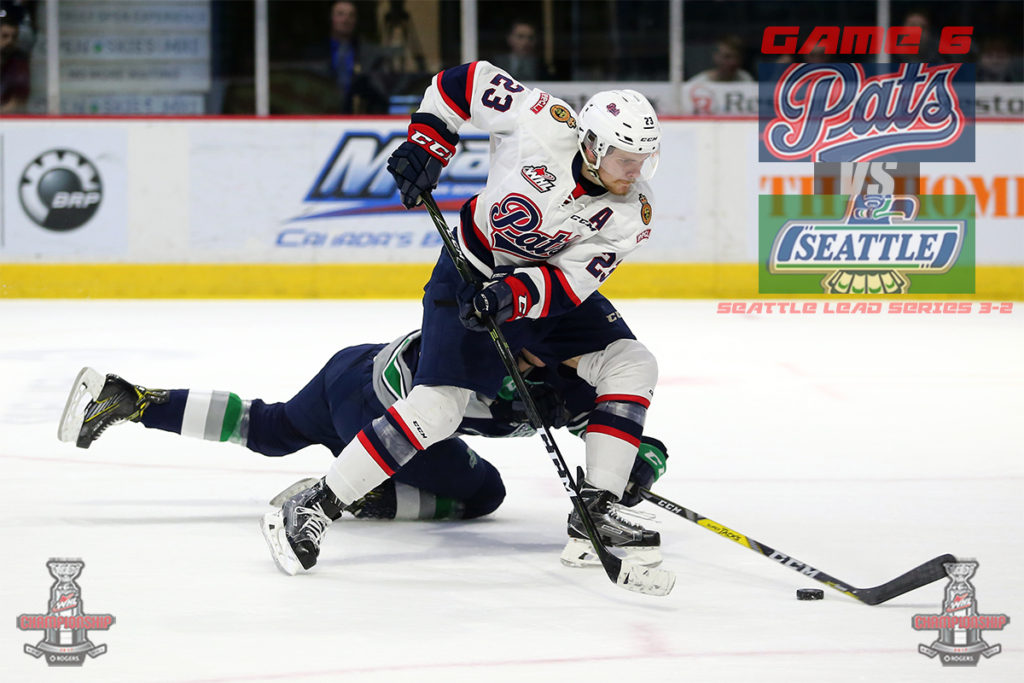 The Regina Pats (14-8) return home tonight for game six of the WHL Championship Series, presented by Rogers, against the Seattle Thunderbirds (15-4). Puck drop at the Brandt Centre is 6 p.m. The Pats fell behind in the best-of-seven series, three games to two on Friday, with a 7-4 loss in game five in Kent, Washington. The game can be heard on 620 CKRM with Bennett Dunlop Ford Pats Hockey beginning at 5:35 p.m. It will also be broadcast on the WHL on Shaw and Access 7.

Lead Up: Pats Drop Game Five Friday in Seattle
The Regina Pats fell 7-4 to the Seattle Thunderbirds in game five of the WHL Championship Series on Friday night and trail the best-of-seven series 3-2. The Pats got off to a good start and led 2-0 on goals from Josh Mahura and Jeff de Wit. The Thunderbirds powerplay responded with two quick ones and the game was tied 2-2 after one. In the second, Dawson Leedahl scored on the powerplay to give the Pats the lead back at 3-2 but Seattle would score four unanswered, two late in the second and two early in the third to lead 6-3. Austin Wagner got the Pats back within two at the midway point of the third but the Thunderbirds picked up an empty netter late to lead 7-4 and that was the final. Seattle outshot the Pats 38-37 in the win, Tyler Brown made 31 saves for Regina, Carl Stankowski 33 for the Thunderbirds.

Series At A Glance
The Pats trail the WHL Championship Series, 3-2, heading into tonight’s game six. Regina has picked a home and road win so far in the series. Seattle has won twice at home and once on the road. The Pats have scored 13 goals while the Thunderbirds have 20 through five games. Regina has been outshot by Seattle 169-142 while the Pats powerplay has gone 7 for 20 and the penalty kill 15 for 23. Josh Mahura leads Regina with three goals and three assists in the series. Sam Steel has put up two goals and three assists and Connor Hobbs, Filip Ahl and Dawson Leedahl have four points. Tyler Brown is 2-3 with a 4.04 GAA and a .877 SV%. Seattle is led by Mathew Barzal and Ethan Bear who have each put up eight points, Keegan Kolesar has seven and Ryan Gropp six points. Carl Stankowski is 3-2 with a 2.56 GAA and a .908 SV%.

Mahura on Fire
Pats defenceman Josh Mahura is leading the way offensively in the WHL Championship Series. The Anaheim Ducks prospect is riding a four game point streak entering game six with three goals and three assists over that stretch. The St. Albert, AB product scored the overtime winner in game two as part of a two goal performance. He put up single assists in games three and four and then a goal and an assist in game five. Mahura is currently third in defence scoring in the playoffs with 19 points and sits first with seven goals.

Special Teams Effect
The powerplay has played a huge factor in the WHL Championship Series so far. Regina is 35.0% in the series with the man advantage (7 for 20), Seattle meanwhile is 34.7% (8 for 23). Both teams have scored at least one powerplay goal in every game while the team that has been shorthanded the least has won every game; excluding game three when both clubs took four penalties.