PREVIEW: Pats Look to Even WHL Championship in Game 2 Tonight 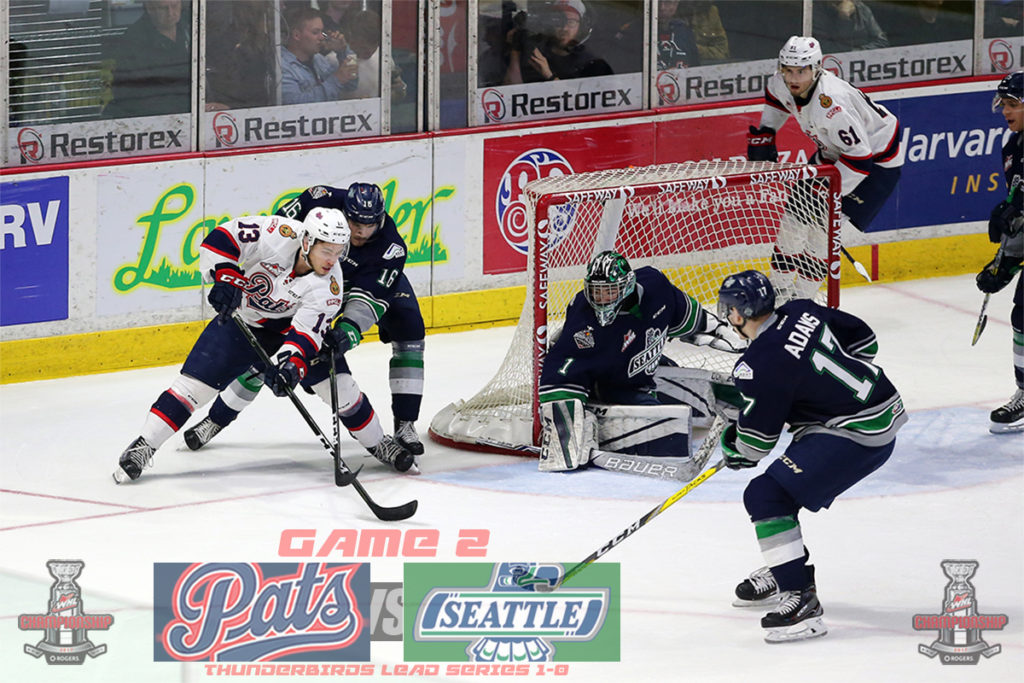 The Regina Pats (12-6) host game two of the WHL Championship Series, presented by Rogers, tonight at home to the Seattle Thunderbirds (13-2). Puck drop at the Brandt Centre is 7 p.m. The Pats dropped game one of the series on Friday night, 2-1 in overtime and trail the best-of-seven set, one game to none. The game can be heard on 620 CKRM with Bennett Dunlop Ford Pats Hockey beginning at 6:35 p.m. It will also be broadcast on the WHL on Shaw and Access 7.

Lead Up: Pats Drop Game One in Overtime
The Regina Pats fell 2-1 in overtime to the Seattle Thunderbirds in game one of the WHL Championship Series on Friday night. After a scoreless first, the Thunderbirds took the 1-0 lead on a powerplay goal in the second. The Pats drew even with a powerplay goal of their own from Connor Hobbs in the third and it was 1-1 after regulation. 14 seconds into OT, Donovan Neuls put in a rebound off the crossbar to give Seattle the 2-1 win and the 1-0 series lead. The Pats outshot the Thunderbirds 32-26 I the defeat, Tyler Brown made 24 saves for Regina, Carl Stankowski 31 for Seattle. The Pats powerplay was one for three and the penalty kill three for four.

Leedahl Streaking
Pats forward Dawson Leedahl extended his point streak to five games on Friday night with an assist on Connor Hobbs powerplay goal in the second period. Leedahl, a product of Saskatoon has three goals and three assists over that streak. The Saskatoon product sits second in team scoring with 21 points in 18 games, 11 goals and 10 assists. His 11 goals is second only to Austin Wagner, who has 14 and his 10 assists are tied for fourth on the team. Leedahl is also fifth in the playoffs in plus/minus at plus 12.

Game One and Two
For a third straight series, the Pats dropped game one on home ice on Friday night. Swift Current and Lethbridge both earned game one wins on the road in the second and third rounds. However, the Pats have bounced back each time to tie the series in game two. Against Swift Current in the second round, Regina picked up a 6-2 win in game two, outshooting the Broncos 40-17 in the process. In round three, the Pats bounced back against Lethbridge with a 3-2 win in overtime in game two after losing game one, outshooting the Hurricanes 51-31 in the contest. Austin Wagner has three goals in game two’s in the playoffs following a Pats loss while Sam Steel, Connor Hobbs and Sergey Zborovskiy have two points each in those games.

Hobbs Out Front
Pats defenceman Connor Hobbs scored the lone goal in the club’s 2-1 overtime loss in game one. The goal was Hobbs 20th point of the playoffs which leads all WHL defenceman. The Washington Capitals prospect has scored five times, which is second to the Thunderbirds Ethan Bear and his 15 assists is the most among all defenceman. Hobbs, a product of Saskatoon, Saskatchewan has the second most powerplay goals with four and the second most powerplay assists with eight through 18 games played.