PREVIEW: Pats look to even season series against Lethbridge 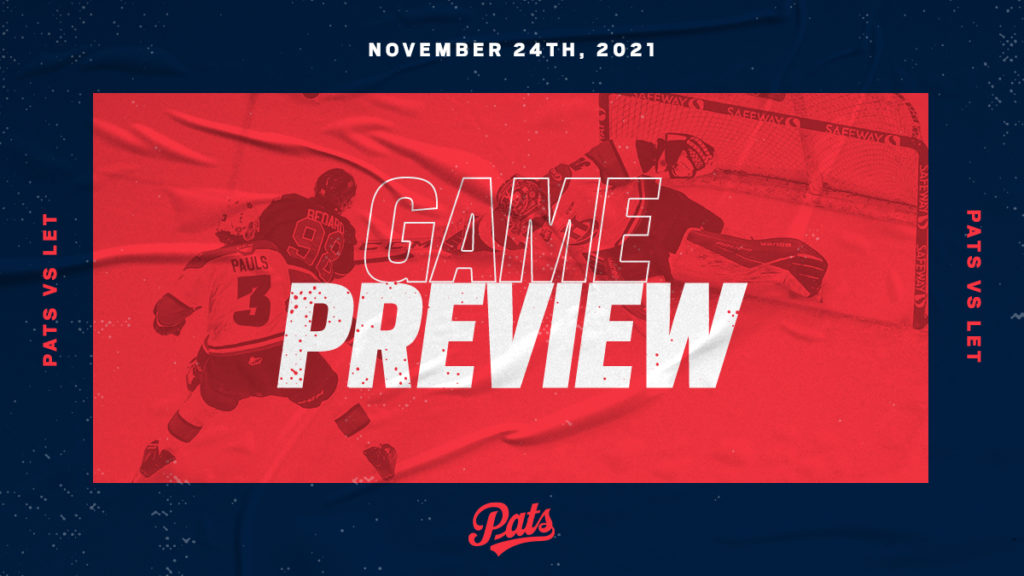 The Pats are coming off a 6-2 win over the Medicine Hat Tigers at Co-Op Place on Tuesday night. Cole Carrier scored a natural hat-trick in a span of 3:40 late in the third period for his first career three goal game, while Ryker Evans (2A), Borya Valis (2A), Stanislav Svozil (2A) and Drew Englot (1G-1A) each tallied multi-point games, while Matthew Kieper made 25 saves for his eighth win of the season. The final shots were 35-27 in favor of the Pats, with Regina going 2-for-4 on the power play and 5-for-5 on the penalty kill.

For the Hurricanes, they are coming off a 7-4 win over the Medicine Hat Tigers on Friday, and are 2-1 since they snapped their six game losing-streak on November 13th, when they defeated the Pats in Regina 6-1. on Friday – Justin Hall had six points (3G-3A) while Logan Wormald (2G-2A) and Alex Thacker (4a) each at four points. Nolan Bentham and Logan Barlage also scored in the game while Jared Picklyk made 25-saves in the victory. The ‘Canes were outshot 28-27 in the contest while going 0-f0r-1 on the power play and 2-for-2 on the penalty kill.

Lethbridge will play seven of their final nine games before Christmas at home at the ENMAX Centre. They have posted a 5-3-0-0 record at home this season. Of the seven home games, five will be against Central Division opponents.

This will mark the second of six meetings this season and second of two in the first half.

7: Number of points (1G-8A) for rookie Pats defenceman Stanislav Svozil over his last six games…he has points in four of his last six contests, with three multi-assist efforts during that time…his 13 helpers and 44 shots ranks first among all rookie defenceman.

97: Shots on goal for Regina Pats forward Connor Bedard leads the WHL…the North Vancouver native is averaging 5.38 shots on net per contest this season along with nine goals and 14 points in 18 games…he scored 3G-1A over his last four games.

265: Faceoff wins for Pats captain Logan Nijhoff is the highest total in the WHL ahead of Prince Albert’s Reece Vitelli (263)…he went 17-25 on the faceoff dot on Tuesday in Medicine Hat and holds 57.6 faceoff win percentage this season…he also has goals in back-to-back games.