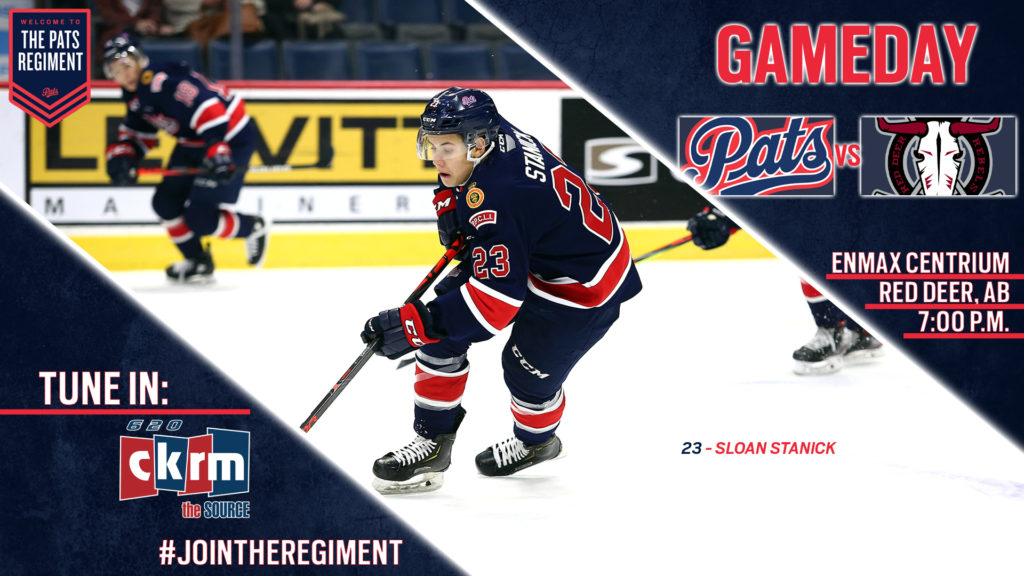 The Regina Pats (1-10-0-0) conclude their two game Central Division road trip on Saturday night against the Red Deer Rebels (4-6-0-0). Puck drop is at 7:00 p.m. at the Enmax Centrium. The Pats were last in action on Friday night in Lethbridge and lost a tight one to the Hurricanes 2-1. The Rebels last game was at home to Edmonton on Friday where they dropped a 5-1 decision. Saturday will mark the first of four meetings between Regina and Red Deer in the 2019-20 season. Tonight’s game can be heard with Bennett Dunlop Ford Pats Hockey starting at 6:35 p.m. on 620 CKRM.

Quick Facts
-The Pats will visit Red Deer for the first of four meetings between the two clubs. The four game season series will conclude on December 7.
-Regina was 1-3-0-0 against the Rebels in 2019-20.
-The Pats and Rebels have gone to overtime or a shootout in four of the last five meetings in Red Deer.
-Regina is 4-0-1-1 in their last six visits to the Enmax Centrium in Red Deer.
-Logan Nijhoff will return from a one game suspension tonight and play in his 100th career WHL game.
-The Pats are 0-4-0-0 on the road this season.
-The Pats are 11 for 12 (91.6%) on the penalty kill in their last three games.
-Regina has four powerplay goals in their last two games.
– Zach Wytinck scored his first goal with the Pats on Friday night in Lethbridge.

Wytinck on the Board
Pats defenceman Zach Wytinck scored his first goal with Regina on Friday night in Lethbridge. The overager scored on a blast from the blue line in the first period on the powerplay. Wytinck was acquired from the Brandon Wheat Kings earlier this month and in three games has a goal and two assists. For his season, Wytinck has two goals and four assists, those point totals lead all Pats defencemen.

Penalty Kill Success
The Pats penalty kill is enjoying its best stretch of the season. In the last three contests, Regina has gone 11 for 12 on the penalty kill for a 91.6 per cent efficiency. The Pats did not take a penalty last Saturday against Vancouver, went four for four at home to Lethbridge Sunday and then killed seven of eight penalties last night in Lethbridge. The Regina penalty kill is up to a tie for 16th in the WHL so far this year at 77.4 per cent through their first 11 games of the year.

Last Pats Game
The Regina Pats lost a tight one in Lethbridge, 2-1 to the Hurricanes on Friday night at the Enmax Centre. In the first, the Hurricanes struck twice in the opening seven minutes, one even strength and the other on a five on three powerplay. The Pats powerplay responded at the midway point of the period, Zack Wytinck scored his first with the Pats, second of the season, on a shot from the blueline and it was 2-1 after the opening stanza. In the second period, the Pats had four powerplays to the Hurricanes three but neither team took advantage and it was 2-1 heading to the third. In the final frame, The Pats outshot the Hurricanes 11-5 but couldn’t find a tying goal and lost the game 2-1. The Pats outshot the Hurricanes 33-22, the powerplay was one for nine, the penalty kill went seven for eight, while Danton Belluk made 20 saves.

Last Pats Game Vs Red Deer
February 27, 2019 – Cole Dubinsky and Brady Pouteau scored for Regina in a 5-2 home loss to the Red Deer Rebels at the Brandt Centre. Ethan Sakowich scored twice for the Rebels, while Cameron Hausinger and Brett Davis each chipped in with two-point games. Max Paddock made 22 saves in net for Regina, Ethan Anders stopped 32 of 34 for the Red Deer Rebels.