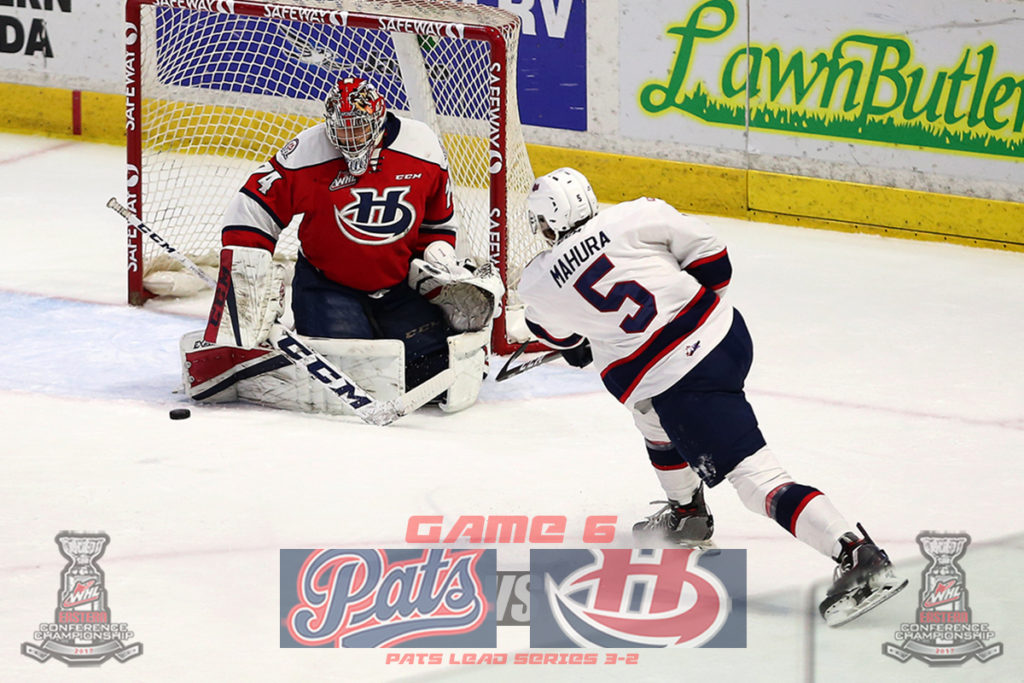 The Regina Pats (11-5) look to close out the Eastern Conference Championship series tonight on the road in game six against the Lethbridge Hurricanes (10-9). Puck drop at the Enmax Centre is 6 p.m. The Pats won game five on home ice Friday, 5-3 to take a three games to two lead in the best-of-seven set. The game can be heard on 620 CKRM with Bennett Dunlop Ford Pats Hockey beginning at 5:35 p.m. It will also be broadcast on the WHL on Shaw and Access 7.

Lead Up: Pats Take 3-2 Series Lead with Game 5 Victory
Adam Brooks had four assists, Dawson Leedahl scored the game winner, six minutes into the third and the Pats won game five, 5-3 for a 3-2 series lead on the Lethbridge Hurricanes on Friday night. The Pats battled back from 1-0 and 2-1 deficits thanks to goals from Josh Mahura and Sam Steel in the first and second periods. Filip Ahl gave the Pats their first lead, midway through the second with his third but the Hurricanes would tie it up and it was 3-3 heading to the third. 6:25 into the final period, Adam Brooks set up Dawson Leedahl all alone in front and he buried his 11th to make it 4-3. Austin Wagner added an empty netter late and the Pats took game five, 5-3. The Hurricanes outshot Regina 32-31, Tyler Brown made 29 saves for the Pats, Stuart Skinner 26 for Lethbridge. The Regina powerplay was 1/2 and the penalty kill 3/4.

Series At A Glance
After splitting the first four games of the Eastern Conference Championship series, the Pats picked up a win in game five on home ice to lead 3-2.  The Pats have scored 16 goals through five games, the Hurricanes have 13. Regina has outshot Lethbridge 182-141, the powerplay has gone two for 16 and the penalty kill 14 for 16 with a shorthanded goal. Adam Brooks leads Regina with two goals and six assists for eight points in the series. Sam Steel and Austin Wagner each have five points while three others have four. Tyler Brown is 3-2 with a 2.29 goals against average and a .914 save percentage. The Hurricanes are led by Giorgio Estephan who has put up four points through five games while six others have picked up four points in the series. Stuart Skinner is 2-3 with a 2.68 goals against average and a .922 save percentage.

Brooks On Fire
Pats Captain Adam Brooks is on a tear over his last two games of the Eastern Conference Championship Series. The overage forward out of Winnipeg has scored a goal and has six assists in the last two contests, both Pats wins. Brooks is up to a tie for 12th in playoff scoring with 17 points in 14 games. The Toronto Maple Leafs prospect is also in a tie for ninth with 12 assists and is second with four game winning goals.

Wagner Returns
The Pats leading goal getter in the playoffs, Austin Wagner, returned to the lineup in game five after missing game four with an undisclosed injury. The L.A. Kings signed prospect assisted on the game winner in the third in game five and also scored an empty netter to seal the 5-3 victory. The 19-year-old from Calgary is up to 13 goals in 15 games in the post-season, second to only the Kelowna Rockets Reid Gardiner who has scored 15 times. Wagner is tied for 12th in overall scoring with 17 points in 15 games.