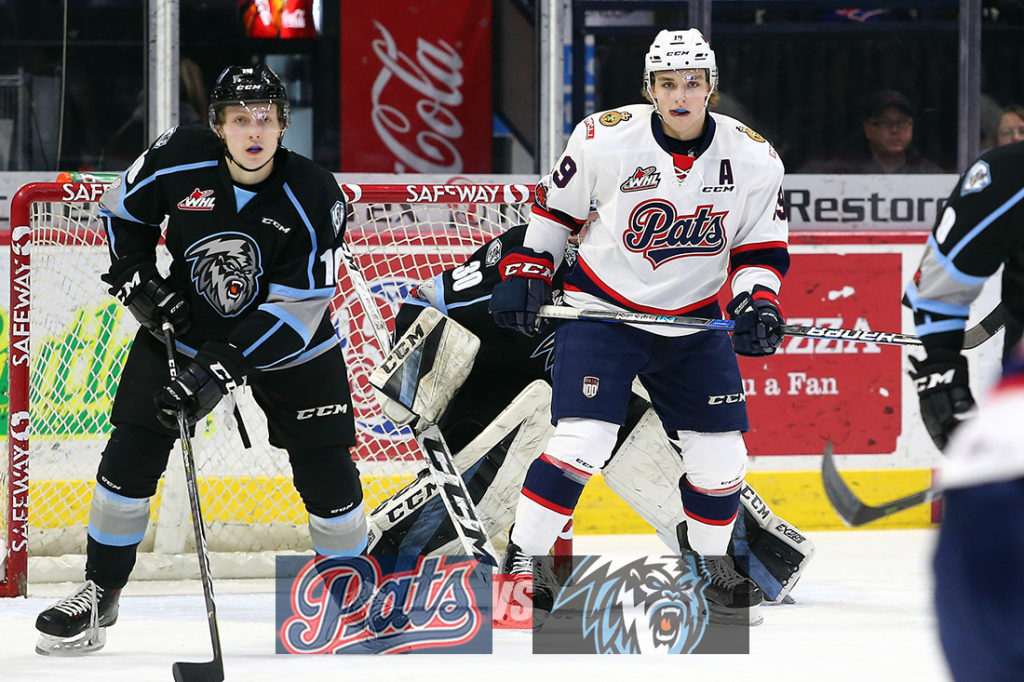 The Regina Pats (36-25-5-1) can clinch a playoff spot on Friday night with a road win over the Kootenay ICE (25-38-3-1). Puck drop is at 8 p.m. Regina time at Western Financial Place. The Pats were last in action on Tuesday in Medicine Hat, winning a third straight game, 6-3 over the Tigers. Kootenay took on Medicine Hat on Sunday and fell 4-3 on home ice. Tonight is the fourth and final meeting on the season between the Pats and ICE, Regina holds a 2-1-0-0 record in the season series. The game can be heard starting at 7:35 with Bennett Dunlop Ford Pats Hockey on 620 CKRM.

The Lead Up: :Late flurry gives Pats third straight win
The Regina Pats scored three times in the final five minutes to pick up a third straight win, 6-3 in Medicine Hat on Tuesday night. The Pats opened the scoring early when Jesse Gabrielle ripped a one timer short side for his 12th. The Tigers responded with goals 56 seconds apart to lead 2-1 but Koby Morrisseau drew the Pats even at two late in the first with his fourth. In the second, Emil Oksanen scored on the powerplay for his 16th to give the Pats a 3-2 lead, but the game ended up tied 3-3 going to the third. In the final frame, Regina scored three times in the final five minutes. First, Libor Hajek picked up his 12th on a point shot on the powerplay, then Koby Morrisseau potted his second of the night, fifth of the season to make it 5-3 and finally Josh Mahura hammered in his 22nd, a powerplay goal and 6-3 was the final score.

Head to Head
Tonight is the fourth and final meeting between the Pats and ICE, Regina is 2-1-0-0 in the season series. The Pats have outscored Kootenay 13-8 in the three games, the powerplay has gone two for 11 and the penalty kill eight for 11. Sam Steel, Robbie Holmes and Cameron Hebig have all put up four points against Kootenay this year while Jake Leschyshyn has three points. The ICE are led by Colton Kroeker who has four points, Alec Baer and Brett Davis each have three.

Win And You’re In
With a victory tonight, the Pats would clinch a playoff berth for a fifth consecutive season and for the sixth time in the last seven years. In the previous five playoff years, twice the Pats have won the East Division and once the Scotty Munro Memorial Trophy as regular season champions. Regina has averaged 40 wins and 89 regular season points the last five times they made the playoffs. This season, the Pats are on pace for 39 wins and 84 points in the standings.

Steel Jumps up All-Time Scoring List
Thanks to a nine game point streak with 16 points in that stretch, Pats captain Sam Steel has passed Brian Varga and taken sole possession of 12th on the club’s all-time points list with 332 points in 254 games. The product of Sherwood Park, AB is two back of Brett Lysak (334 points) for 11th and three back of Adam Brooks (335) who sits 10th. Steel has five games left in the regular season and projects to finish with 340 points which would stand alone for 10th, two points back of ninth all time, Louis Dumont (342 points).