PREVIEW: Pats look to bounce back Wednesday at home to Calgary 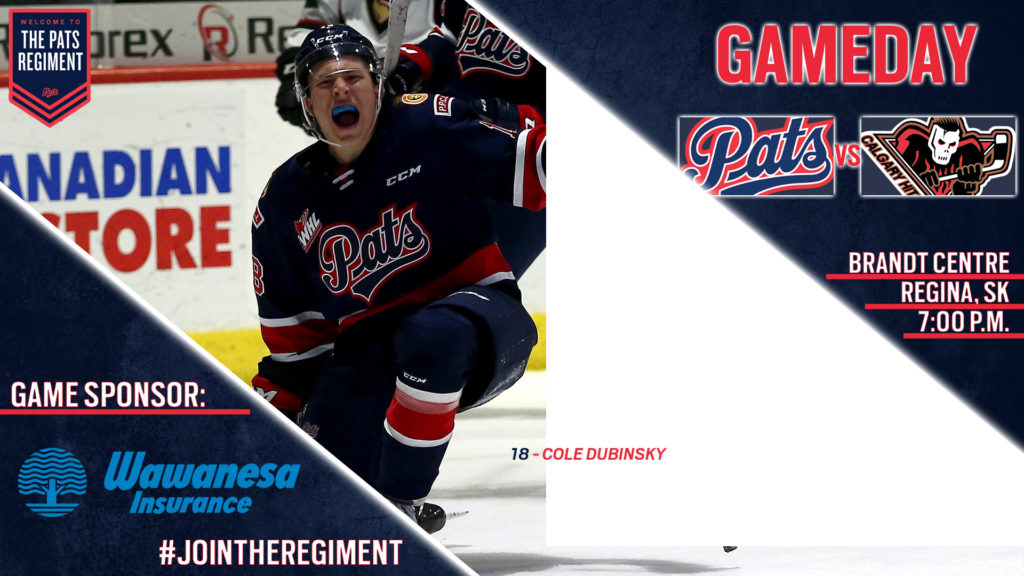 The Regina Pats (3-13-2-0) continue a stretch of four games in five nights on Wednesday when they host the Calgary Hitmen (10-6-2-1). Puck drop is at 7:00 p.m. at the Brandt Centre. The Pats are coming off a 2-1 loss at home to the Swift Current Broncos on Tuesday night. The Hitmen have been off since Sunday when they lost 5- in overtime in Prince Albert to the Raiders. Tonight is the second of four meetings between Regina and Calgary in 2019-20, the Pats are 0-0-1-0 so far in the season series. The game can be heard with Bennett Dunlop Ford Pats Hockey starting at 6:35 p.m. on 620 CKRM.

Quick Facts
– The Pats and Hitmen are meeting for the second time this season, Calgary took the first meeting outdoors at Mosaic Stadium, 5-4 in overtime.
-The Pats are 2-3-2-0 in their last seven games.
-The Pats are 1-5-2-0 against the Central Division so far this season.
-Zack Smith has points in consecutive games (1G, 1A) and has two goals and two assists in the first six games of his WHL career.
– Carter Chorney has points in both games since being acquired from Swift Current, scoring a goal and adding an assist.
-Tyson Feist has assists in back to back games.
-The Pats penalty kill has gone 16 for 18 in their last four games (88.9 per cent).

Chorney Off to Good Start
Pats forward Carter Chorney has his career in Regina off to a good start. The 18-year-old has put up a goal and an assist in two games since being acquired from the Swift Current Broncos. Chorney scored on Saturday in the Pats win over Prince Albert and then added an assist in the loss to Swift Current on Tuesday night. He has two goals and five assists for seven points in 19 games on the season.

Smith Continues to Roll
Pats rookie forward Zack Smith picked up his second goal of his young WHL career on Tuesday against the Broncos. The 18-year-old tipped home a Nikita Sedov point shot to tie the game at one in the second. In six games since joining the Pats from the Melfort Mustangs, Smith has scored twice and has two assists for four points. He has been kept off the scoresheet just twice in his first six games in the WHL.

Last Pats Game
The Regina Pats dropped a 2-1 decision at home to the Swift Current Broncos on Tuesday night at the Brandt Centre. The Broncos scored the lone goal of the first when Ethan Regnier jammed in a loose puck in front to make it 1-0. The Pats tied it up in the second, Zack Smith tipped in a Nikita Sedov point shot for his second of the season and it was 1-1 heading to the third. In the final frame, the Pats outshot the Broncos 21-2, but it was Swift Current who got a goal from Sergei Alkhimov and held on for the 2-1 victory. The Pats outshot the Broncos 49-28, the powerplay was oh for six, the penalty kill two for two and Max Paddock made 26 saves.

Last Pats Game Vs Calgary
October 27, 2019 – The Calgary Hitmen beat the Regina Pats 5-4 in overtime in the 2019 Prairie Classic, outdoors at Mosaic Stadium. Austin Pratt and Robbie Holmes led the Pats with a goal and an assist each, while Max Paddock made 43 saves. Egor Zamula, Mark Kastelic and Riley Stotts each had two points for the Hitmen, while Jack McNaughton made 23 saves.