PREVIEW: Pats look to bounce back Saturday in Victoria 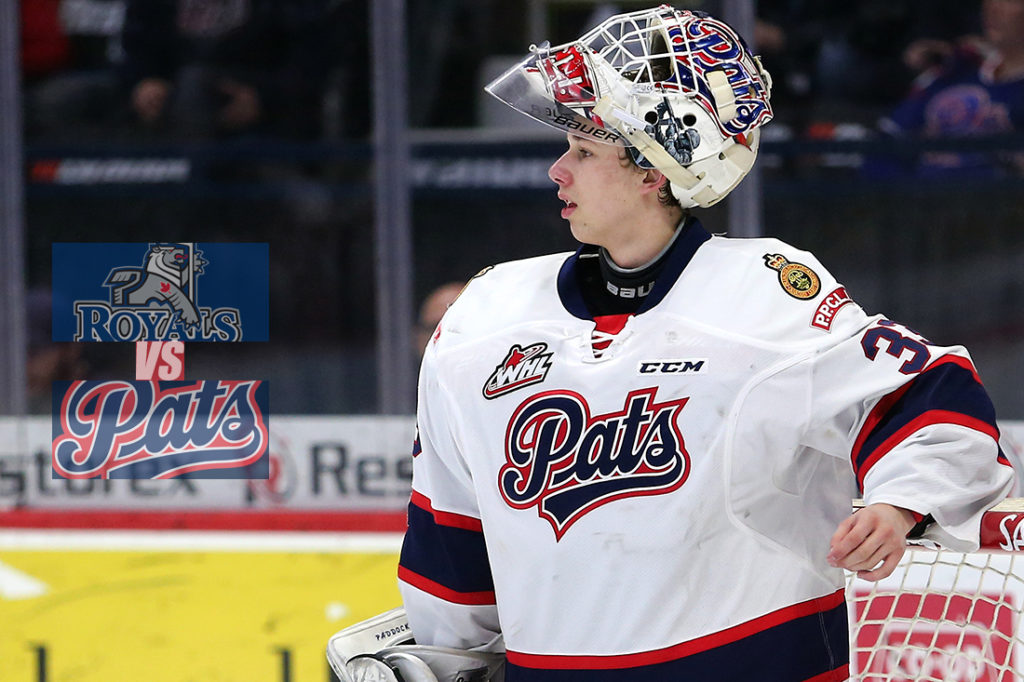 The Regina Pats (7-14-0-0) are back in action on the road on Saturday night against the Victoria Royals (10-6-0-0). Puck drop is at 9:00 p.m. Regina time at the Save-On-Foods Memorial Arena. The Pats are coming off a tough 10-4 loss to the Vancouver Giants on Friday night. The Royals have been off since last Saturday when they lost 7-2 at home to the Spokane Chiefs. Tonight is the first and only meeting of the 2018-19 season between the Pats and Royals, Regina is 1-2-0-0 in the last three meetings with Victoria. Tonight’s game can be heard with Bennett Dunlop Ford Pats Hockey starting at 8:35 p.m. on 620 CKRM.

The Lead Up: Pats drop tough one to Vancouver Friday
The Regina Pats got three goals and an assist from Nick Henry in a 10-4 loss to the Vancouver Giants on Friday night. The Giants scored the game’s first four goals before Nick Henry potted his ninth and it was 4-1 after one. Henry added his second of the contest, 10th of the year early in the frame while shorthanded and the Giants lead was cut to two. Vancouver responded with two from Milos Roman to lead 6-2 after 40 minutes. The Giants got two more early in the third, and then Jake Leschyshyn picked the top corner on the powerplay for his 14th and the Pats trailed 8-3. After Vancouver got their ninth of the night, Henry completed his hat trick on a two on one rush, his 11th of the year and it was 9-4. The Giants added another after that and took the two points in a 10-4 final. The Pats were outshot 45-28, the powerplay was one for seven and the penalty kill five for eight with a shorthanded goal. Nick Henry had a hat trick and an assist, Jake Leschyshyn put up three points and Max Paddock and Dean McNabb combined to make 35 saves.

Henry’s Big Night
Pats forward and Alternate Captain Nick Henry scored his third hat trick in a Pats uniform on Friday night against the Vancouver Giants. Two of his three goal night’s have come in regular season play in the WHL, while the other was in the 2018 Memorial Cup against the Swift Current Broncos. Henry’s first hat trick came early in his rookie season of 2016-17 on the road against the Kootenay ICE. Henry’s four points Friday brings him up to 33 for the season, passing his totals from all of last year when he had 29 points in 54 games. The Colorado Avalanche prospect sits in a tie for sixth in scoring in the WHL with his 33 points, his 22 assists are seventh best and his 11 goals are tied for 21st.

Leschyshyn Streaking
Pats captain Jake Leschyshyn picked up a goal and two assists on Friday against Vancouver to extend his point streak to nine games. The signed prospect of the Vegas Golden Knights has scored nine goals and eight assists in that streak. Leschyshyn’s goal on Friday came on the powerplay, his ninth goal on the man advantage this season which is tied for first in the WHL with the Brandon Wheat Kings Stelio Mattheos. In 20 games this year, the product of Saskatoon has 14 goals and 14 assists for 28 points which is tied for 11th most in the WHL.

Five Straight for Pratt
Pats forward Austin Pratt picked up an assist in the third period on Friday to move his point streak to five games. The 19-year-old has three goals and four assists in that stretch. Pratt has 10 goals and 10 assists for 20 points and has matched his point total from all of last year when he had seven goals and 13 assists in 60 games between the Red Deer Rebels and Regina Pats. Pratt’s 20 points is tied for 40th in the Western Hockey League.