PREVIEW: Pats look to bounce back Saturday at home to Vancouver 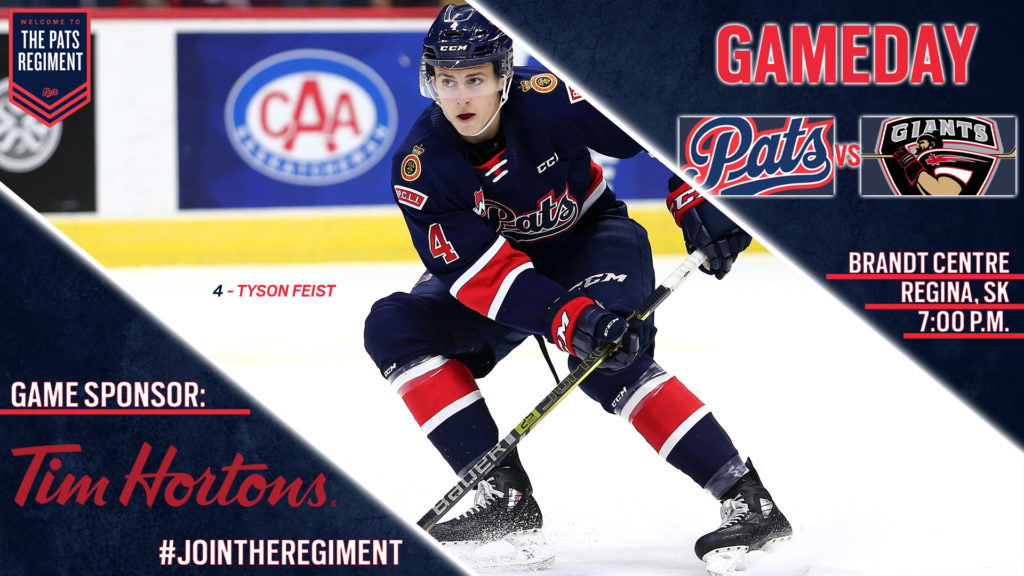 The Regina Pats (1-7-0-0) are back in action on home ice on Saturday when they host the Vancouver Giants (5-5-0-0). Puck drop is at 7:00 p.m. at the Brandt Centre. The Pats are coming off a 5-3 loss at home to the Edmonton Oil Kings on Tuesday, a seventh straight defeat. The Giants last game was in Moose Jaw on Friday where they picked up a 4-1 win over the Warriors. Tuesday will mark the first and only meeting between Regina and Vancouver in the 2019-20 season. Tonight’s game can be heard with Bennett Dunlop Ford Pats Hockey starting at 6:35 p.m. on 620 CKRM and will also be broadcast on Access 7.

Quick Facts
-The Pats and Giants meet for the first and only time in 2019-20 Saturday at the Brandt Centre.
-Regina has gone 4-4-1-1 in the last 10 meetings with Vancouver.
-The Pats are 1-4-0-0 on home ice this season.
-Regina acquired 20-year-old defenceman Zach Wytinck from the Brandon Wheat Kings on Wednesday. He will make his Pats debut against the Giants Friday.
-Dawson Holt cleared WHL waivers on Thursday, leaving the team with three overage players, Austin Pratt, Robbie Holmes and Zach Wytinck.
-Austin Pratt is coming off his third multi-point game of the year, he had a goal and an assist against Edmonton Tuesday.
-This is the second of three straight home games for the Pats, they will head out to Alberta for the first time this season next weekend to play Lethbridge and Red Deer.

Pats Acquire Wytinck from Brandon
The Regina Pats Hockey Club is pleased to announce they have acquired overage defenceman Zach Wytinck from the Brandon Wheat Kings in exchange for a fifth-round pick in the 2022 WHL Bantam Draft. He is playing in his fourth season in the WHL, he has appeared in 169 games, scoring 10 goals and 60 assists for 70 points, all with the Wheat Kings. The product of Glenboro, Manitoba is off to a good start this year with a goal and two assists in his first seven games. Wytinck put up a career high five goals and 43 points in 65 games last year in Brandon.

Walker on the Board
Pats defenceman Kyle Walker had his best offensive game of the year on Tuesday against Edmonton, scoring his first goal of the season and adding an assist. His first period goal snapped a stretch of over 175 minutes without a goal for the Pats. He added an assist on the Pats third goal of the night late in the first frame. The 19-year-old leads all Pats defenceman with three points through his first eight games of the year.

Last Pats Game
The Regina Pats saw a 3-0 first period lead evaporate in a 5-3 home loss to the Edmonton Oil Kings on Tuesday night. The Pats scored the game’s first goal four minutes in, Kyle Walker snapped a shot from the left side, and it took a couple bounces before finding the back of the net. Just over a minute later, Robbie Holmes finished off a rebound off the post for his third and it was a 2-0 game. Then in the dying seconds of the period, Austin Pratt snapped home his third from the slot and Regina took a 3-0 lead to the break. In the second, the Oil Kings ate into the Pats lead with goals from Liam Keeler and Jalen Luypen and it was a 3-2 game after 40 minutes. In the third, the Oil Kings scored twice in the opening two minutes to take a 4-3 lead. Edmonton added another midway through the frame and took the victory in a 5-3 final. The Pats were outshot 39-18, the powerplay was oh for four and the penalty kill went four for five. Austin Pratt and Kyle Walker led the Pats with a goal and an assist, while Max Paddock made 34 saves.

Last Pats Game Vs Vancouver
November 16, 2018 – Nick Henry scored three times and had an assist for the Regina Pats in a 10-4 loss in Vancouver. Jake Leschyshyn put up a goal and two assists while Aaron Hyman had two helpers. The Giants were led by Milos Roman and Davis Koch who each had three-point nights, while six others put up two points. Max Paddock and Dean McNabb combined to make 35 saves for Regina, Trent Miner stopped 27 of 31 for the Giants.