PREVIEW: Pats Look For Redemption Versus Broncos At Home 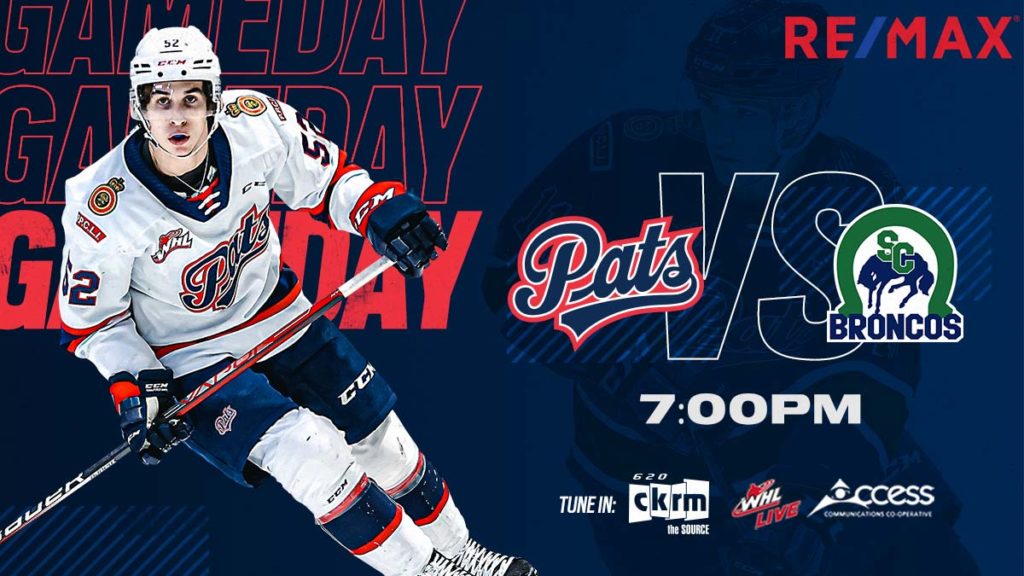 Regina, Sask. – The Regina Pats rematch the Swift Current Broncos on Saturday at 7:00 p.m. inside the Brandt Centre as the club ends their six game season series against Swift Current.

It’s also the second game of this home-and-home against the Broncos as these two clubs last met on Friday inside the InnovationPlex with the Broncos defeating the Pats 4-2, ending Regina’s three game winning-streak. The Pats opened the scoring early in the first and took a 2-1 lead early in the third after the game was 1-1 after two. The Broncos would fire back with three unanswered goals to close out their 21st win of the season.

These two clubs are now tied for seventh in the Eastern Conference standings with 44 points.

79: Number of points (37G-42A) in 32 games for Pats captain Connor Bedard leads the WHL…his 42 assists are first and his 37 goals are also first…the North Vancouver, BC product is also on a 31 game point-streak with all 79 points during that time.

54: Points for Alexander Suzdalev leads all WHL rookies…his 23 goals also lead all rookies while his 31 assists are first…the Washington Capitals 2022 third-rounder has points in 24 of his last 29 games (17G-28A-45PTS)…his 13 PPG are tied for second the WHL.

8: Points (1G-7A) over Tanner Brown’s last eight games, with points in five of his last seven games and two multi-point outings during that stretch…the Kelowna, B.C. product is two games away from 200 in his WHL career.

6: Six assists in three games for defenceman Stanislav Svozil since coming back from the World Juniors on Jan. 13…the Czechia product is third amongst all defencemen in assists with 38, while leading a D-men in points per-game (1.39).

3: Three game point-streak (2G-1A) for forward Braxton Whitehead…three of his five goals this season have come since January 1st, with two of them scored short-handed…last year, seven of his 10 goals came in the second-half (Dec. 27 – Apr. 17).