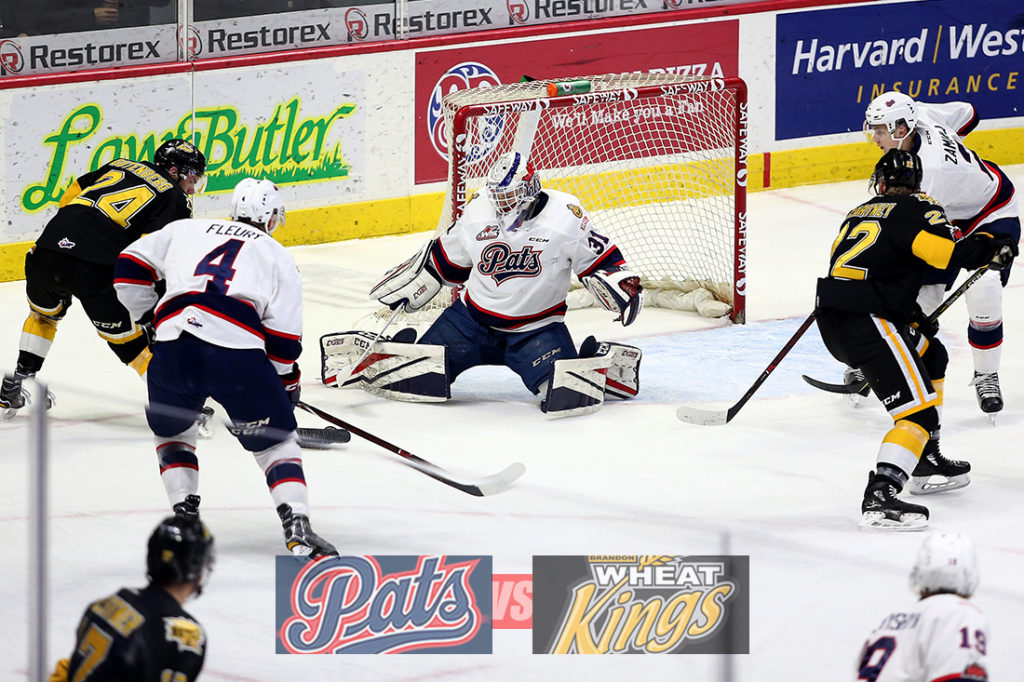 The Regina Pats (19-18-3-0) carry a three game win streak into Wednesday night when they host the Brandon Wheat Kings (25-11-0-1). Puck drop is at 7:00 p.m. at the Brandt Centre. The Pats were last in action on Monday when they beat the Prince Albert Raiders 5-4 in overtime. The Wheat Kings last game was Sunday against Moose Jaw and the Warriors took the win 6-2. Tonight is the seventh of eight meetings between the two clubs in 2017-18, The Pats hold a 3-3-0-0 record so far in the season series. The game can be heard starting at 6:35 with Bennett Dunlop Ford Pats Hockey on 620 CKRM.

The Lead Up: Pats ring in 2018 with OT win over P.A.
Matt Bradley scored the overtime winner as part of a three point night and the Pats won a third straight game, 5-4 over the Prince Albert Raiders on Monday night at the Brandt Centre. The Pats got the lone goal of the first period when Dawson Davidson scored shorthanded for his seventh of the season and it was 1-0 after one. The second period was all Prince Albert, scoring three times to make it 3-1 heading to the third. In the final frame, Josh Mahura (12), Nick Henry (6) and Jake Leschyshyn (12) scored in a span of 2:38 to take a 4-3 lead. The Raiders responded with a powerplay goal with just under seven minutes left which eventually forced overtime in a 4-4 game. The Pats then got the game winning goal off the stick of Matt Bradley, his team leading 24th, and Regina took the extra point, 5-4 the final score. Bradley and Josh Mahura each had a goal and two assists, Robbie Holmes put up two points and Tyler Brown made 27 saves in the win. The Pats outshot the Raiders 39-31, the powerplay went oh for three and the penalty kill two for four.

Head to Head
Tonight is the seventh of eight meetings between the Pats and Wheat Kings. Regina is 3-3-0-0 in the season series and the home team has won every game so far. Dawson Davidson leads Regina with a goal and six assists against the Wheat Kings while Matt Bradley has scored five times and has an assist. Brandon’s Ty Lewis has put up 13 points against Regina, Stelio Mattheos has 11 and Tanner Kaspick eight.

Leschyshyn Rolling
Vegas Golden Knights prospect Jake Leschyshyn is enjoying his best offensive stretch of the season. The 18-year-old is riding a three game point streak with two goals and two assists. The Saskatoon product has recorded at least a point in 11 of his last 13 games with seven goals and six assists in that stretch. Leschyshyn is up to 24 points in 35 games, 54 percent of those points have come in his last 13 contests. Leschyshyn leads the club with two short-handed goals and is second on the team with four game winning goals, one behind Matt Bradley who has five.