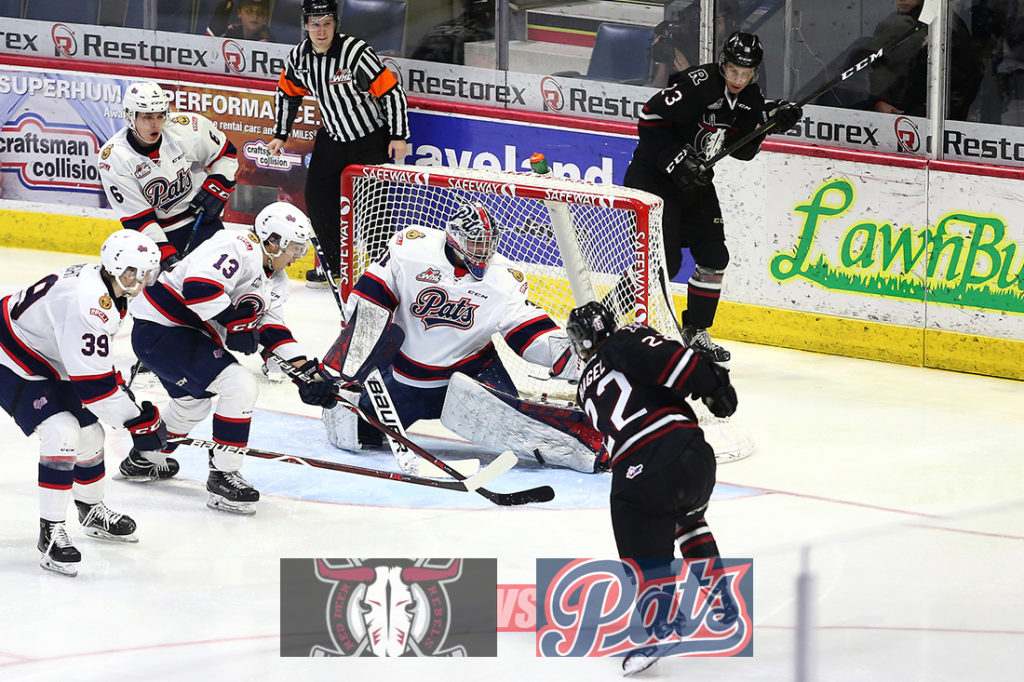 The Regina Pats (18-39-1-2) return to home ice on Wednesday night to take on the Red Deer Rebels (29-24-4-1). Puck drop is at 7:00 p.m. at the Brandt Centre. The Pats are coming off a 5-2 loss in Moose Jaw to the Warriors on Saturday but have won three straight games on home ice. The Rebels were last in action on Saturday, losing a fifth straight game, 5-2 to the Edmonton Oil Kings. Tonight is the fourth and final meeting between Regina and Red Deer in 2018-19, the Pats are 1-1-0-1 in the season series. Tonight’s game can be heard with Bennett Dunlop Ford Pats Hockey starting at 6:35 p.m. on 620 CKRM and the game will be broadcast on Access 7.

The Lead Up: Pats fall 5-2 in Moose Jaw Saturday afternoon
The Regina Pats fell 5-2 in Moose Jaw to the Warriors on Saturday afternoon. In the first, the Warriors went up 1-0 on a powerplay goal from Tristin Langan at the midway point of the period. Moose Jaw doubled their lead with just under four minutes left in the first thanks to Brayden Tracey and it was 2-0 after one. In the second, the Pats powerplay struck just over a minute into the period, Brady Pouteau snapped his fourth of the year into the top of the net to make it 2-1. 10 minutes later, Garrett Wright carried the puck into the right Moose Jaw circle and ripped home his sixth inside the far post to tie the game at two for Regina. It stayed that way until late in the frame when Moose Jaw scored twice in under a minute and led 4-2 after two. In the third, the Warriors scored the period’s lone goal and won the game 5-2. The Pats were outshot 35-17, the powerplay was one for three, the penalty kill went three for four and Max Paddock made 30 saves.

Wright Rolling
Pats rookie forward Garrett Wright has found his offensive touch in the month of February. The 17-year-old has goals in back to back games and has scored three times in his last five contests. Four of the rookies nine points on the season have come in the last seven games of the year. Wright, from Mesa, Arizona, was listed and signed by the Pats during the 2017-18 season and has six goals and nine points in 55 games this season. Wright has scored on 11.1 per cent of his shots on goal this season (six for 54). He ranks fourth on the club in shots on goal by a rookie with 54.

Alkhimov Chipping In
Pats forward Sergei Alkhimov has found the scoresheet with consistency over his last five games. The 17-year-old rookie has an assist in four of his last five contests to reach 23 points on the season. The product of Moscow, Russia has put up four goals and seven assists for 11 points in the 26 games since the Christmas Break. His 23 total points is tied for 21st among all Western Hockey League rookies and his 11 goals is tied for 16th. Alkhimov’s 23 points are fourth most on the Pats this year, behind Austin Pratt (47), Ty Kolle (24) and Riley Krane (24).

Pouteau’s Good Stretch
Pats defenceman Brady Pouteau is enjoying a good stretch offensively. The 21-year-old has scored twice and added two assists in his last four games. Pouteau missed significant time to begin the season but has found his game in the second half of the year, scoring all four of his goals and six of his eight assists this season since January 11, a span of 18 games. A product of Oak Bluff, Manitoba, Pouteau has played in 193 games in the Western Hockey League, scoring eight goals and 36 assists for 44 points. He has 83 penalty minutes in his career and 145 shots on goal.