PREVIEW: Pats Look for Bounce Back Effort in Kamloops Friday 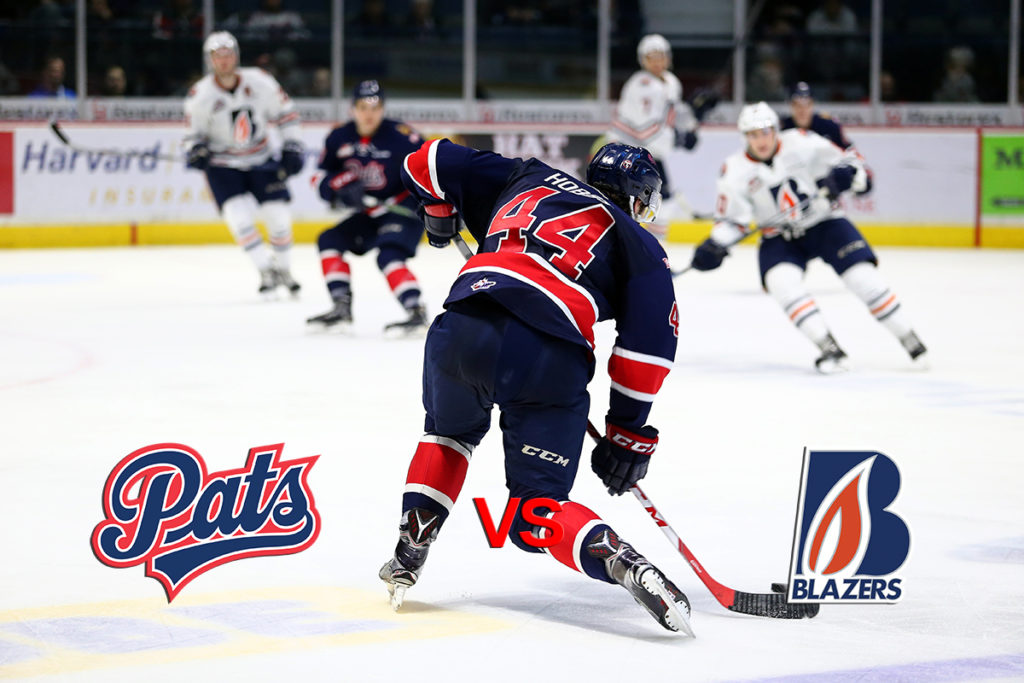 `The Regina Pats (16-2-3-0) are in Kamloops on Friday night, looking to bounce back against the Blazers (14-11-1-0). Puck drop is at 9 p.m. Regina time at the Sandman Centre. The Pats gave up two empty netters late and lost in Prince George to the Cougars on Tuesday 5-2. The Blazers hosted the Spokane Chiefs on Wednesday and dropped a 3-2 decision. Today is the first and only meeting of the season between the two clubs. Tonight’s game can be heard on 620 CKRM with Bennett Dunlop Ford Pats Hockey beginning at 8:35 p.m.

Lead Up: Slow Start Sinks Pats in Prince George
The Regina Pats got off to a slow start in Prince George on Tuesday night and lost to the Cougars 5-2 at the CN Centre. The Cougars scored three times in the first 13:30 of the opening frame. Austin Wagner got the Pats on the board with his 10th late in the period and it was 3-1 after one. After a scoreless second, Sergey Zborovskiy scored a powerplay goal to get the Pats within one early in the third. It stayed 3-2 until late when the Pats pulled Tyler Brown for the extra attacker. Prince George scored twice into the empty net and won the contest 5-2. Tyler Brown stopped 24 of 27 shots in the loss. Lane Zablocki led the offense for the Pats with two assists.

Brooks & Harrison Keep it Going
Pats captain Adam Brooks and defenceman Chase Harrison kept their respective point streaks going in Tuesday’s loss to Prince George. Harrison picked up an assist and now has his streak to 16 games with four goals and 17 assists in that stretch. Harrison also leads the WHL at plus 28 in 21 games played. Brooks picked up a helper in Prince George and his point streak is at 15 games entering tonight. He has a point in every game since returning from training camp with the Toronto Maple Leafs and Toronto Marlies. Brooks has scored eight goals and has 25 assists over his streak and leads the league in points-per-game at 2.20. The two streaks are the longest in the WHL so far this season.

Dynamic Duo
Pats forward Austin Wagner has scored 63 goals in his WHL career (including playoffs). Of those 63 goals, linemate Adam Brooks has had the initial assist on 34 of them, 53.9 per cent. If you include second assists (7) and eliminate the unassisted goals (9), Brooks has been in on just over 75 per cent of Wagner’s career tallies. Conversely, of Adam Brooks 87 career goals, Wagner has picked up the first assist on 19 of them (21.3 per cent). Add 11 more second assists and Wagner has been in on 34.5 per cent of Brooks career WHL goals.

Powerplay On Fire
The Pats powerplay is riding a nine game goal streak heading into Friday night against the Blazers. The club is 18 for 46 in those nine games for a 39.1 per cent efficiency. Adam Brooks has a goal and nine assists on the powerplay in the last nine games. Connor Hobbs one goal, eight assists, Filip Ahl six goals, Sam Steel three goals and four assists, Jake Leschyshyn one goal and five assists and Nick Henry has one goal and three helpers. Filip Ahl is currently tied for second in the WHL with nine goals on the man advantage and as a team the Pats are leading the league with a 31.4 per cent efficiency on the powerplay, going 32 for 102 in their first 21 games.