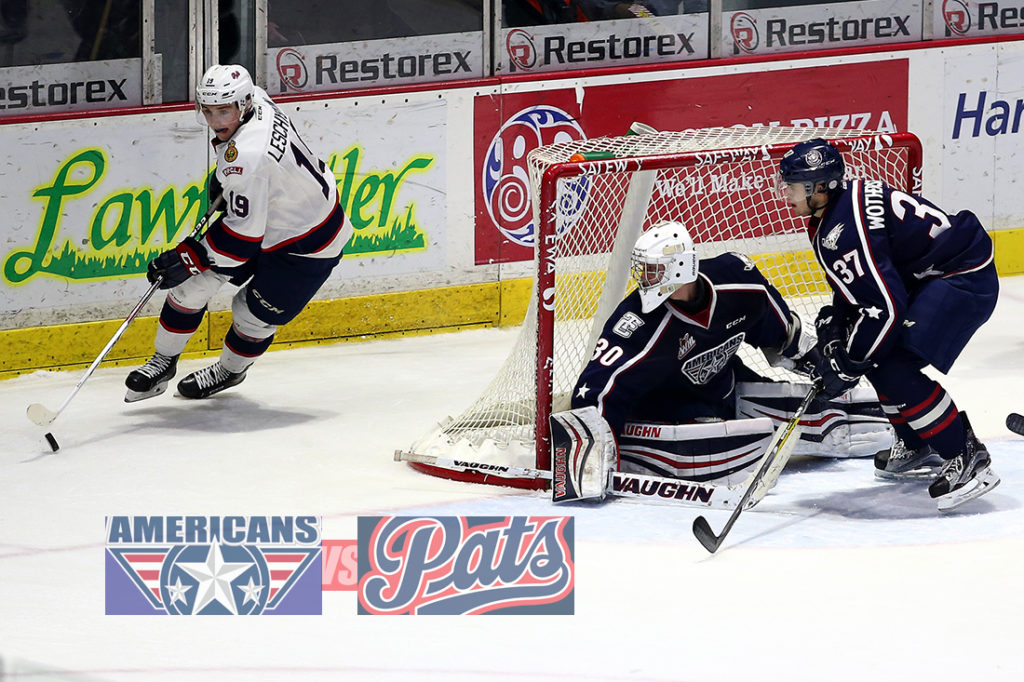 The Regina Pats (5-12-0-0) kick off a two-game home weekend on Friday night against the Tri-City Americans (10-4-0-0). Puck drop is at 7 p.m. at the Brandt Centre. The Pats last game was on Saturday night when they beat the Saskatoon Blades 6-5 at the Brandt Centre. The Americans kick off their East Division road trip tonight, their last game was Friday in Everett where they beat the Silvertips 4-2 for a sixth consecutive victory. Tonight is the first and only meeting between the Pats and Americans in 2018-19. Tonight’s game can be heard with Bennett Dunlop Ford Pats Hockey starting at 6:35 p.m. on 620 CKRM and will also be broadcast on Access 7.

The Lead Up: Pats win wild one over Saskatoon Saturday
The Regina Pats got two goals and an assist from both Jake Leschyshyn and Nick Henry to beat the Saskatoon Blades 6-5 at the Brandt Centre on Saturday night. The Blades opened the scoring on the powerplay, but the Pats responded with goals from Nick Henry, his seventh and Duncan Pierce, his fourth, to lead 2-1 after one. In the second, Austin Pratt picked up his eighth to extend the lead to 3-1 and that chased Blades goaltender Nolan Maier, 31 seconds into the period. The Blades got one back from Tristen Robins and trailed just 3-2. Jake Leschyshyn restored the two-goal lead on the powerplay with his eighth and the Pats led 4-2. Saskatoon came back with three in the final 7:11 of the period, two of them on the powerplay and led 5-4 at the break. In the third, Nick Henry set up Jake Leschyshyn back door for his second of the night and ninth of the season to tie the game at five. The Pats went to their second powerplay in the final five minutes, and on it, Nick Henry hammered home the game winner from the right point into the top corner for his second of the game and eighth of the season to make it 6-5 and that was the final. The Pats were outshot 32-25 in the win, the powerplay was two for two and the penalty kill three for six. Nick Henry, Jake Leschyshyn and Aaron Hyman led the way with three-point nights, while Max Paddock and Dean McNabb combined to make 27 saves.

New Career High
Pats defenceman Aaron Hyman has reached a new career high for points in a season thanks to his three-assist night on Saturday against the Blades. The 20-year-old has four goals and 13 assists for 17 points on the year. His previous career high was 16 points in 2016-17 with Calgary and Seattle. Hyman recently surpassed his previous career high in goals as well with his fourth. Hyman’s 17 points rank sixth among all WHL defencemen, his 14 assists are fifth most and his four goals are in a tie for ninth.

Top Line Success
The Pats top line of Jake Leschyshyn, Nick Henry and Austin Pratt is on a roll entering Friday night. The three have combined to score 15 goals and 16 assists for 31 points in the last seven games. Henry is riding a seven-game point streak with six goals and six assists, Leschyshyn has points in five straight with four goals and five assists, while Austin Pratt has four goals and four assists in that stretch. This season, the line has combined for 25 goals and 59 points through 17 games.