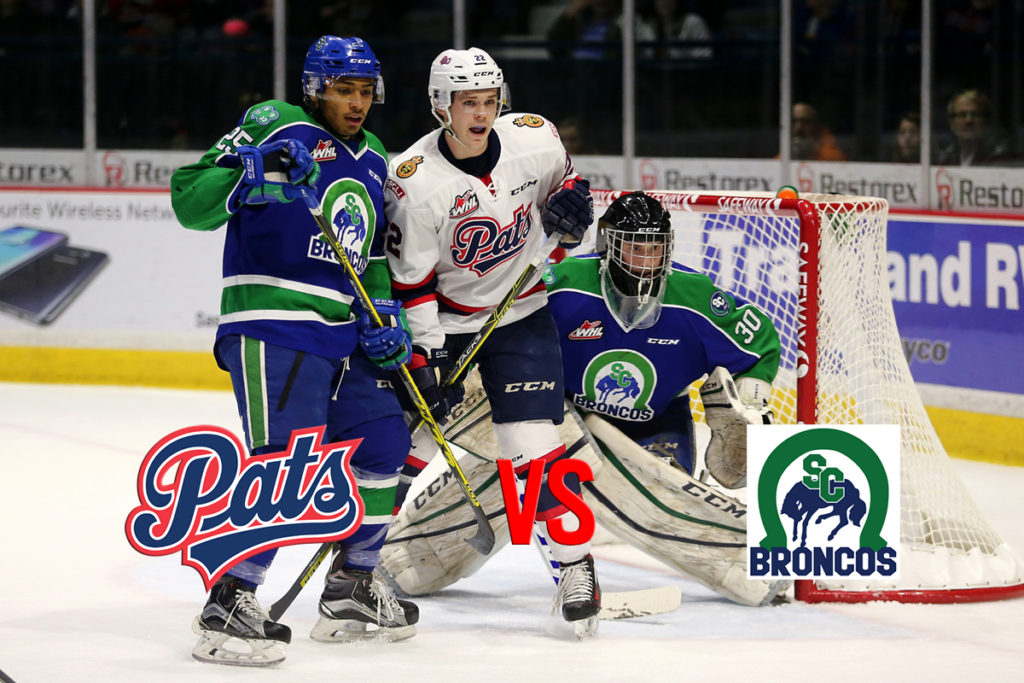 The Regina Pats (18-2-4-0) start a three game road trip Sunday afternoon in Swift Current against the Broncos (15-8-2-4). Puck drop is at 4 p.m. at the Credit Union Iplex. The Pats are coming off a 12-2 win over the Prince Albert Raiders at the Brandt Centre on Saturday night. The Broncos were last in action on Friday and beat the Calgary Hitmen 5-1. Today is the first of eight meetings between the Pats and Broncos on the year. The game can be heard on 620 CKRM with Bennett Dunlop Ford Pats Hockey beginning at 4:35 p.m.

Five Or MoreLead Up: Zborovskiy’s Career Night Leads Pats Past Raiders
Sergey Zborovskiy scored twice, had five assists and was a plus eight to lead the Pats to a 12-2 win over the Prince Albert Raiders at the Brandt Centre on Saturday night. Adam Brooks had an outstanding night as well with two goals and two assists and his point streak has hit 18 games (11G, 31A). The Pats scored four times in each of the three periods in the victory. Jonathan Smart had two assists in his Pats debut and in total nine players had multi-point games. Tyler Brown stopped 14 of 16 shots and improved to 11-2-3-0 on the year.

The Regina Pats scored 12 times in their win over Prince Albert at the Brandt Centre on Saturday night. It was the second time the club had hit double digits in a game, the first coming November 2 against Kootenay (10-2). For the season the Pats have scored six or more goals in 11 of 24 games, that’s 45.8 per cent of the contests. The Pats have scored five or more in 14 of their games and four or more in 18 of 24. The club is averaging 5.58 goals per game and 42.75 shots per game. The Pats average a goal for every 7.65 shots on goal for a shooting percentage of 13.06 %.

Back On Top
Pats captain Adam Brooks is back atop the WHL scoring list. The Maple Leafs prospect led the WHL with 120 points last year and in 18 games this year, the Winnipeg product has 42 points (11G, 31A). Saturday night’s four point effort pushed him past teammate Sam Steel who is currently in second with 41 points. Brooks has at least a point in all 18 games he has played on the year and is averaging 2.33 points per game. He is the reigning WHL Player of the Month for November.

Smart Debut
Jonathan Smart made his Regina Pats debut on Saturday night against the Prince Albert Raiders. The 17-year-old who was acquired from the Kelowna Rockets on Wednesday had two assists and was a plus five in the contest. Smarts first point came early in the second period on Riley Woods third of the year. Then on the powerplay, Smart assisted on Connor Hobbs 11th. For the season, Smart has a goal and eight assists and has set a new career high with nine points. Smart is a ‘C’ ranked skater by the NHL’s Central Scouting Service as a potential fourth to sixth round selection in the 2017 NHL Entry Draft.