PREVIEW: Pats kick off the new season at home to Moose Jaw Friday 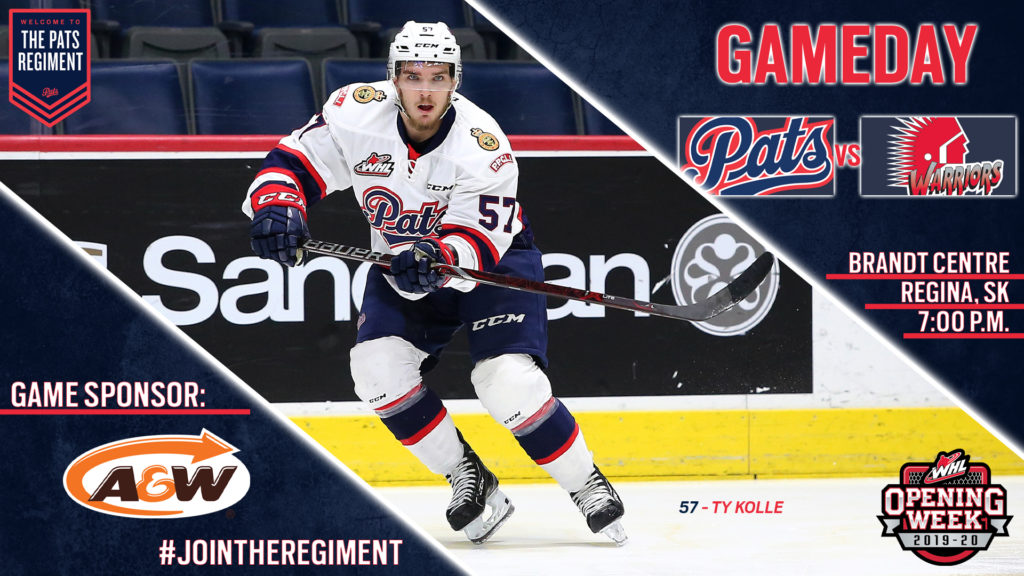 The Regina Pats (0-0-0-0) kick off the 2019-20 regular season on Friday night in their home opener against the Moose Jaw Warriors (0-0-0-0). Puck drop is at 7:00 p.m. at the Brandt Centre. The Pats are coming off a seven-game pre-season schedule where they carried a record of 2-3-0-2, most recently dropping a 5-2 decision in Prince Albert on Saturday. The Warriors played seven pre-season games as well, going 2-5-0-0. Friday will mark the first of eight meetings between the Pats and Warriors in 2019-20. Tonight’s game can be heard with Bennett Dunlop Ford Pats Hockey starting at 6:35 p.m. on 620 CKRM and will also be broadcast on Access 7.

Quick Facts
-The Pats open the regular season against the Warriors for just the second time since 1996-97 and first time since 2015-16 when both teams picked up a home win to kick off the year.
-Regina is 3-4-1-0 on opening weekend over the last four years with two of the three wins coming on home ice.
-The Pats had one win against Moose Jaw in 2018-19, it came at the Brandt Centre.
-Austin Pratt scored three goals and had five points against Moose Jaw last season.
-The Pats roster features 16 players returning from last years squad, six others are WHL rookies.

Pats name Leadership Group for 2019-20 season
Saturday, the Pats named Austin Pratt the 79th captain in franchise history. The 20-year-old is entering his fifth season in the Western Hockey League and third as a member of the Pats. Last year, he set career highs with the Pats, scoring 25 goals and 51 points to lead the team in scoring. Forward Logan Nijhoff, defenceman Kyle Walker and defenceman Nikita Sedov were all named Alternate Captains on Saturday as well.

Pats Trade McNabb, Acquire Belluk
The Pats got a year younger at the backup goaltender position on Monday, trading 19-year-old netminder Dean McNabb to the Winnipeg ICE for a 7th round pick in 2021. Regina then swung a deal to acquire 18-year-old Danton Belluk from the Everett Silvertips in exchange for a conditional eighth round pick in 2021.

Last Pats Game
The Regina Pats finished their 2019 pre-season schedule with a 5-2 road loss to the Prince Albert Raiders on Saturday night. The Pats opened the scoring just over three minutes into the game when Makai Mitchell hammered home a one-timer from the left point. Ryker Evans and Cole Dubinsky drew assists on the 1-0 goal. The Raiders responded with a powerplay goal at the 11-minute mark to tie the game at one. In the second, Prince Albert went ahead 2-1 when Ozzy Wiesblatt tipped in a shot from Cole Fonstad on the powerplay. The Pats got back to even terms with 16 seconds left in the frame while shorthanded, Robbie Holmes scored on a breakaway for his first of the pre-season and it was 2-2 after 40 minutes. In the third, the Raiders took the lead back when Max Martin got a shot to go off a defender and in to make it 3-2, two minutes in. P.A. got another from Cole Fonstad with less than three minutes left and he would score into an empty net as well in what was a 5-2 final.

Last Pats Game Vs Moose Jaw
March 9, 2019 – Jett Woo, Brayden Tracey and Justin Almeida each put up three points to lead the Warriors to a 6-1 victory at Mosaic Place in Moose Jaw. Garrett Wright provided the lone goal for Regina in the loss, his seventh of the season. Dean McNabb made 31 saves on 35 shots for the Pats, Adam Evanoff stopped 24 of 25 for Moose Jaw.