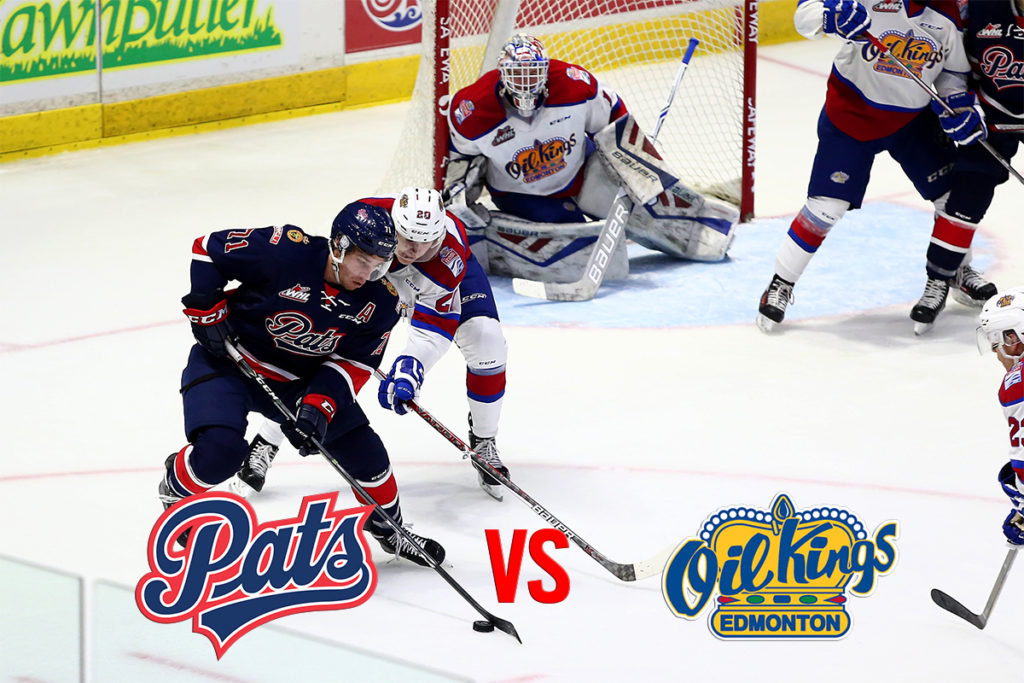 The Regina Pats (14-0-3-0) kick off a six game road trip in Edmonton on Wednesday night against the Oil Kings (8-9-2-0). Puck drop is at 8 p.m. Regina time at Rogers Place. The Pats are coming off an 8-4 win over Red Deer on Sunday, their 10th consecutive victory. The Oil Kings were last in action on Saturday and beat the Kootenay ICE 3-0. The Pats are 1-0-0-0 against Edmonton this year, winning 6-3 back on September 30th. Tonight’s game can be heard on 620 CKRM Bennett Dunlop Ford Pats Hockey beginning at 7:35 p.m.

Lead Up: Pats Down Rebels for 10th Straight Win
A sold out Brandt Centre watched the Regina Pats win their 10th straight game on Sunday, 8-4 over the Red Deer Rebels. The Pats led 2-1 after one and then exploded for four goals in the second and didn’t look back from there. Sam Steel had a goal and three assists and has taken over the WHL scoring lead with 34 points. Adam Brooks had a goal and two assists and five other Pats had multi-point games. Tyler Brown won his 9th game in 11 starts making 17 saves.

Winning Streak
The Pats carry a 10 game winning streak into Wednesday night. The streak is the longest for the organization since 1985 when the team won 10 in a row from October 13 to November 10. The franchise record for consecutive wins is 18; that happened from November 8, 1954 to January 5, 1955. The Pats enter tonight with 17 games without a regulation loss to start the year. The franchise record without a regulation loss to start a season is 18 games, set in 1964-65 when the team went 14-0-4.

Brooks Named WHL Player of the Week
The Western Hockey League announced today that Regina Pats forward Adam Brooks has been named the WHL Player of the Week for the week ending November 13. Brooks registered six points (1G-5A) in two games to help the Pats go 2-0-0-0. On Thursday versus the Moose Jaw Warriors, Brooks put forth three assists in a 5-4 overtime victory. The 20-year-old product of Winnipeg followed up with a goal and two assists on Sunday, November 13 in an 8-4 win over the Red Deer Rebels. This is the fourth time Brooks has received player of the week honors in his career.