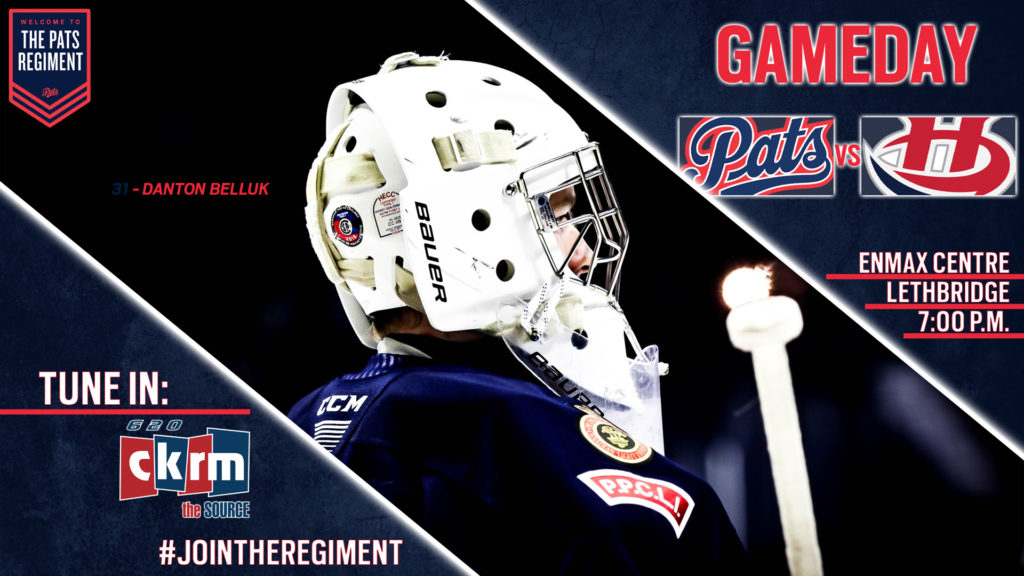 The Regina Pats (1-9-0-0) start a mini two game road trip in the Central Division on Friday against the Lethbridge Hurricanes (5-4-0-1). Puck drop is at 7:00 p.m. at the Enmax Centre. The Pats were last in action at home on Sunday when they dropped a 5-4 decision to the Hurricanes. Lethbridge was in Moose Jaw on Tuesday and blanked the Warriors 6-0. Friday is the second of four meetings between Regina and Lethbridge in the 2019-20 season, the Pats are 0-1-0-0 in the season series. Tonight’s game can be heard with Bennett Dunlop Ford Pats Hockey starting at 6:35 p.m. on 620 CKRM Two via 620ckrm.com.

Season High
The Pats scored four goals in a game for the first time this season on Sunday against Lethbridge. Regina had scored three goals in four of their first nine games, two goals four times and were shutout twice. The Pats have scored 21 goals in their first 10 games. On Sunday, Regina’s powerplay had its best night scoring three times, Austin Pratt and Ty Kolle each picked up their team leading fourth goals of the season, while Sloan Stanick and Logan Nijhoff provided the other markers.

Dubinsky Finding His Stride
Pats 17-year-old forward Cole Dubinsky has found his offensive touch over the last two games. He picked up two assists on Sunday and scored his first goal of the year the night before against Vancouver. Sunday marked the second multi-point game for Dubinsky and he is up to three points in nine games this year, all three coming in the last two games.

Last Pats Game
The Regina Pats comeback came up a goal short at home to the Lethbridge Hurricanes in a 5-4 final at the Brandt Centre Sunday afternoon. The Pats scored 1:09 into the game thanks to Logan Nijhoff, his first of the season. Lethbridge responded five minutes later with goals 16 seconds apart to lead 2-1. Regina drew even with a powerplay goal, Austin Pratt snapped home his fourth from the right side to make it 2-2. However, the Hurricanes went back ahead late in the frame and took a 3-2 lead to the break. In the second, the Hurricanes scored two goals 17 seconds apart, nine minutes into the period and led 5-2. The Pats battled back, Sloan Stanick scored his second and then Ty Kolle snapped home his fourth on a five on three powerplay and it was a 5-4 game after two. In the third, neither team would score, and the Pats fell 5-4. The Pats outshot the Hurricanes 26-24, the powerplay was three for seven and the penalty kill was four for four. Cole Dubinsky and Riley Krane led the offence with two points each, while Matthew Kieper and Danton Belluk combined to make 19 saves.